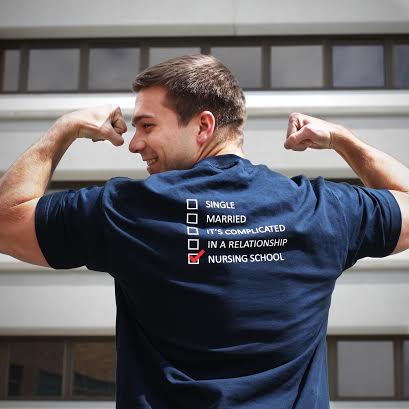 Flexing his big biceps puts an end to any teasing Ryan Strobehn gets for being on the cheerleading squad.

And to preempt jokes about being a male nursing major, Ryan flexes his plans to go to grad school.

“That’s what I make sure people know all the time,” Ryan said.

According to a new student research project, most men in predominantly female majors feel compelled to amplify their ambitions.

“They want to make sure people know that they are going to do something more with their major or go farther in it,” said Martha Shepard, a sociology major who worked on the project.

With mentoring from Professor Ben Gibbs, Martha and three classmates studied “major minorities” students who are a gender minority in their major. The College of Family, Home and Social Sciences named their work the top student research project in sociology this year.

One focus of the study was to examine gender in STEM fields (Science, Technology, Engineering and Mathematics) where women are outnumbered both nationally and at BYU. The student team conducted surveys with 2,761 BYU students and in-depth interviews with 60 who are gender minorities in their major.

A statistical analysis found the importance of role models especially in the years leading up to college. In fact, women whose mothers majored in STEM were 83 percent more likely to major in STEM whether or not their mother made a career of it.

“A role model was very significant for women going into STEM majors, whether it was a mother who studied computer science or even a neighbor talking about going into engineering,” said Jacob Mortensen, a senior majoring in both sociology and statistics.

Meredith Gold Dahl is a physics major and happens to be the first in her family to go into the sciences.

“There is nothing that can really make as much of a difference as a good mentor,” Meredith said. “Seeing women like Professor [Denise] Stephens in the physics and astronomy department reassures me that it is truly possible as a woman, despite the stereotypes, you can balance family, the gospel, and a STEM career without ever sacrificing who you are.”

The sociology students also found that women’s views on careers and family did not make them more or less likely to pursue a degree in STEM.

“The women in STEM weren’t necessarily these trailblazing feminists who wanted to make a point that women could do this,” said Martha, who graduated in April with a minor in women’s studies. “It was more often women who held traditional values or views but still loved STEM. It was more of an innate desire.”

For leaders in the tech sector, one implication is that career and workplace flexibility could go a long way in recruiting more women to their workforce. The project’s findings may also help shape STEM majors, noted Gibbs.

Kyle Nelson and Ian Peacock worked on the project with Jacob and Martha. Ian will return next fall for his senior year and hopes to publish the research in an academic journal.

What McCracken said above is true. My wife, while at a BYU summer camp a long time ago, won two tournaments. Table Tennis and Chess whipped men both times, while I sat and grinned. She could also fly a plane (private pilot), ride a motorcycle and have four kids in six years. Take is easy guys competant and smart women are much more interesting.

I was a Fighter Pilot 60 years ago, an Airline Captain 30 Years ago. I welcomed the addition of femalle pilots and found non better as First Officers. Go for it Ladies!!