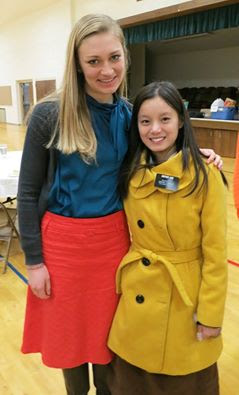 Sister Soe, right, with her companion in the Minnesota Minneapolis Mission.Dear Brother Albright,

Sister Soe was born in Burma. Before the age of two she and her family, who belong to a minority ethnic group known as the Karen people, were forced to flee their village and travel through dangerous territory to a refugee camp on the border of Thailand. The Karen people constitute an indigenous ethnic group in Eastern Burma, representing just 7% of the Burmese population. Many of the Karen people practice Christianity, whereas Burma is a mostly Buddhist nation.  The Karen accuse the Burmese government of “ethnic cleansing” due to campaigns that have led to widespread mass atrocities against the Karen people.

Sister Soe lived in her refugee camp for the next seventeen years of her young life. Her house was a makeshift hut or tent, constructed of bamboo and wood. A vegetable garden near the home provided much of the family’s food. The refugee camp was safe in contrast to the burned-out villages her family had left behind, but it was never a permanent home.   The BBC estimates that up to 200,000 Karen have been driven from their homes during decades of war, with 160,000 more refugees from Burma, mostly Karen, living in refugee camps on the Thai side of the border. The largest such refugee camp is the one in Mae La, Tak province, Thailand, where about 50,000 Karen refugees are hosted. 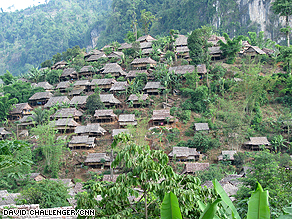 The Mae La camp in Thailand (from CNN News)

“We were always looking for a better place,” Sister Soe said. “Living in a refugee camp is much like a zoo, with a big fence around it. You can’t go out and get a job. You don’t know what things are like back in your old home, or if it’s safe.”  They felt completely isolated, with little news or means of communication with the outside world.

Sister Soe’s parents wanted something better for her and her four siblings. After failed applications to England and Australia, the family was finally granted permission to seek refuge in the United States, where, by happenstance, they ended up in Salt Lake City, Utah.

Sister Soe was raised in a duel-religion household. Her mom was Christian and her father was Buddhist. But when she and her brother walked into the LDS Church building, they felt something different.

“We felt so peaceful and we felt the spirit,” Sister Soe said. “It was so quiet, and they played the organ. I felt like this was the right place I was looking for in my life. This was the true church. I knew that in my heart. My brother felt the same thing.”

They went home, and wondered about this new church, and the spirit they had felt there. They didn’t have to wonder for long. A week later two missionaries knocked on their door.

“We asked them if they were from the same church we had attended. We were so excited to go to church, to the same Mormon Church, but closer to our apartment.”

It didn’t take long for Sister Soe and her brother to be baptized. A few years later, her siblings and mom entered the water of baptism. Her father was the final family member to be baptized in 2012.

“The missionaries brought my family together,” Sister Soe said. “Before, it never felt like our family cared about each other. When the missionaries came to our home, they showed us how to love. We started saying sorry and tried to be nice to each other and make each other happy.”

Joining the church wasn’t the end for Sister Soe. It was a beginning. From the time she heard about the Plan of Salvation, she had a desire to share that message with others.

“When I looked at missionaries, I wished I could be a missionary like them someday. When I talked to [members] I would say I want to go on a mission. How can I be a missionary?’ I tried to be good, to be strong, to reach my goal.”

Sister Soe entered the Missionary Training Center in Provo on the same day in February 2014 as her younger brother, the same brother who joined the church with her.

“We are twins,” she said, “born on the same day, but three years apart. We are very close.”

Even now, on their missions, they are not far apart. While Sister Soe serves in Minnesota, her brother Elder Moe Zaw (the Karen often have different last names in the U.S.) is currently serving his mission in neighboring South Dakota. They write each other once each week. Elder Moe Zaw noted recently that they have more Karen speaking people attending church in their South Dakota branch than English.

Sister Soe also spends a good deal of her time teaching the Karen people who live in the Twin Cities, Minn. With her language abilities and shared cultural history, she has made great inroads in teaching them the gospel.

“I feel the spirit every day. I see miracles happen to me. Today I feel like my dream has come true. I’m so happy.”

As a member of the branch presidency in Salt Lake City of the Karen Branch several years ago, I was thrilled to see so many converts from Burma, speaking three different languages.

I was one of the missionaries that taught this incredible family, but I lost touch with them after I went home. I'm so excited to read about Nyae and Moe serving missions! They are amazing young people. Thank you for publishing this article!

Our ward had a sister missionary whose family survived the massacres in Cambodia. She was the first convert in her family of eleven. All others were then converted and some others served missions. She was just learning English and had the perfect companion to train her. She bore her testimony to us in Cambodian. We didn't understand a word but the Spirit was strong.