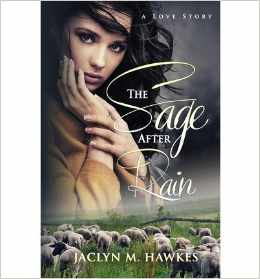 The Sage After Rain by Jaclyn M. Hawkes is a romantic suspense novel with a strong conversion slant. The story revolves around Taya Kaye, a beautiful, young woman engaged to marry a US congressman, who gets in an altercation with him just before a major fund raising event. He angrily slugs her and leaves her bleeding on his office floor. Her parents side with him and walk out on her too. Her injury requires medical care and surgery. The police are called and their investigation results in the discovery of evidence that both her fianc and her lobbyist father are involved in serious criminal activity. The FBI, fearing some of the congressman’s connections may try to silence Taya, attempt to persuade her to go into the witness protection program. Instead she turns to an old college friend and her brother on the Navajo reservation in Colorado. Their father puts her to work as a sheepherder.

Matt Maylon is part of a geological survey crew in Western Colorado and his life is a mess. He woke up with a hangover one morning to discover he’d acquired a roommate. He doesn’t love Stacy. In fact he’s not sure he even likes her or how she came to move in with him. He doesn’t approve of living together before marriage, but she won’t leave or marry him so he doesn’t quite know what to do. His work isn’t going well either, though he spends almost all of his time on the job. His boss and the rest of the crew are more interested in partying than working. He hasn’t been paid for months and he’s afraid his boss is spending the company’s money on booze, drugs, and women instead of paying the crew. He’s worried too that they won’t meet their deadline and he won’t get the final payment he’s been promised.

Taya and Matt meet when their solitary paths cross near a sheep bridge. Soon he is camping near her sheep wagon and they begin to depend on each other in times of trouble and crisis. As they begin to trust and depend on each other they face both four legged and two legged enemies, but Taya also persuades Matt to accompany her to church in the various nearby small towns until it is time for her to return to Washington DC to testify.

Though I liked the story overall, I found a number of problems with it too. It needs some grammar and spelling fixes, the bad guys are not bad or persistent enough, and the ending is stretched out unrealistically because Taya and Matt fail to communicate with each other. Anytime a misunderstanding becomes a major component preventing resolution the story loses credibility. The long sermon on the atonement is well written, but slows the story down in an annoying way.

The characters are likable and the high western desert setting is portrayed well. Having trailed sheep, worked with sheep dogs, and fallen in love with sheep wagons at a very young age, I loved this part of the book. I found the life of a sheepherder an unexpected and clever way for Taya to hide. I particularly liked her dog, Zeus.

Jaclyn M. Hawkes lives with her husband and children in Northern Utah.