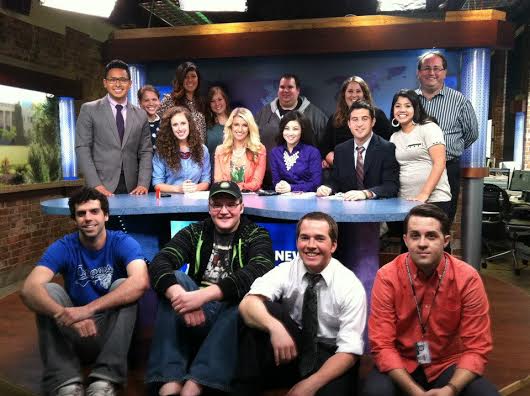 Julianne Horsley, Mary Blanchard and Danielle Ycmat Jansson won three of the nine available awards for students. Other student winners were from schools such as Fordham, Hofstra and George Washington universities. BYU was the only school to have three or more winners.

The Gracie Awards highlight outstanding work in television programming created for women, by women and about women. Past professional winners include Tiny Fey, Katie Couric and Barbara Walters. The three BYU students now join the ranks of those big names, along with the many BYU winners that have come before them. BYU’s student journalists have a history of doing well in the Gracie Awards.

“From the beginning of the program, our professors expect us to be professionals,” Horsley said. “They hold us to the same standards as they would at your first job. It was really hard, but I’m glad they did.”

The students said the hands-on experience they received in the newsroom was specifically beneficial in preparing them for work in the industry. Blanchard said her experiences and watching past students win Gracie Awards helped her produce high-quality work.

“Past students kind of set a precedent that you don’t want to be anything less than the best,” she said.

Kristine Pratt is one of those past students and won a Gracie Award for Outstanding Director just after she graduated in 2010. She’s now a news producer at KSL 5 in Salt Lake City.

“I certainly consider my Gracie Award to be one of my greatest accomplishments, and it gave me, as a college graduate, an extra push to launch into the job world with confidence,” Pratt said.

“It’s empowering for our female students to enter their work in a nationwide competition that emphasizes the professional contributions of women in the media,” Curtis said. “It is then extra gratifying to have their work honored by the Gracies’ judges as being worthy of praise.”

Jansson is now working in marketing and communications for Goldman Sachs in Salt Lake City. Blanchard and Jansson will both complete internships this summer and graduate in August, before looking at entering the world of professional broadcasting.

About the Gracie Awards:

Your Hardest Family Question: How can I make sure my teenage sons don’t turn out like my ex-husband?