LDS Fiction: ‘Longing for Home,’ A Well-Crafted Finish to the Hope Springs Series 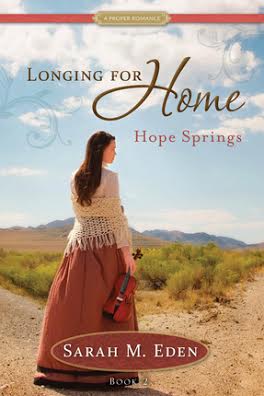 In the past few years Sarah M. Eden has become a favorite of LDS readers, Regency Romance readers, and with the release of her Longing for Home two-book series, she has captured the hearts of Historical fiction readers as well. Hope Springs, Book 2 in the series has recently been released. It continues the story of Katie Macauley from the first book, a young Irish woman who has suffered terrible hardships in her short life.

Katie blames herself for the death of her younger sister who died of cold and malnutrition after her family was expelled from their small farm in Ireland. As a child Katie survived a terrible fire, then the loss of several toes due to the severe cold and inadequate shelter and clothing. Her parents abandoned her to live a life of servitude when she was just eight. Following years of abuse, she made her way to America where employment opportunities were better and after a few years she traveled west to Wyoming to accept a housekeeping position.

Two good men make an impact on her life and heart, Tavish and Joseph. Irish Tavish is fun and brings laughter and caring into her life. He’s willing to give up his life and family to return to Ireland to see her dying father if she wants to go. His family welcomes her as one of them. American Joseph is strong and serious with the ability to draw out Katie’s own strengths. He’s also the widowed father of two little girls Katie has grown to love. Both men love her and hope to marry her. In Hope Springs, Katie struggles to discover which she should choose.

Hope Springs is a small, isolated Wyoming town divided by hate and distrust. The Irish live on one side of town and everyone else on the other. As a harsh early winter descends on the community, the Irish are in danger of freezing or starving to death because of the actions of the other half of the community. Katie makes one sacrifice after another to keep peace and help others.

Fear escalates as insults are hurled, stock is stolen, property damaged, individuals are beaten senseless, and fires are set. Joseph seems to be the only one capable of maintaining a semblance of control as he holds the mortgages to most of the farms and businesses of both sides of the community. There comes a point where not even he can rein in the hate and bigotry.

The book is long, almost 400 pages, and the greater portion deals with the prejudice against the Irish and the feud between the “Irish Road” and the “Red Road.” It’s not a quick, light read and though the romance element is a strong component of the story, the history of the Irish and the treatment given them are more vital to the story than the romance. The characters are developed well and their growth and adjustment to the realities of their lives are portrayed realistically, allowing the reader to feel a real attachment to these people. The plot doesn’t hold a lot of surprises and is perhaps a little too drawn out, but is nonetheless compelling and holds the readers interest. There are a few confusing point of view switches, but for the most part the formatting and copyediting are commendable. I found the ending a little too tidy, but I prefer that to a lot of dangling loose ends and unresolved issues. This is a well-crafted book offering hope over hate.

Sarah M. Eden lives in Utah with her husband and children. Her popular novels have been Whitney finalists several times.