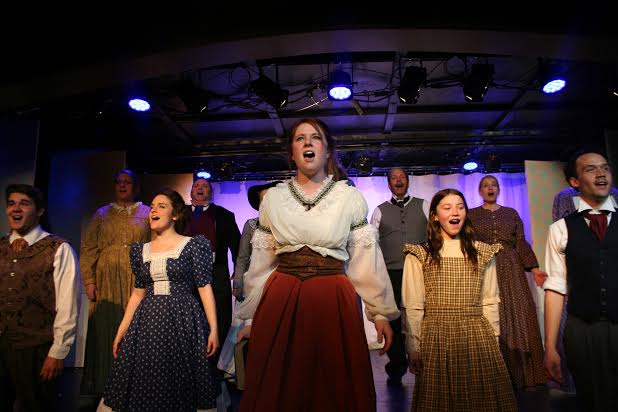 Brigham Young was a great supporter of the theater and the power of fictional drama to convey timeless values. He famously said that “the stage can be made to aid the pulpit in impressing upon the minds of a community an enlightened sense of a virtuous life” (Discourses of Brigham Young, 243). The new community theater Brigham’s Playhouse, located in charming Cottontown Village in Washington, UT (near Saint George), is dedicated to that philosophy, promising to offer a lineup of wholesome and uplifting family productions.

The story of Brigham’s Playhouse is a mini-miracle on its own. Founder Jaime Brigham Young left a 19-year position as a theater professor to found his own production company. He purchased an old town hall and, six weeks after taking residency, he and his talented cast (who are also the crew and managers) renovated it, built a 200 seat theater, and mounted a new musical adaptation of Little Women (not the Broadway version).

It shouldn’t have worked, and to be honest my expectations were shaky. To my delight and surprise, however, the production was a terrific success. We were there on opening night, and the well-cast actors were energetic and polished, showing no signs of first-show jitters. Everyone had terrific voices and the play was a touching, funny, and spiritually-moving adaptation of the classic novel. The seats were comfortable and the location was intimate and warm.

If you go, make sure to stop by The Red Barn, which offers hand-churned ice cream in a variety of flavors along with many other delightful treats. My wife and I had a terrific date night. Little Women is appropriate for all ages, but as its running time is over two hours, it is recommended for playing through March 29, and will be followed by a production of Annie running April 4 through May 17th. For tickets and information visit www.brighamsplayhouse.com. For updates and deals, “like” Brigham’s Playhouse on Facebook.