Finding a Target for Tumor Suppression

Study of proteins opens a new avenue for cancer researchers 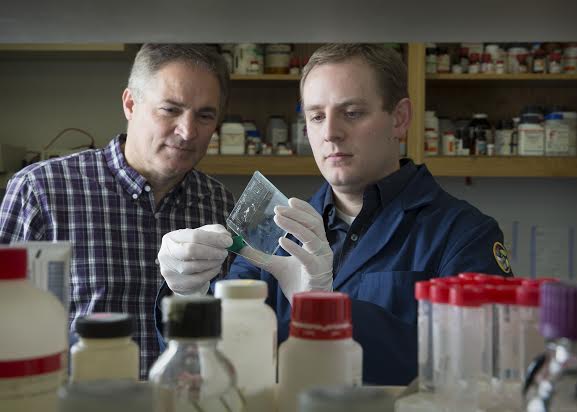 One of the hopes for victory against cancer hinges on naturally-occurring proteins whose job is to make their host cell die.

Since their natural role is to stop unhealthy cell proliferation, the idea is that one or more of these proteins could be harnessed to stop the growth of tumors.

Brigham Young University scientists recently stumbled onto one potential tumor suppressor with an especially ominous name: Programmed Cell Death Protein 5 (aka PDCD5). What they found opens a new avenue for cancer researchers; in fact, the Journal of Biological Chemistry recognizes the work as their research paper of the week.

It’s tricky to find how and where potential tumor-suppressing proteins do their work inside live cells. Although other labs actively hunted for PDCD5’s cellular workplace, the researchers who actually found it weren’t looking for it at all.

But proteins are like teenagers in a sense: You can learn a lot by noticing who they hang out with. So the Willardson group went in search of the chaperone’s buddies.

“It’s a great type of experiment because it tells you things that you may not have considered,” Willardson said.

So when they spotted PDCD5 hooking up with their protein, they wondered if its tumor suppressor ability was linked to the chaperone.

To get a closer look at the pairing, the BYU team collaborated with scientists in Madrid who operate a cryo-electron microscope in Spain’s National Center of Biotechnology. Their images showed how the mysterious Programmed Cell Death Protein 5 could block the production of tubulin, the material that cells use as scaffolding during cell division.

What this means for cancer research

Hundreds of proteins have been targeted for their potential to suppress tumors. This study identifies how one of those proteins may keep the growth of healthy cells in check.

“We’ve provided information on how this protein functions, and it needs to remain functional to be a tumor suppressor,” Willardson said. “It really is just a first step, but it gives us a direction we want to follow.”

This work was a collaboration between Willardson’s lab, BYU biochemistry professor John Prince’s lab and the group in Madrid. Six current and former BYU students also co-authored the study.