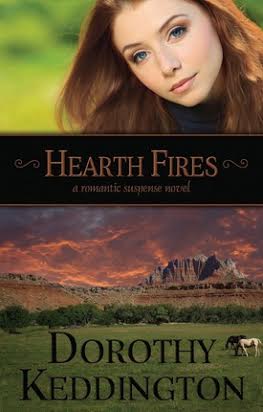 Mackenzie Graham has the career of her dreams, writing feature stories about interesting architecture for a home magazine. Hearth Fires by Dorothy Keddington begins with Mackenzie’s assignment to visit a storybook home near Carmel, California. She finds the exterior of the house fascinating and is disappointed when no one answers the doorbell. Thinking the couple she is to meet with might be in the back, she goes around the house to the back and is amazed by the beautiful view. She begins snapping pictures and quickly finds herself in big trouble with four threatening men. She retreats to her car, stuffs her camera in her purse, and hurries away. Disappointed she contacts her editor, then spends the afternoon walking on the beach. While she is walking someone breaks into her car and the only thing missing is her camera bag. When she returns to her motel room, she finds it completely trashed and her laptop gone. Again she calls her editor who invites her to spend the night at her home.

The following day it becomes obvious she is being followed and she suspects the photos she shot at the storybook house are the reason why. She evades her tail and goes to the police. The detective she meets with identifies the people in the pictures, one of which is the detective left in charge while the police chief is out of town, a judge, and a well-known drug lord and one of his associates. She narrowly misses being shot, is injured in a serious car accident, and the cop who befriended her smuggles her out of town with the help of his brother who takes her to his ranch in Southern Utah. She isn’t out of danger yet. A gun battle and a herd of rampaging rodeo bulls play a prominent role in reaching the denouement. Then there’s the matter of a game of hearts between Mackenzie and her rescuer.

Though her books, including this one, are not explicitly LDS, Keddington is frequently credited with being one of a handful of LDS writers who pioneered novels for and about LDS people. Her books support LDS values without straying into doctrinal preaching or directly referencing the Church. Her warm, easy style has led to a large following of readers and serve as encouragement for many LDS novelists who wish to write stories set within the framework of their own culture and values.

In this novel the main characters are strong, intelligent, and likable. Their growth is handled well, but I would have liked a little more background for William. There are resolutions that take place off stage which would have been better closer to the main characters. The romance portion of the story is strong, but never delves into explicit intimacy. The romance happens a little too quickly for some tastes, and with a real life couple I would recommend they take a little time to get acquainted under more normal terms.

Keddington writes almost poetically of both the California coast and the red rocks of Utah. Her descriptions bring the background to life. The suspenseful portions of the story are so gripping it’s nearly impossible to set the book down while reading those chapters. She understands and utilizes dialog well. The middle sags a bit with too much emphasis on family history stories that really have little to do with the plot but serve as filler. Suspense fans may be disappointed in so much epilog after the story actually ends, but romance fans will love it and find it a wonderfully appropriate Valentine’s Day read.

Dorothy Keddington is the author of the immensely loved books, Jayhawk and Return to Red Castle, along with six other novels. She coauthored A Square Sky with Sayed Ahmad Sharifi, which is a gripping mideast meets west true story. She also wrote two musical plays. She is a professional genealogist who specializes in Irish and U.S. family history.

Where can I find this in an e-book?