On Faith: What U.S. Presidents really believe About God

From the Washington Post blog, On Faith, Historian Michael Beschloss explores the differences between what presidents say about religion and what they actually believe.

“In 1956, former President Harry Truman was asked by a priest in Rome what St. Francis had done for him. “Nothing,” Truman jocularly replied, “but give me a sore throat and a stomach ache in his town of San Francisco.”

Truman’s response to the priest is provocative because it is the reverse of what you would expect a president to say. In general and throughout American history, presidents-for the most self-protective reasons-not only avoid comments that might offend a vote of faith as sacrilegious, but also tend to exaggerate the depth of their personal religious conviction and practice. Richard Nixon, for instance, kept Reverend Billy Graham close at hand and started regular, well-publicized prayer services at the White House-even though, as the later record demonstrates, faith does not seem to have loomed large in his approach to presidential leadership.

Truman’s comment to the priest suggests that he was one of the rare past presidents whose seeming public nonchalance about religion concealed a deeper, more complex and more interesting reality: he was more of a Christian than people realized. The ignorance of Truman’s peers about his private beliefs is not astounding because, in my experience, two facets of a president’s private life that are among the most difficult to discern-either at the time or in history-are marriage and religion. 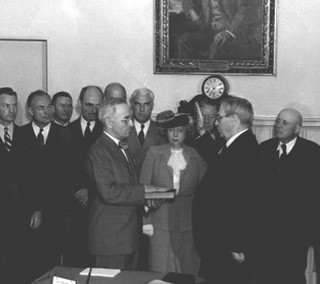 As I have written elsewhere, Truman was brought up to know the Scriptures, some verbatim, and felt that “every problem in the world would be solved if only men would follow the Beatitudes.” (He had a favorite verse among the Psalms, which was, “By the rivers of Babylon, there we sat down, yea, we wept, when we remembered Zion.”) Although his beloved wife Bess was an Episcopalian, he felt strongly enough about being a Baptist that he stayed one, convinced that it provided the common person the shortest route to God.”

Abraham Lincoln once said he could not comprehend how a president could survive giving such orders without being driven to his knees. To find out how other presidents felt about religion and to read the full article on the Washington Post On Faith blog, click here.