Mormonism in Pictures: The Gilbert Arizona Temple, House of the Lord | Meridian Magazine

Mormonism in Pictures: The Gilbert Arizona Temple, House of the Lord

The Gilbert Arizona Temple open house is now in its third week. To date, tens of thousands of people from many faiths and walks of life have taken advantage of the public tours that continue to generate positive experiences. 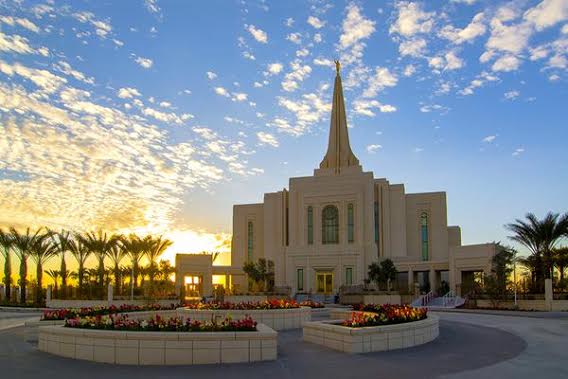 The Gilbert Arizona Temple of The Church of Jesus Christ of Latter-day Saints will be formally dedicated Sunday, 2 March 2014. Church President Thomas S. Monson announced the temple on 28 April 2008, and ground was broken 13 November 2010. The Gilbert Arizona Temple will be the 142nd operating throughout the world. The public is invited to tour the temple during an open house from 18 January through 15 February 2014. 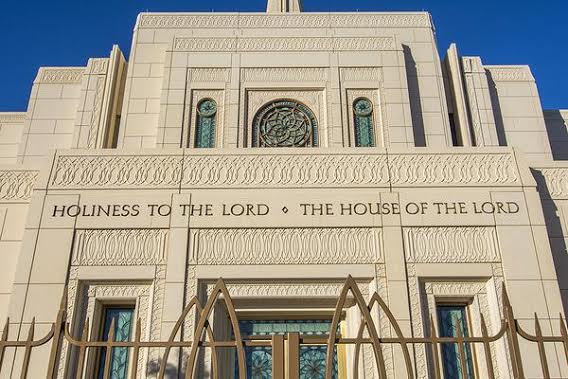 Faithful Mormons consider temples to be the most sacred places of worship on earth. Church members strive to follow Jesus Christ, and the temple provides a place where they make solemn commitments to God. The inscription above the entry of every temple proclaims “Holiness to the Lord – House of the Lord.” 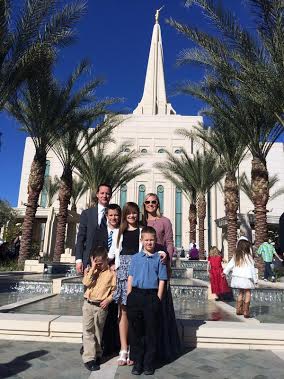 Temples differ from the thousands of local meetinghouses where visitors are welcome for Sunday worship services and various weekday activities. Temples are reserved for Church members to perform sacred ordinances (religious ceremonies) such as marriages that unite families forever and baptisms on behalf of deceased ancestors. 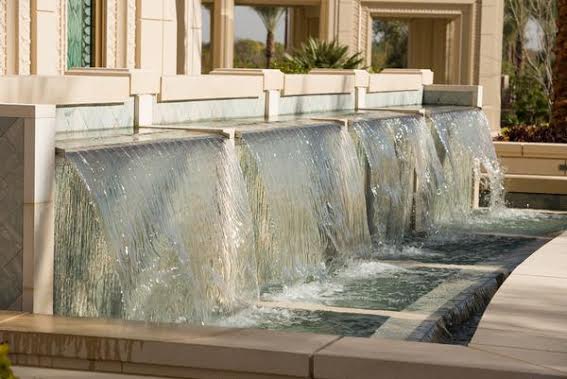 Church architects often include recirculated water dcor in the temple plans. This waterfall at the Gilbert Arizona Temple is part of a water feature that adds to the beauty and peace of the sacred setting. It starts near the south side of the temple in a small waterfall, and flows into shallow and stepped horizontal pools flowing away from the temple between palm trees. 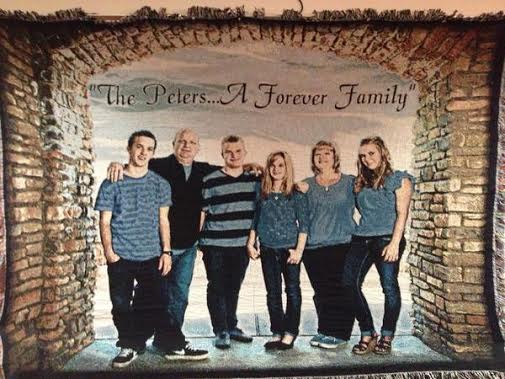 The promise of an eternal family provides hope and comfort to the Mike and Susie Peters family of Gilbert, Arizona after losing their son, Matthew (the boy in the middle with the striped shirt), who was stricken with leukemia. In 2013 he passed away at the age of 17. Local Gilbert television station ABC 15 interviewed the Peters family to get its perspective on temples in a news story entitled “What Temples Mean to Mormons.” 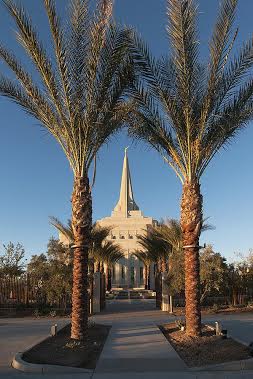 Each temple of the Church includes landscaping native to the area in which the temple is located. At the Gilbert Arizona Temple, 84 mature palm trees, shrubs, flowers and other greenery surround the temple to enhance the structure’s beauty. 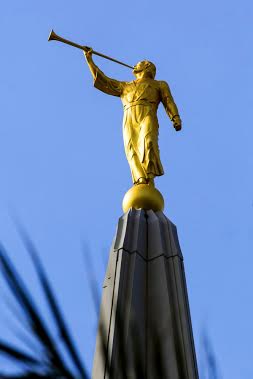 A statue of Moroni adorns the top of most temples. Moroni is not a figure of worship, but an ancient prophet in the Book of Mormon. It was the angel Moroni who guided young Joseph Smith in 1823 to the location of golden plates from which the sacred book of scripture was translated. Moroni is a key figure in the Restoration of the gospel prior to the second coming of Jesus Christ foretold in the Bible. Read more about how the angel Moroni statue is placed on a temple in this 2011 blog post, “Angel Moroni Statues Atop Mormon Temples Are More Than Decoration.” 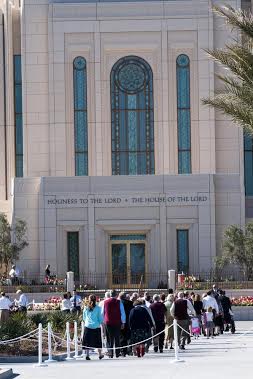 People from many walks of life line up to tour the temple and hear an explanation about how the temple functions and why temples are important to Latter-day Saints. The four-week open house is expected to draw several hundred thousand people from across Arizona and other areas of the world. 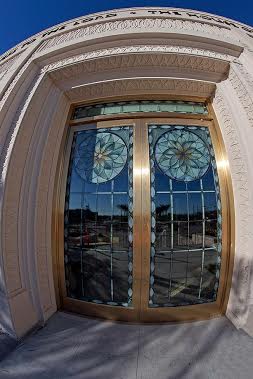 Windows and doors on the Gilbert Arizona Temple carry an artistic theme that features agave, a plant that is native to the deserts of the Southwest, in a color scheme of blue, green and earth tones. Inside the temple, architects used various types of wood including eucalyptus, white oak and painted hardwoods. This photo was taken with a different lens to render this special effect.

This pergola, one of two that are about 50 feet from the Gilbert Arizona Temple, is one of the landscaping designs providing people with a place to sit, ponder and enjoy the peaceful beauty of the temple. 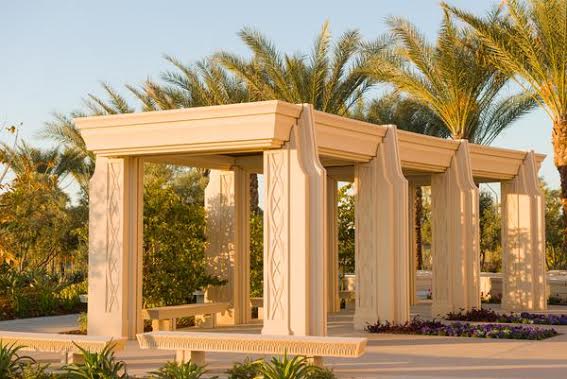 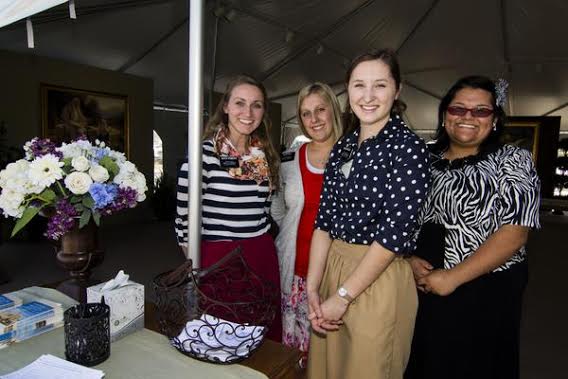 Sister missionaries from the Arizona Gilbert Mission of the Church greet open house visitors during the temple tour. Volunteers can be seen at most temple open houses and are willing to answer visitors’ questions. 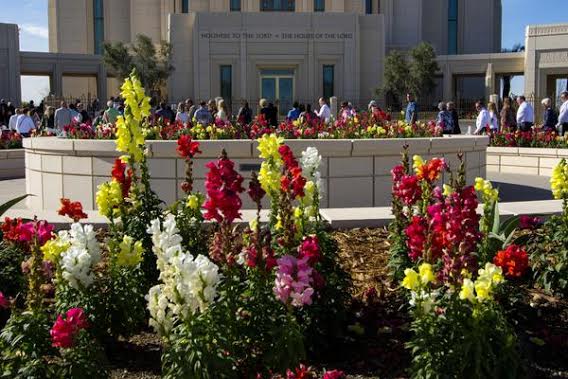 Beautiful native flowers provide a pleasant view for people waiting their turn to tour the temple. Thousands of flowers, shrubbery, palm trees and other garden accessories are planted and constructed throughout the Gilbert Arizona Temple property. 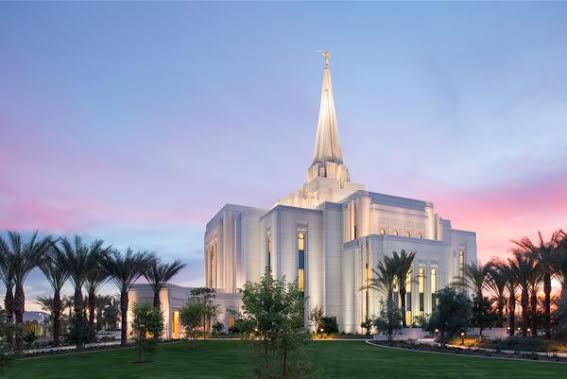 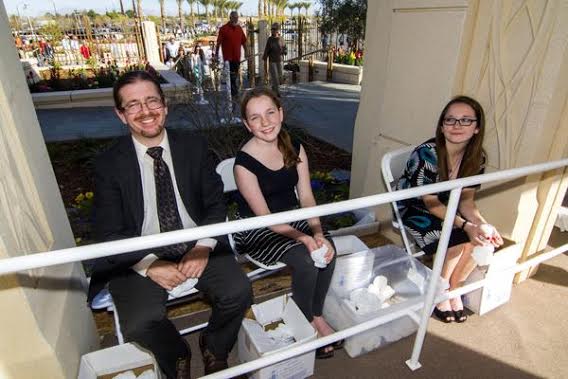 Members of the Church have an opportunity to serve during the open house. Latter-day Saints help place shoe coverings over the shoes of the visitors before they enter the temple. The shoe coverings are to protect the temple carpeting and floors and have no religious significance. 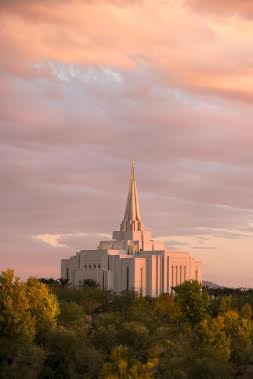 At 85,000 square feet, the Gilbert Arizona Temple is the largest temple the Church has constructed in 17 years. The exterior is light cream-colored precast concrete with white quartz. Colors and motif of temples are designed to coordinate with the area in which the temples are located. 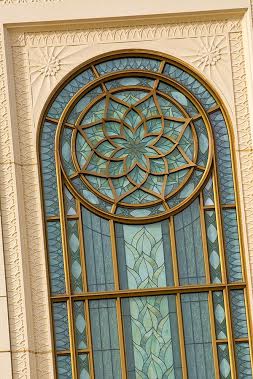 Art glass windows on the Gilbert Arizona Temple include a representation of the agave plant and flower. 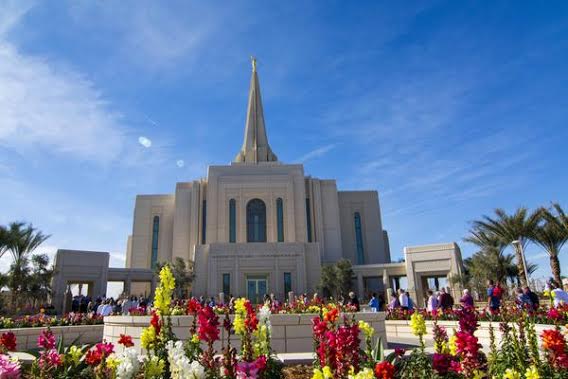 The Church invites neighbors; friends; government, community and clergy leaders; news media and people of all faiths to tour its temples before they’re dedicated. During the Gilbert Arizona Temple open house, Arizona Governor Jan Brewer visited the temple and said, “This temple is a beacon of hope, faith and love to all those who come to this sacred building and its beautiful grounds.” Rabbi Jeremy Schneider, spiritual leader of Temple Kol Ami in Scottsdale remarked after touring the temple, “I believe in Judaism. But I think we can all learn from our Mormon neighbors and many other worldviews. Wisdom is the ability to learn from all humans and points of view. Such open-mindedness can only make our religion and our faith stronger.” 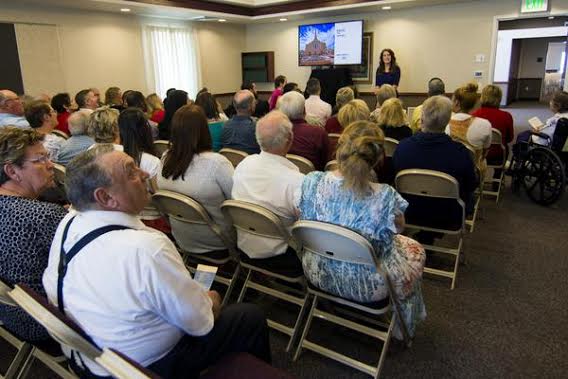 Prior to an open house tour, visitors watch a short presentation on why Mormons build temples and a video showing the interior of the sacred structure. Questions from visitors are encouraged. 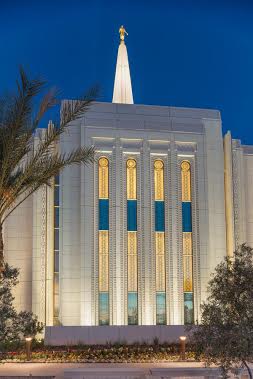 As dusk arrives, lights inside and outside the Gilbert Arizona Temple begin to come on. The art glass windows brighten and cast a lovely glow. 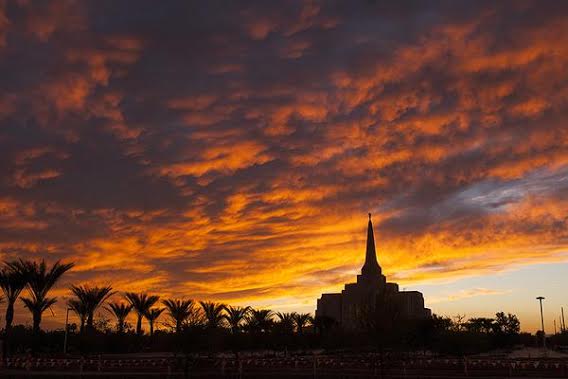 The Gilbert Arizona Temple stands majestically in the shadow of a awe-inspiring Arizona sunset. 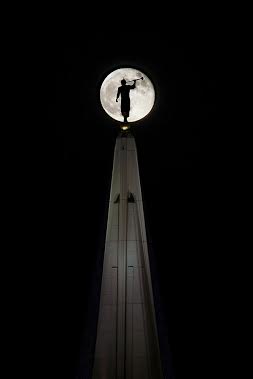 The angel Moroni, placed on top of most temples of the Church, is silhouetted against the Arizona moon. This statue is 195 feet above the ground, is 16 1/2 feet tall and was placed atop the Gilbert Arizona Temple 15 May 2012.

Hi, Is www.latterdaysaintmag.com ranked at the top of Google for Architect? TeamLocalSearch.com can help increase your local search rankings for Architect with our Local SEO Bundle Package. For a limited time we are bundling together our top 3 services to help take your local website to the next level! This bundle package includes 3 components normally offered separate: Get a complete and comprehensive local SEO audit AND our team will submit your business to 30 top local citations websites AND our team will submit your website to 150 web directories! The TEAM behind TeamLocalSearch.com have worked on Search Engine Optimization for HUNDREDS of clients including Sony, Orbitz, Cheap Tickets, Campmor, Growing Tree Toys, Steve Spangler Science, and many more. Our Local SEO Audit includes over 300 checks within 6 sections including: 1. Local Directory Listing Audit Find out where your business is listed and what they say about you. 2. Google+ Local Report Analyze your Google+ Local listing and see how you compare to your top 5 local competitors. 3. Detailed on-site SEO Audit Identify the SEO problems which are holding your website back 4. Local Search Engine Ranking Report Are you ranking on the 1st page of Google for your most valuable search terms? 5. Off-Site SEO Analysis How do search engines see your site & how does it compare to your top competitors? 6. Social Media Report Are you making the most of the social media revolution? <-------- Local SEO Bundle Package -------> To recap- This is what is included with our Local SEO Bundle Package : 1) A 300 point comprehensive Local SEO Audit custom to your website 2) Our team will submit your business to 30 local website directories/citations 3) Our team will submit your website to 150 global website directories This special bundle package wont last long! Normally priced at $299.99 you can get our comprehensive local SEO audit PLUS get your business submitted to 30 local citation websites PLUS get your website submitted to 150 web directories all for just $119.99 today! Signup today and we'll complete this audit for you within 1 week. AND WE HAVE A SPECIAL BONUS OFFER AS WELL THAT ENDS SOON! Get pricing options and learn more at the link below: https://www.teamlocalsearch.com/product/local-seo-bundle-package-audit-plus-

As my NM friend said: The Temple is absolutely exquisite.