As You Are extends the scope of the Regency Romance 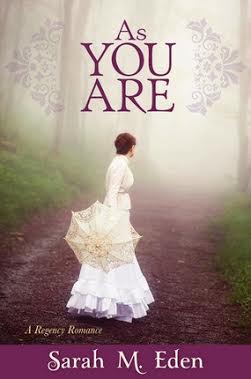 Corbin Jonquil feels like a misfit in his family. With six talented, some titled, brothers who seem to have no trouble speaking eloquently, he is the only brother who stutters, stammers, and under pressure can’t speak a word. His horses don’t mind and he has established a successful horse farm, so all is well until he meets a lovely widow with two children whom he would like to impress. His brothers give him advice for impressing the lady, but his attempts end in disaster. So Sarah M. Eden sets the stage for As You Are, a delightful Regency Romance with a solid touch of suspense and another volume in her popular Jonquil Brothers series. Each book in this series stands alone.

It turns out the widow, Clara Bentford, and her children are abuse victims of both her deceased husband and his unscrupulous brother who is trying to steal her small portion. She is in hiding, knowing he is looking for her and that if he finds her both she and her little ones will be severely beaten, her son deprived of the means to attend school as he gets older, and her two-year-old daughter will have no future. Adding to her troubles is a neighborhood dandy who attempts to force his attentions on her. She arranges to rent a cottage that borders on Corbin’s horse farm and she sits in the pew in front of him during church services. The children soon form a strong friendship with him, but it takes several frightening incidents before he realizes she isn’t indifferent to him because of his inability to speak, but has reason to distrust men and is terrified of her brother-in-law.

Sarah Eden has a knack for just the right pacing in her books. As in her previous books, the action moves along comfortably, supplying background as it goes without unloading info dumps on the reader while endearing the characters to us, and at the same time introducing the crisis the characters face. She gradually shifts the action to greater intensity, resolves some of the lesser problems, then provides a smashing, satisfying ending.

Regency Romances are strong on manners, social position, and the conventions of the regency period in England, but Eden takes hers a step further in showcasing a more universal human dilemma faced by Corbin and Clara. In this story, the main characters make discoveries concerning who they are outside of the narrow strictures of their society. They learn the value of their own strengths and that what works for one person isn’t necessarily the best course for another.

Both Corbin and Clara are well developed as characters and both grow and gain greater insight as the story progresses, but my favorite characters are the children. Obviously the author is familiar with the various motivations , misconceptions, repetitions, and dialog of small children. Little Alice is particularly a delight.

Sarah M. Eden is a favorite of Regency readers, particularly those who enjoy a little more depth than is usual in this genre and a touch of humor. She is an award winning author. She and her family make their home in Utah.

AS YOU ARE by Sarah M. Eden, published by Covenant Communications, 193 pages, soft cover, $15.99 Also available on CD and for e-readers.

Lovely!! I look forward to reading this. Thank you!! :)