Arizona Governor Jan Brewer toured the new Gilbert Arizona Temple of The Church of Jesus Christ of Latter-day Saints with legislators, local government and religious leaders, and educators. She visited the temple during an open house and luncheon with Elder William R. Walker of the Seventy. Also attending the event was Elder David E. Lesueur who will be the temple president, Elder Todd B. Hansen, and Elder Jim L. Wright of the Seventy. 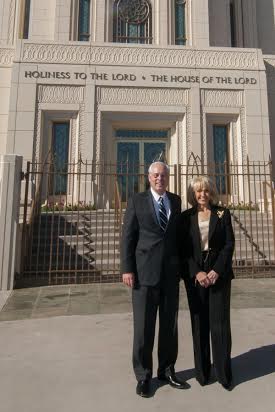 Elder Walker takes Governor Brewer on a tour of the Gilbert Arizona Temple. (Photo courtesy of John Power) “This temple is a beacon of hope, faith and love to all those who come to this sacred building and its beautiful grounds,” said Governor Brewer. “It is a special place, a place of spiritual refuge in this troubled world.”

Governor Brewer talked of the Saints who came to Arizona more than 100 years ago. “With faith, fortitude and devotion to God, Mormon pioneers settled much of this state, including what would become the town of Gilbert,” she said.

This is the fourth temple the Church will have in Arizona, with others located in Mesa, Snowflake, and Gila Valley. Governor Brewer said she’s looking forward to the completion of the Phoenix Temple this fall that will be in her “backyard.” A sixth Arizona temple has been announced in Tucson.

There are currently more than 400-thousand Latter-day Saints now living in Arizona. “What a remarkable legacy,” she added. “I am proud to call you my neighbors and my friends.”

The Gilbert Arizona Temple is open for free public tours through Saturday, 15 February 2014, except Sundays. Open house reservations can be made atwww.gilbertmormontemple.org. The temple will be formally dedicated on Sunday, 2 March 2014, making it the 142nd operating temple of the Church worldwide.