The Mormon Tabernacle Choir and Orchestra at Temple Square welcomed American soprano Deborah Voigt and British actor John Rhys-Davies for their annual Christmas concerts this past weekend in the Conference Center in Salt Lake City. 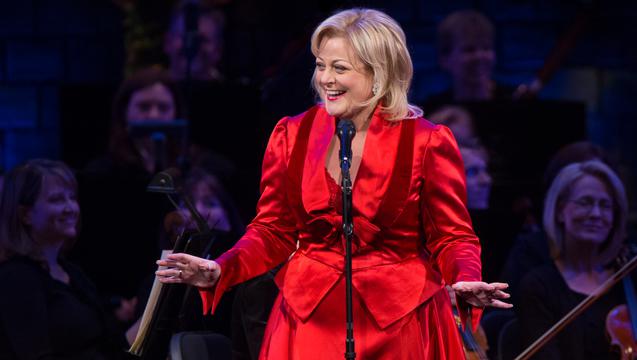 Renowned soprano Deborah Voigt brings humor to the performance with a rendition of “The Twelve Days After Christmas.”

The guest artists also joined the choir and orchestra for the weekly Music and the Spoken Word broadcast and a mini-concert on Sunday, 15 December. About 700 cast and crew are involved in the annual production, including dancers and the Bells on Temple Square.

This is the first time Voigt and Rhys-Davies have made appearances with the choir. “These are two such great additions for all that is happening on stage,” says Ronald B. Jarrett, president of the Mormon Tabernacle Choir, who spoke during a news conference Friday at the Conference Center, which seats 21,000 people.

Rhys-Davies, an acclaimed British actor and voice artist, is best known to film audiences for his role as Sallah in Raiders of the Lost Ark and Indiana Jones and the Last Crusade and more recently as Gimli in The Lord of the Rings trilogy.

“It has been an absolute thrill to be here,” says Voigt, a leading dramatic soprano revered for her performances in the operas of Richard Wagner and Richard Strauss. The Chicago native raised in California has also portrayed heroines of Italian opera to great acclaim.

“I have been a fan of the Mormon Tabernacle Choir for a long time because I myself grew up in a church environment in the choir, where you will find a lot of opera singers have their first opportunity to sing,” explains Voigt. “I have been blessed to sing in a lot of venues, but this was something really unique. The first time I walked in here and saw the vastness of this center, I couldn’t believe it. It feels much more intimate once it’s full of people.” 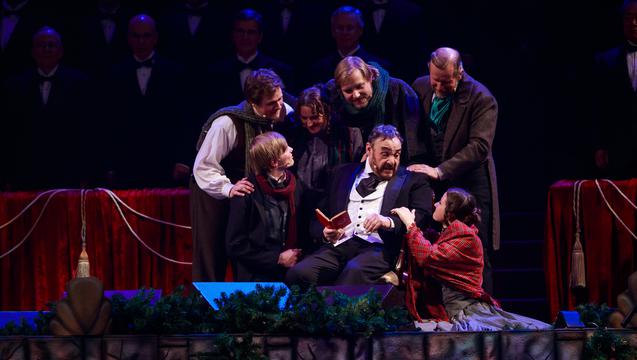 Rhys-Davies took to the air with wires during the Conference Center performance, which he describes as “great fun.” A former pilot, he explains that he’s not bothered by heights. “If I fall from that height, it will put an awful dent in the floor,” he laughs.

Voigt brought humor to the performance with a rendition of “The Twelve Days After Christmas,” which was included on a suggested list of songs shared with Mack Wilberg, music director of the Mormon Tabernacle Choir. “It’s nice to have a chance for a little laughter,” she says.

“We have been very honored and thrilled to have great artists of this stature this weekend,” says Wilberg, who explains putting together the annual Christmas program is a long process that takes months to plan. “I do a lot of thinking and a lot of research,” he remarks. Choir members put in nine extra rehearsals and do the entire concert by memory, and the orchestra puts in an extra rehearsal.  “It’s a challenge because people will say, I don’t know how you’re going to top what you just did.’ We’re thinking about it all of the time.”

“I really feel very blessed to be here, especially this time of year,” says Voigt. “It all came together in a miraculous way.”

“It is a marvelous, matchless, memorable experience,” adds Rhys-Davies. “We’re really grateful, both of us,” he says, praising the hospitality they have received during their visit. Rhys-Davies describes Salt Lake City as a “beautiful city” and “remarkable community” with many people who have “good manners and natural kindness.” “You people have it in abundance. It comes so naturally for you.”