The Danger of Disaster-Vision | Meridian Magazine

I come from a very large family. We’re not all together in one place very often, so we treasure the few pictures we have that include all the siblings. One in particular shows all eleven children sitting in age-order on a dock with the sun low and golden on our smiling faces. The picture is wildly out of date now and last time we tried to recreate it, we nearly flipped the dock from all the extra weight of in-laws and children and age-onset adulthood. We love the new attempts at the dock picture,’ but nothing will ever be as treasured as that first picture. 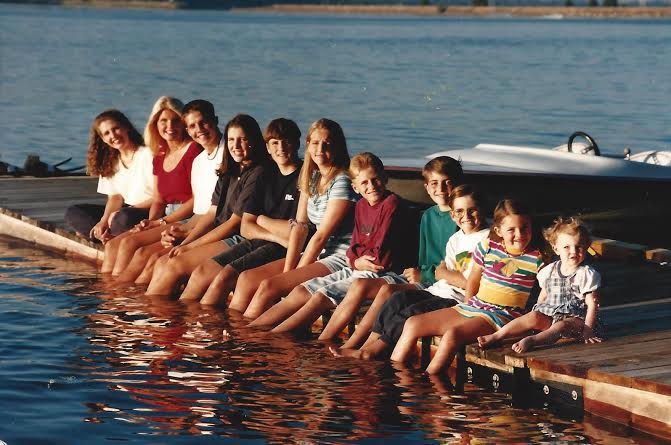 I’m sitting second to the right next to my baby sister Michaela. I look so happy in this picture, though all I remember feeling when we took this picture was dread that the baby was going to fall into the deep water in front of us. I don’t remember anything else that I actually saw that day, but I remember vividly the disaster-vision I had of what would happen if baby and water did meet. (If you want the truth, I was probably more afraid of her inability to stave off lake monsters than her inability to swim).

Recently I found a file of old pictures from various stages of our family. I was zipping through them making copies of the ones I’d never seen before. My eyes passed over the dock picture without a second thought, then something caught my eye and I rolled back. 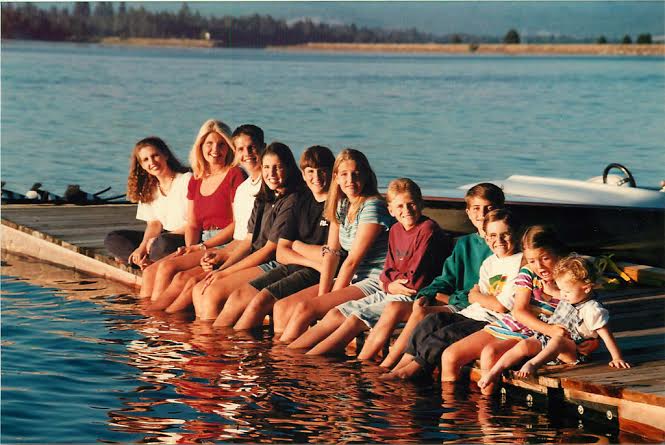 It turns out this was not THE dock picture, but another picture from the same roll that was our own little factory reject. You may not immediately see the difference between the two photos, but once you figure it out, you’ll be able to look at little else. Here all these years I thought the protectiveness I had for Michaela that day was just inside my heart. I guess when baby wants to dip her toes in the water like everyone else, you can’t help but reveal the fear that’s revving up inside you (though no one else really seemed to notice).

The expression of horror on my face is downright comical and rivals something Edvard Munch could come up with to capture an inaudible scream. Unfortunately, it is less comical when I realize that I still have disaster-vision and that that face takes inopportune moments to define my life. Rather than having the practical use of keeping a child from a dangerous situation, it comes out at times when I’d do much better to have glorious-success-vision.

Realized a truth, yet still at a loss to apply it. It isn’t just a matter of being an optimist vs. being a cynic. It is a matter of putting the kind of positive energy into things that will favor an optimistic outcome rather than confirm what the cynic always predicted. It’s about cultivating that positive energy even if the observable patterns in your life have taught you that this too shall fail. Maybe it’s even about rethinking the way you interpret your life’s patterns and stop thinking of things as failures start knowing that things just don’t turn out until they do.

I think my disaster-vision has evolved over the years. I’ve allowed myself to be a little more carefree about adventurous activities like sitting on a dock, fully clothed with tons of people around watching out for you… And even developed a tenacity when it comes to accomplishing seemingly impossible things. The one area where the disaster-vision remains stubbornly affixed is in my relationships with other people.

I can’t speak for men, but after living with twenty-one different women over the last five years (can that be true? That’s insane.), I’ve observed that women have the tendency to assume if a relationship goes south, there is probably something wrong with them. Sure, they’ll come home after a break-up or unfortunate run-in and say boys are dumb,’ but catch them a little further along in their rope and you’ll find that some part of them thinks it’s because they are not pretty enough or fun enough or special enough.

The same can apply to any kind of relationship; romantic, familial, professional or otherwise. I think we (not just women, but people in general) have some deep-seated tendency to believe that we are not good enough. Even people that seem to communicate that they are just TOO good are usually the ones that feel the most inadequate.

That insecurity prevents people from feeling comfortable enough to be vulnerable or “put themselves out there” because they see deep water and feel sure that they only possible outcome is drowning in it. (Speaking to my own knee-jerk reaction to putting myself out there, one of those pill bugs that shrinks inside itself and rolls away when you get near it comes to mind).

But I’m slowly discovering that indulging those insecurities and shrinking from people out of fear that you’re not what they think or you’re not good enough, is pure selfishness. Maybe disaster-vision in general is a particularly insidious variety of selfishness. In its distilled form, it is caring about what will happen to you more than you care about influencing the world around you for good; worrying about yourself rather than believing in people and things.

Fear is in opposition to faith and though I would once have said faith in God and faith in relationships or faith in people are totally different, I think they are irrevocably connected. Letting your perfect brightness of hope’ extend to the people and situations around you and invoking God’s assistance in cultivating glorious-success vision will teach you to see all that deep water for what it really is—a beautiful lake and endless possibility.

I really enjoyed this article. I believe it is one of the best so far.