Discover the Heart of the World in IMAX | Meridian Magazine

Discover the Heart of the World in IMAX

I pushed the doors open, assuming I’d be late (I always get lost going to Thanksgiving Point even though from the freeway it looks like it’s just right there). But instead of an abandoned lobby, I was met with a long line of twenty-somethings. The line wrapped around columns and weaved through the dinosaur skeletons reminding us that we were still the museum of ancient life. Not many of the patrons seemed to notice the behemoths of a time long gone standing over them, they were there in appreciation of another ancient thing—JERUSALEM.

Directed by Daniel Ferguson, Jerusalem is an awe-inspiring journey into the heart of one of the “oldest and most enigmatic cities.” Seeing it on the scale of an IMAX screen (and in 3D) is the nearest thing I’ve ever experienced to actually being there, without actually being there. The story of the old city is told through the lens of three young girls that currently live there, each representing a different religious community that share such tight quarters tucked in among the holiest sites in Christianity, Judaism, and Islam.

Our three storytellers were selected after hundreds of the city’s occupants were interviewed. Though each was selected for her unique family background and perspective, they all three happen to look very similar. Each expressed her feelings for the city with unique passion, but in a city rife with conflict and strife, it was striking that the figureheads of each community were ultimately so similar. It seemed to communicate how much these people would find they have in common, if they would engage with the people that share the streets with them.

The director of photography for the film, Reed Smoot has filmed in Jerusalem before and said that when this offer came up, he jumped at the chance to be a part of the project. He commented that this city is a place that “draws you back in.” He spoke the words to a theatre full of people who knew exactly what he meant.

A former student of The Jerusalem Center for Near-Eastern Studies (affiliated with BYU) heard that this film might be coming to this area and rented out an entire theatre at Thanksgiving Point for a gathering of Jerusalem Center students from all different semesters to be able to experience the city again together. Clearly many feel the magnetism that Smoot referred to, of a city that “draws you back in” because so many hundreds of people bought tickets that they had to rent out a second, private screening of the film.

The group consisted of students newly home from Jerusalem (still proudly wearing their scarves and genie pants) and those that have been home for many years like myself and the other amazing people that accompanied me in the summer of 2009. It was strange, as we waited to enter the theatre, to overhear bits of conversation. I heard people spiritedly reminiscing about memories that I have to, I’d turn, expecting to see a familiar face, and see only a crowd of unknown eyes and smiles. Peculiar to have shared memories with strangers. 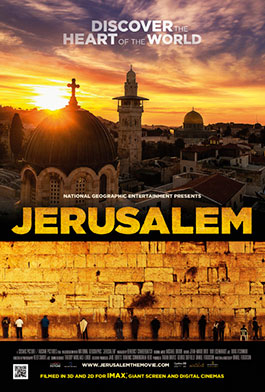 Our coming out in droves attracted the attention of the production, which is why we had the privilege of hearing from the director of photography on the experience of making this film. He told us behind the scenes details and stories that greatly enhanced the film for us. He said that though he brought his primary film crew over from North America, the rest were locals. Some were Jews and some were Palestinians and Arabs. Because of this, certain crewmembers weren’t allowed to go some of the places they were filming. Smoot said it was quite an experience “switching crews, sometimes on a daily basis.”

One of the sequences in the film that brought audible gasps from the experienced audience was the journey inside the Dome of the Rock. For those of you unfamiliar with the city, you must know that the gold-domed building that has become Jerusalem’s Eiffel Tower in terms of visually representing the city, is nigh unto impossible to enter.

I believe one presumptuous boy in my group got close enough to peek through the cracks, but that was the same boy who thanked the Pontifical Swiss Guard for protecting us from the Pope. I wouldn’t exactly say he represented the standard Jerusalem experience. The Dome of the Rock is maintained by a group out of the kingdom of Jordan so the royalty of Jordan had to scrutinize the script of the film and ensure that there was no slant in its portrayal of this hotly contested spot of ground. Smoot said that permission came through just one day before filming for that sequence was to take place.

Seeing Jerusalem in 3D was really a stunning and striking experience. Short of going there personally, this “high-fidelity imagery” seems the only way to view the richness of this incredible city. Reed Smoot told us that this multi-dimensional format seemed the perfect way to attempt to capture a city that is so layered with the influence of different cultures and religions. It was the perfect way to capture a city where “every stone, every rock, every alleyway represents some kind of belief.”

To find where Jerusalem is playing near you, click here.

Please learn the difference between peak and peek. Also when to put an apostrophe in "its." The apostrophe means "it is."