The large, white envelope now displayed on the mantelpiece in the crowded family room of the Wright home looks ordinary enough, like any other piece of mail. But there’s good reason for the crowd and the excitement its arrival has caused: this envelope contains the location where its addressee, Sister Allison Wright, will spend 18 months of her life teaching others about God and Jesus Christ.

“It just depends on where the Lord needs me,” says Alli, as she’s been called since around age four. “It will definitely take faith, but I’m excited to see where I get called. I can’t wait.”

Just a year ago, Alli was an 18-year-old senior at a Utah high school, busy with activities like cross country, choir and student government. She’d thought about serving a mission for her church, The Church of Jesus Christ of Latter-day Saints, but it was a decision she planned to make in a few years, once she neared the eligibility age of 21 for female missionaries. In October 2012, she was sitting in that same family room when all that changed.

During the first session of the Church’s semiannual general conference, she watched in amazement as Church President Thomas S. Monson announced that young men could now serve missions at age 18 instead of 19 and “young women who have the desire to serve may be recommended for missionary service beginning at age 19, instead of age 21.”

“Everything, all of my plans for the next five or so years, just changed completely in that one second,” Alli said. “When the opportunity came, it just hit me: I’m going to go. So yeah, that was a very powerful experience.”

At a press conference that October day, Elder Jeffrey R. Holland of the Quorum of the Twelve Apostles explained that while it is not an obligation for young Latter-day Saint women to serve missions, “those who do serve are stunningly successful, and we enthusiastically welcome your service.” He said, “Personally, I am absolutely delighted if this change in policy allows many, many more young women to serve.”

That is just what has occurred. Since President Monson’s announcement, the number of female missionaries has more than doubled, rising from about 8,000 in September 2012 to over 19,000 now. 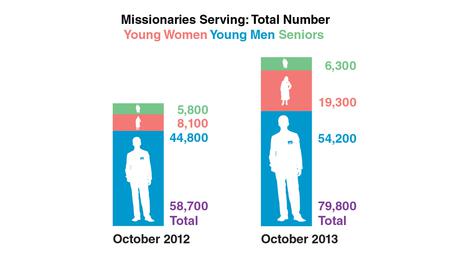 “The young sisters of this Church have listened to what President Monson had to say [when he announced the missionary age change]; he made it very clear that their missionary service, although not an obligation, is welcomed by the Church,” Elder Evans said. “With that wonderful comment from President Monson, what we see is the young women of this Church looking at missionary service as a viable option for which they can now plan.”

Lower Age Requirements and a New Wave of Missionaries

The change in mission eligibility ages has impacted the lives of Mormon youth around the world, both male and female. The number of missionaries serving has swelled to nearly 80,000 as young men and women have taken advantage of the opportunity to serve missions earlier. In Alli’s Sandy, Utah, high school, it affected a large percentage of her graduating class.

“After that announcement went out, you could feel a difference,” Alli said. “People were getting ready; people are excited. I can’t wait to be a part of it. I think it’s so amazing.”

As more missionaries have chosen to serve, the leadership structure of Church missions has evolved to accommodate the larger numbers. 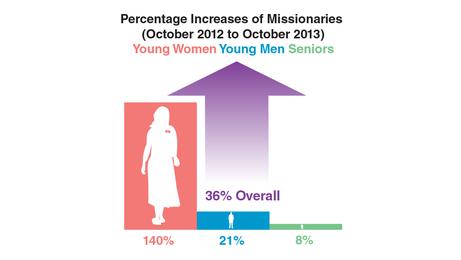 The members of the mission leadership council “meet together monthly and counsel together about the needs of the mission,” described Elder Evans. “They discuss problems, and we are observing, just as in every other level of the Church, that when men and women of faith counsel together, there is a much better result than when we do it any other way.”

Preparing to Serve a Mission

Though Alli’s decision to serve a mission was nearly instant, the preparation for her mission has spanned years of building knowledge and faith and months spent completing the official process. Church members volunteer to serve missions, but they must be recommended to do so by their local Church leaders and then receive an official “call.” Members who would like to serve missions must complete several steps:

1)      Participate in an initial interview with their local bishop, the leader of a congregation, to discuss spiritual, emotional, physical and financial preparation.

2)      Explain their readiness for missionary service via a set of online forms, which include questions about an applicant’s desire and preparation to serve a mission, language skills, work experience, education, leadership experience and health.

3)      Undergo an assessment by both a doctor and a dentist to confirm that they are physically prepared to serve.

4)      Meet with the bishop and the stake president (leader of a group of congregations similar to a Catholic diocese) and receive both of their recommendations to serve.

Alli’s stake president, Brett Davies, said that as he advises potential missionaries, he helps to ensure all the steps are complete, but more importantly, he asks for God’s help in the process. “We follow the Spirit to allow us to be guided on the questions that we ask and to make sure that it’s the right thing for them to go,” he said.

If the potential missionary, bishop and stake president feel comfortable moving forward, the stake president submits the recommendation forms to the Church’s Missionary Department in Salt Lake City. The forms are screened by several different personnel, who make note of any issues that would affect the location of the missionary’s assignment, such as visa requirements or mental and physical health challenges.

Each week, after the forms have been reviewed, Missionary Department employees divide the submitted materials into groups of several hundred. A staff member reviews the materials for each missionary in the group. Near the end of the week, that staff member will then display the materials for each potential missionary in an assignment meeting with a member of the Quorum of the Twelve Apostles. The information is presented on a screen for the apostle, who seeks divine guidance as he assigns each missionary to one of the 405 Church missions across the world. The mission assignment is then approved by the president of the Church, who extends the written mission call letter.

In 2010, Elder Ronald A. Rasband, a member of the Church’s Presidency of the Seventy, spoke about observing First Presidency member President Henry B. Eyring, then a member of the Quorum of the Twelve Apostles, as he determined mission assignments:

“As the process began, a picture of the missionary to be assigned would come up on one of the computer screens. As each picture appeared, to me it was as if the missionary were in the room with us. Elder Eyring would then greet the missionary with his kind and endearing voice: Good morning, Elder Reier or Sister Yang. How are you today?’

“He told me that in his own mind he liked to think of where the missionaries would conclude their mission. This would aid him to know where they were to be assigned. Elder Eyring would then study the comments from the bishops and stake presidents, medical notes, and other issues relating to each missionary.

“He then referred to another screen which displayed areas and missions across the world. Finally, as he was prompted by the Spirit, he would assign the missionary to his or her field of labor.

“From others of the Twelve, I have learned that this general method is typical each week as Apostles of the Lord assign scores of missionaries to serve throughout the world.” 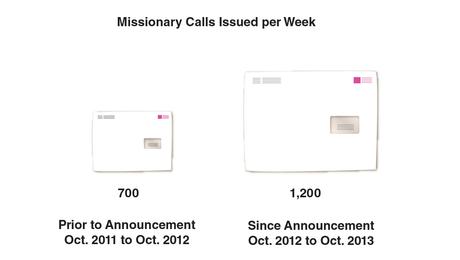 Elder Evans noted that though the number of missionaries serving has changed since 2012, the apostles and Missionary Department staff have worked to ensure the mission call process is the same.

“[Members of] the Quorum of the Twelve Apostles still make every single missionary call,” he said. The apostles and Missionary Department have increased the number of assignment meetings held per week to accommodate the increased number of calls issued.

Church members believe that any individual can receive guidance from God, in a manner as modest as a strong feeling or thought – a simple, brief moment of insight. Leaders are called to seek divine guidance for those they lead. Alli said that because she believes the Lord can guide anyone and that He does guide the apostles of the Church, she is confident that she will be called to a mission that is right for her.

“I think you definitely go exactly where you need to, and that has never been hard for me to accept,” Alli said. “I know the decision doesn’t just come from them, that there’s a plan for it.”

Alli will rely on that belief in a greater plan as she seeks to teach others about the Church and the Savior.

“This is true,” she said. “Even when it’s hard, even when I don’t understand something, even when I have doubts, I know that this gospel makes me happy; it makes me feel peace.”

Ultimately, that’s the reason Alli wants to spend 18 months talking to strangers about the gospel of Jesus Christ.

“It brings so much joy and happiness into my life, and I want to share that with others,” she said.  “And I feel like the Savior has done so much for me, the least I could do is give a year and a half of my life to Him.”

The crowd in the Wright family room is now complete; loved ones who couldn’t be there physically have joined via video or phone call. Without further ado, Alli excitedly opens the envelope and reads:

“Dear Sister Wright: You are hereby called to serve as a missionary of The Church of Jesus Christ of Latter-day Saints. You are assigned to labor in the Denmark Copenhagen Mission.”

The room erupts in enthusiastic clapping and cheering, and Alli grins as she hugs her parents standing at her side. She maintains her grin as she reads the rest of the letter, detailing when and where her training for missionary service will begin. After she finishes, she shares delighted hugs and exclamations with her crowd of well-wishers.

“A mission is a wonderful experience,” says Russ. “I did it, and she’ll be the fifth of our kids to do it, and I just couldn’t be happier. It’s terrific.”

Earlier that day, Russ helped Alli, the youngest child by about five years, move out of their home and into her college dorm.

“That was a little overwhelming, to move her out and to get the call today,” he acknowledges. “A lot of high emotions today, but it’s great.”

After the crowd has thinned, Alli takes a moment to reflect on what she’ll represent when she’s a missionary.

“As members of the Church, we say that we take upon ourselves the name of Christ, and as a missionary, you do it literally – you have a name badge that has His name upon it,” she says.

“Thinking about it in that way, it’s kind of a daunting task. So I’m a little bit nervous, but I’m really excited just to be able to serve people and love them, and to be able to bring that joy into their lives. I can’t wait.”