Exactly 50 years ago this Conference weekend, on Friday, 4 October 1963, Thomas S. Monson was sustained as the newest member of the Quorum of the Twelve Apostles, the second-highest presiding body of The Church of Jesus Christ of Latter-day Saints. At age 36, he was the youngest man in 53 years to be called as an apostle.

President Monson is the first general authority (a senior Church leader) since President Joseph Fielding Smith (1876-1972) to serve for a half-century. He has spent most of his life in full-time Church service – first as a member of the Quorum of the Twelve, then as a counselor to three presidents of the Church, and for the past five years as president of the Church himself. 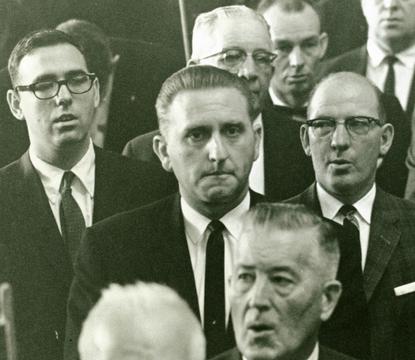 President Thomas S. Monson sits in the audience at the Tabernacle on Temple Square on October 4, 1963, moments before he was sustained as a General Authority and invited to the stand.

In his first address to the general membership of the Church in 1963, then-Elder Monson bore his testimony. “I know that God lives, my brothers and sisters,” he said. “There is no question in my mind. I know that this is His work, and I know that the sweetest experience in all this life is to feel His promptings as He directs us in the furtherance of His work.”

Throughout his 50 years as a general authority, President Monson has continued to share that testimony. Just prior to his 70th birthday in August 1997, President Monson said that one of the things that had brought him the most joy was “feeling the nudge of the Lord, the promptings.”

“You develop an appreciation that Heavenly Father knows who you are,” President Monson said at the time. “And He says, Here, go do this for me.’ I always thank Him. My only regret is that I don’t have more time to do the many things we are called upon to do. I work hard. I work long. I hope I work effectively, but I never feel I have exhausted what I should be doing. … I believe we have a responsibility to be a good influence on others.”

In an interview before his 81st birthday in the summer of 2008, President Monson was asked what Church members could give him as a gift.

“Do something for someone else on that day to make his or her life better,” he responded. “Find someone who is having a hard time, or is ill, or lonely, and do something for him or her.”

The next year, President Monson received hundreds of letters from members old and young, recounting the service they had rendered to someone in need.

“My heart has seldom been as touched and grateful as it was when Sister Monson and I literally spent hours reading of these gifts. My heart is full now as I speak of the experience and contemplate the lives which have been blessed as a result, for both the giver and the receiver,” he said in his October 2009 conference address. 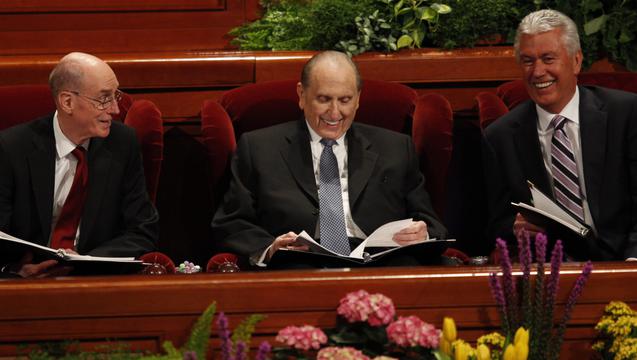 President Monson has testified of the importance of missionary work and sharing the message of Christ throughout his service in the Church.

Last October, audible gasps were heard in the Conference Center as President Monson announced a historic change in the missionary age. Young men would now be able to serve at age 18, young women at 19.

Latter-day Saints have responded to the change with enthusiasm; today, nearly a year later, the number of missionaries worldwide has grown from 58,000 to nearly 80,000.

Asked how he would like to be remembered, President Monson replied with a brief phrase: “I tried my best.”