Two in the Smoking Section 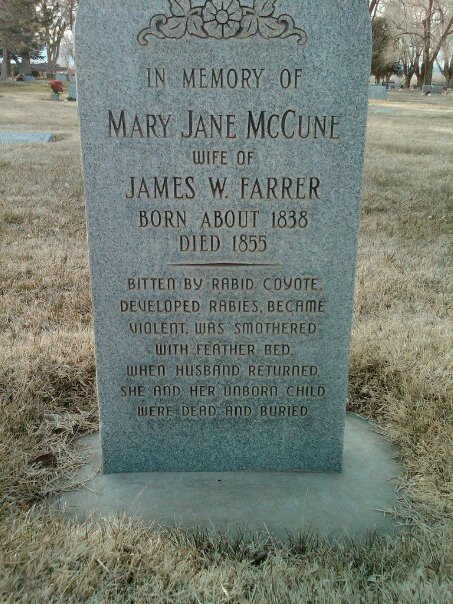 One advantage of burial: You can brag to everyone that you were bitten by a rabid coyote.

If I really want my mother to work herself into a lather, I’ll tell her I intend to be cremated. She won’t look up from her crossword puzzle, but she’ll be foaming, you know, on the inside.

Typically she’ll start with some injunction from past church leaders about the sanctity of the human body.

(Author’s note: I’m putting the link for the Church’s current position on cremation right here. Please don’t leave grumpy comments informing me that fill-in-the-blank general authority back in Ought-two said we’d be in a pack o’ trouble if we were cremated. The resulting slap fight tends to give the very patient Meridian editors acid reflux.)

I’ve never understood how sticking this precious gift of carbon in a hole in the ground to be devoured by ‘skin worms’ (you gotta love Job, or whoever was in charge of translating Job) shows any more respect than reducing it to five convenient pounds of ashes, but evidently someone, somewhere got their teeth into that one, and ever since then we haven’t been able to shift the sod fast enough.

In fact, teeth factor prominently into the confusion.

One of Mom’s favorite stories is about the time her hometown cemetery was flooded. Coffins were floating all over the place, seriously, they were just bobbing down the street like a giant rain gutter regatta, and months afterward a pair of dentures was spotted hanging in a tree. Evidently the water level had raised one unfortunate resident’s final resting place to tree level, and then-well, one must assume the chap held on while the tide receded. At least one must assume that if one is me.

You would think that reminding my mother that it’s unlikely she’ll be around to cast a vote would end the discussion, but no. Defying further religious tenets-these having to do with the visitation of relatives from The Other Side, but only as angels, never as ghosts-she promises she will haunt whichever of my children or spouses (you never know) gives the go ahead to fire up the oven. Given the enjoyment she gets out of leaving grandmotherly comments on the kids’ Facebook pictures while she’s still living (“Your profile picture makes you look like a hoodlum”) this threat of afterlife pestering carries weight.

Still, I think I’ve got at least one of my children on board, and since it’s Cori, who is five feet, nine inches of pure stubbornness, I’m fairly confident she’ll get the job done. Although, to hear her tell it, she ‘called’ cremation first.

“I’ve always wanted to be cremated,” she says, arms folded and bottom lip out, as though announcing those intentions means the rest of us will just have to come up with another way of getting our earthly remains out of the way. “And don’t choose cryogenics. I call that for Sadie.”

Our attempts at usurping Cori’s special method of departure notwithstanding, I have no doubt that when the time comes, I’ll wind up in the urn of my choosing, or-and you should see how my mother reacts to this one; she rolls her eyes so far into her skull she risks spraining them-as fertilizer for a tree next to a park bench somewhere on our estate, to be enjoyed by generations of my posterity. I admit that currently our ‘estate’ consists of a quarter acre of grass on a residential cul de sac, but still, there’s enough room for a tree. One of those little ones, like a Bonsai.

When it’s clear I’m having too much fun at Mom’s expense, she’ll invite my husband into the discussion, casting him for this occasion as The Voice of Reason. He’s usually the one to peg in these situations.

Unfortunately, she has forgotten that in this case it’s two against one. My spouse has every intention of falling more in the ashes to ashes’ category than dust to dust,’ and reminding my mother of this just frosts her sixteen ways from Sunday.

“You’re a couple of ninnies,” she’ll say, taking a page from the Desperate Times and Measures Handbook. “The state should take away your right to think for yourselves.” We can also expect a bit of hand flailing and a shouted “Ish!”, a word which has never been adequately defined but as often as not speaks for itself.

Our reasons for wanting to be cremated are different: To me, there is something ridiculous in the idea that the fanciest piece of furniture I’ll ever own is the one I can’t show off to my Visiting Teachers. They may be on hand to remark on how simple-yet-elegant the polished wood and silver fittings are, but it’s not like I’ll have the chance to preen. Far better to spend the money on something showy, like a Coach purse or a Volvo.

For my husband, it’s a matter of claustrophobia. He has no interest in spending the intervening time between his death and the Resurrection stifling under six feet of topsoil. And don’t bother pointing out that he’ll have the whole universe to run around in until his number comes up; he’ll just shudder and shake his head. “No, thanks,” he’ll say. “Pass.”

Of course, resurrection is another one of those sticking points. “What happens when it’s finally your turn and you can’t find your kidneys?” my mom asks. “You’re going to feel pretty stupid then.”

I don’t know how it was with the original Resurrection-the one when all those graves opened and the dead just waltzed out like it was another day in the park-but I bet there were a few who’d been cooling their heels long enough that most of the good stuff was long gone. I have to believe that a brand new set of replacement parts is included in the Eternal Life Starter Kit, if for no other reason than I’ve never seen anything in the Bible about zombies.

Maybe this won’t even matter. Maybe we’ll be in that crew that is still around for the Second Coming, and we’ll be snuffed out and resurrected in the twinkling of an eye, as they say. Perhaps that’s what I should put in my living will: ‘All parts available after the twinkling. See cashier for details.’

Of course, knowing at least one of my kids, that may be harder rowing than you’d think.

“Twinkling?” Cori will sniff. “Pretty sure I called it first.”

I am okay with cremation and even tongue in cheek humor. Treading on the "honor thy mother" commandment is a little much.

I loved your article and your sense of humor. My husband, who had a lot of struggles in this life, blaming most on God, desired to be cremated and his ashes buried in the old family pasture where he had had a sweet spiritual experience with his grandfather. The week of his death we found out that piece of pasture had just been permanently secured to remain in the family who gave permission for his ashes to be buried there