LDS Fiction: UNEXPECTED Boasts a Plot that Honors its Title 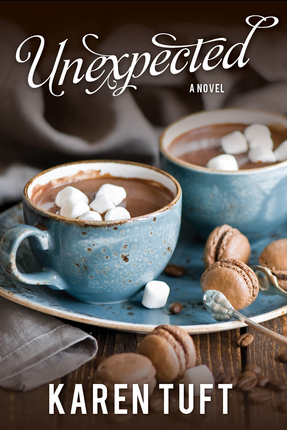 Far from being a run-of-the-mill Romance, Unexpected by Karen Tuft throws the reader a few curves.   The story is told from two different points of view. First there’s Ross McConnell’s side of the story. As an exceptionally handsome and brilliant young man in his last year of law school he falls in love with the “perfect” woman. Liz is beautiful, also a senior law student, fun, brilliant, and ready to be baptized. Her refusal breaks his heart and leaves him cynical where women are concerned, but he reaches a bargain with his parents that if he doesn’t marry by a certain age his mother and sisters will have free rein to help him find a wife.

Natalie has traveled from an unhappy, lonely teen mother to a second marriage filled with ridicule and put-downs. When her second marriage fell apart she went through a second divorce. When her ex took everything of value including her self-confidence and rarely paid child support, she began cleaning houses to support her children. Though divorced, her ex-husband still interferes in her life, runs down her self-confidence, and tries to take the children from her.

After eleven years as a highly successful attorney, Ross meets Natalie in his own kitchen when his regular housekeeper arranges for her to substitute while she takes care of a family emergency. The meeting doesn’t go well. Natalie has enrolled in several college classes and is determined to no longer let men walk all over her. After their first few disastrous encounters Ross and Natalie become friends, but he’s still suspicious of women’s motives and her low self-esteem tells her he couldn’t possibly consider her as marriage material, not that she has any desire to ever marry again.

Both Natalie and Ross are great characters and their healing and growth are important elements of the story. There are times when the reader will wish Natalie had a little more backbone and would stand up for herself more. And there are times when Ross’s seeming arrogance is a little over-powering. Natalie’s children and Ross’s sisters are also fun, believable characters. Other characters, though not drawn in as great detail, are well done as well. For a story that is largely plot driven, there is an enjoyable level of character drive as well.

The plot is fun and frequently shoots off in an unexpected direction. As in any romance there are certain predictable elements, but there are enough surprises to keep the reader satisfied and enjoying the ride.

Karen Tuft has a deep love of music and bills herself as a wife, mom, pianist, composer, arranger, and now writer. She attended BYU, but also graduated from the University of Utah with a degree in music theory. She has spent a good deal of her adult life backstage or in orchestra pits for theater productions along the Wasatch Front.