Grace Unplugged: A Cut Above Your Average Christian Film 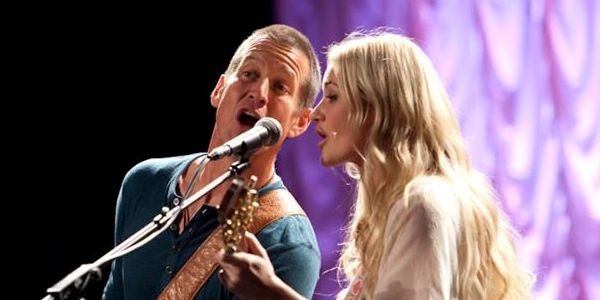 Grace Unplugged, a new film written and directed by Brad J. Silverman, tells the story of 18-year old Grace Trey. The daughter of a former rock star-gone-musical minister, Grace dreams of claiming the fame that her father felt he had to leave behind for his new religion. But when an old colleague from those former days approaches her father about a new opportunity to make it big, Grace agrees to pursue what her father will not and a tale of the prodigal daughter begins.

A first viewing of the trailer of Grace Unplugged left me skeptical as to whether it would be my cup of [herbal] tea. Hearing dialogue that includes things like “maybe you’re running from God” is not exactly your average Hollywood fare.

More often than not, cinema that is overtly Christian in its content or inspirational’ in its genre bites off more than it can chew, and the presentation of personal spiritual journeys ultimately comes off as cheesy or saccharine. I was pleasantly surprised to find that the subject matter of this film was handled with much more subtlety than I’ve come to expect from the genre.

The film boasts fairly strong performances from its principle players. AJ Michalka, best known for being half of the pop duo formerly known as Aly & AJ (now called 78violet), brought her musical abilities to the screen in the role of Gracie Trey.

James Denton portrayed good father/daughter chemistry with Michalka though it took a little time for me to warm up to their relationship. Being able to invest in that relationship was absolutely essential to appreciating the nuances of the story and its setting, so I am glad my interest in the two of them finally kicked in.

It was in the construction of the story (written by Brad Silverman, but largely influenced by the experiences of one of the film’s producers, Russ Rice) that this film was principally able to avoid many of the pitfalls of your average Christian film encounter. Grace leaves her Dad’s worship band in a small town in the south to travel to Los Angeles and, using her father’s residing notoriety and the promise of her own talent, inherits a spot in the center of the L.A. music scene.

There is a danger in portraying this story of a “wayward child,” of making the backdrop of her wandering an inherently evil place where she had no chance of spiritual survival. It would have been easy to demonize L.A. or the music industry or that former colleague of her father’s, who led her down the primrose path,’ but Silverman chose not to. He says, “This is a coming-of-age story about a girl who has to wrestle with her heart, not a story on the evils of Hollywood.”

There was great strength in his portrayal of the city of angels’ being a place that might still have a few angels. The inner workings of the industry and Grace’s position in it had their moments of ruthlessness, but you ultimately came away feeling that L.A. is just a place with its dangers and joys and complexities like any other place. Taking the emphasis off the setting brought the emphasis back to Grace’s personal journey and her relationship with her father, which elevated the film from broadly drawn allegory to nuanced character study.

A major player in that effect was the casting of Kevin Pollak (The Usual Suspects, A Few Good Men) as Frank “Mossy” Mostin, Grace’s new manager. He brought legitimacy to the setting of the film and managed to find that sweet spot between merely antagonizing a situation and being an all out caricature of the big, bad businessman. Pollak says he was initially drawn to the film because of its “refusal to traffic in cheap clichs by making Mossy a stereotypically seedy and untrustworthy agent.”

It is indeed this film’s avoidance of melodramatic devices that sets it apart from other films in its genre. Michalka described the film as “a feel-good movie you can go see without being preached at.” A description that in general I would deem surprisingly accurate.

One of the performances in the film that just brightened the screen and brought smiles to every viewer was that of Michael Welch (known for his role in The Twilight Saga as Mike Newton) who played the intern at Sapphire Records where Grace comes to start her career. His is a fairly small role. He plays a fellow Christian who heard Grace play with her Dad when he was in high school and was really struggling. His character tends to be the most heavy-handed in redirecting Grace’s considerations heavenward, but you let the potential for cheesiness slide as an audience member because he’s just so charming. He brought needed comic relief and humanity to the interpersonal exchanges Grace has in L.A.

That initial skepticism that colored my expectations for this film was, for the most part, eliminated once I actually experienced it. It still had its moments and sequences of dialogue that backed it into a corner belonging to a very specific audience and the cameos of Jamie Grace and Chris Tomlin (both Grammy-nominated Christian musicians) went unappreciated by an LDS upbringing that kept me ignorant of mainstream Christian celebrities.

But Grace Unplugged represented a really positive step forward in elevating the quality of Christian cinema. With high production quality and by drawing from the universality of father/daughter relationships and the need for personal peace with one’s choices (sentiments appreciated even outside the realm of a religious audience), the film managed to take one step further out of the niche and into the mainstream while still honoring the filmmakers’ ultimate devotion to God.

Grace Unplugged comes to theatres October 4. To find a theatre near you click here.