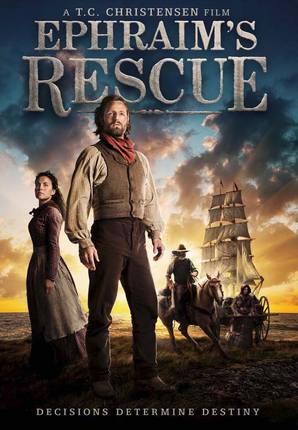 Ephraim’s Rescue, writer/director T.C. Christensen’s follow up to his acclaimed 17 Miracles, is an even better film than that one, for reasons I enumerated in my review. Released this week on Bluray and DVD, Rescue tells the story of true-life pioneer hero Ephraim Hanks (Darin Southam, The Last Mans on Earth), a man who developed a tremendous spiritual gift of healing through faith and obedience. Hanks responded without hesitation to Brigham Young’s call to save starving and dying members of the Willie & Martin Handcart companies.

Katherine Nelson (Emma Smith: My Story) and James Gaisford (The Letter Writer) contribute profoundly touching supporting performances as an English mother and her son making the journey across the plains, facing bitter cold, frostbite, starvation, and death on all sides. Mia Selway gets many of the best lines as Gaisford’s feisty love interest. The script draws deeply from historical sources and deftly balances romance, humor, tragedy, and tremendously uplifting moments. Christensen’s cinematography is wondrous to behold (especially on Blu ray), while Paul Cardall lends fine support with his moving musical score.

The Bluray and DVD versions of the film contain a handful of worthwhile special features. A feature-length audio commentary with director Christensen and stars Southam and Nelson reveals a touching camaraderie as well as fascinating “making of” anecdotes (how did they pull off that rattlesnake scene?) and a candid admission of what in the film is historical fact and what is creative license.

There are two music videos. In one, Paul Cardall performs “Life and Death,” a lovely piece of music that was, with permission, adapted from a song written for the television program Lost. The other finds Dallyn Bales performing “Kindness,” a beautiful song inspired by Isaiah 54:7-10. A making-of documentary takes viewers behind the scenes with interviews, footage, and historical insights. Four deleted scenes are fun to watch, but understandably cut from the film to streamline the pacing.

I’ve been rather surprised at the number of Latter-day Saints I’ve spoken with who’ve yet to see this film. They’re missing out on perhaps the finest movie of the Mormon Cinema movement. I recommend it highly; a purchase would not be regretted. The film is available from Deseret Book on Blu-Ray and DVD, as well as Amazon (also on Blu-Ray and DVD).

Jonathan Decker is a licensed marriage and family therapist (visit his web site) and film critic with KJZZ-TV and mormonmovieguy.com. His book, 250 Great Movies for Latter-day Families (with a foreword by director T.C. Christensen) is now available for purchase from Deseret Book, Amazon, and Barnes and Noble. 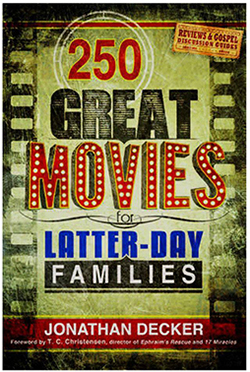 we were able to see this movie in the theater before it was released to dvd. i do not agree with many of your movie reviews, but you got this one right. btw- this movie should be seen at least one time, on the big screen at your movie theater ::))