Grace Unplugged: On “Owning” Your Religion 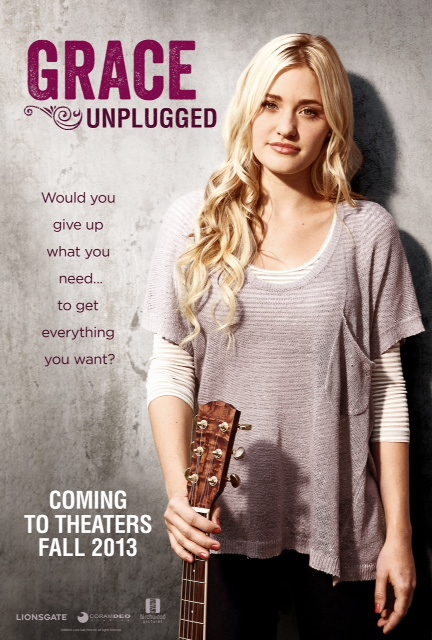 A new Christian film looks at standing by your religion in under the toughest pressures. It is scheduled to open Oct. 4. Click here for locations.

I attended high school in the “mission field” as it were. There were perhaps 4 or 5 other members of the Church in my school of 4000. In 9th grade, I was handed a 30-point list by a total stranger, while I was at my locker, of reasons why the Church is not only wrong but evil. In 10th grade, a boy handing out pretzels stopped before handing me a bag and said, “Wait, are Mormons allowed to have salt?” The grades that followed were full of “How many moms do you have?” and “Are you allowed to dance?” All told, I found my community and my high school and especially my beloved best friends to be very respectful of my religion, but I was perpetually in the position of standing out and standing up for my faith.

That’s what I used to think “owning your religion” meant. I thought it meant refusing to perform on Sunday and a conspicuous lack of the profane in my vocabulary. I thought it meant astonishing everyone with my refusal to drink or attending church even when I was on tour and it would mean leaving the group behind and some inconvenience.

In Grace Unplugged, a new film from director Brad J. Silverman, the main character Grace leaves her family and in some ways her faith behind to pursue a music career in Los Angeles. To set the spiritual journey that Grace goes through in this film against the backdrop of the music industry in the City of [hardly] Angels implies just what I thought in high school, that “owning your religion” means being the lone voice for something in a sea of naysayers.

It wasn’t until I moved to Utah after high school that I realized how much the naysayers had defined me. I was counting the days until I’d start my new life at BYU (mostly for all the Mormon boys; it wasn’t until later that I appreciated the educational aspect of the higher education), but when I arrived I found that standing up for my values become less important in a sea of people that purportedly sought the same lifestyle as me. I slinked right into the lazy river and just let the current take me because it seemed like all of these people were more or less headed where I wanted to go.

So, certain behaviors that I’d always avoided became a routine part of my life. It was nothing really serious–this isn’t a moment of kitchen table confessional,’ but I saw that other people were doing those things and still seemed to be good Mormon kids so why couldn’t I?

I became sloppy. I didn’t have to “own my religion” anymore because there wasn’t anyone to be an example’ to. There wasn’t anyone to turn to me in gym class and ask what Mormons believe happens after we die. Nearly everyone on this campus would be prepared to draw the same little chart with circles and arrows that I would, to explain the Plan of Salvation and besides, I didn’t have gym class anymore-this was the big leagues.

In the aforementioned film, the main character meets an intern at the record label that she’s working with who is also a Christian. He senses she’s feeling overwhelmed and confused and gives her a copy of his favorite book. It’s entitled Own It by Michael and Hayley DiMarco and though the cute intern didn’t give it to me, I have a copy as well.

The book’s opening section talks all about the concept of “ownership” and it was in reading those pages that I realized the error in my thinking towards that term. Though I’ve likely never acknowledged it, I think I’ve always thought of “owning” my religion in the way that you “own up” to something. Admitting to some previously undisclosed [and potentially shameful] information. In planning a New Year’s party with friends, I’d have to “own” the fact that I wouldn’t be drinking with them at midnight no matter how much bubbly feels like just the thing for such a moment. I realize now that in the time that has passed between that shell-shocked freshman fall and the present, “ownership” has grown to mean making something mine; taking care of it the way you would a treasured possession.

After that enlightening exploration of spiritual “ownership,” the book goes on to describe each in its own section, the ways that owning your faith will save you, cost you, change you, complete you and free you. It talks at length about the perplexity of the Christian experience when we are asked to “be ye therefore perfect” and yet live as imperfect beings that will always fall short of that admonition. It is only greater understanding and ownership of our faith that can make up the difference. It is only the atonement of Jesus Christ that can make up the difference. 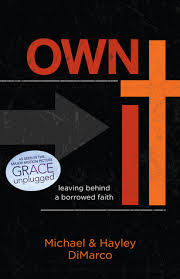 I can understand what Gracie Trey would find in this book to make her reexamine her choices and consider that her knees might be the best place to be to talk it all out with someone. One of the great strengths of the film is that it really doesn’t over-dramatize the “evils” of the L.A. music scene. Silverman manages to paint the picture of a place that has its pitfalls and dangers, but is not inherently evil. It isn’t a story of a girl named Grace who shouts into the eye of a storm. Her journey is as nuanced and has as much to do with interpersonal relationships and quiet exchanges with divinity as Own It, the companion book does.

As much as it is important to be a rock firmly affixed in the midst of a rushing stream and as meaningful as those stories in the New Era always were about kids that “just said no” at a party, I think “owning your religion” is what happens after the party, what you do when you are accountable to no one, but yourself and the Lord.

To be honest, it was easy to be the person that had to leave the room because of the content of a film everyone was watching. It was just not that big of a deal to excuse myself from certain situations or refreshments. I understand that it is harder for some people than it was for me. I had an incredible loyal and dedicated group of friends in high school that got to know my standards so well that they said no for me. The point is, the hard part isn’t standing out (half the population is already trying to find a way to do that anyway) because you get the immediate reward of knowing you’re choosing the right, that you’ve represented your beliefs and perhaps had some sort of impact on the people around you.

The hard part is standing up just as strongly when you’re alone or when you have to choose to be truly vulnerable before the Lord in prayer. It’s harder to put aside that last hour of TV in exchange for more in-depth and powerful scripture study before bed. It’s harder to be absolutely true on your visiting teaching or pay attention to the speakers in Sacrament than to clarify to a co-worker that Mormons DO believe in the New Testament.

Perhaps you are faced with more difficult stakes like Grace in this film. Perhaps in front of you is what you think you have always desperately wanted and what seems to stand in your way is some disparity of standards or priorities between you and the people that can get you that. It is in that moment that you must choose, as Grace must, what version of yourself and your life you choose to own. (And maybe if you’re lucky you’ll get to figure it out with a great soundtrack behind you like she does).

Owning your religion just might mean giving the Lord more of your time and your heart and your will on a regular basis without feeling the need to tell everyone about it. It might just mean understanding better who you are what you believe in and depend on. Owning your religion might be less about what happens over the pulpit and more about what happens in quiet moments of prayer behind closed doors.

Your depth of thought and understanding is enviable and I'm twice your age. Thanks for another "light-shining" moment. You're really good at this!

Excellent analysis. If we could get LDS speakers or other faith based speakers at schools I would have my children attend college there than the Y. Keeping the faith is much more involved than obtaining it. Harder to say no or object around "Friends" (people of same values) as you noted. Thank you for your comments