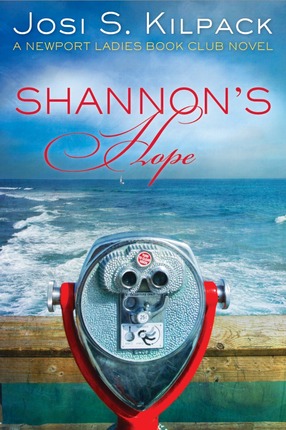 To be honest I’d had enough of the Newport Ladies Book Club series and hadn’t intended to review the second wave of books in that series, but Shannon’s Hope by Josi S. Kilpack arrived one day and in a rush to go out the door to an appointment where I knew I’d have plenty of waiting to do, I grabbed the top book on the stack. You guessed it, Shannon’s Hope.

Shannon’s Hope was a great surprise. Instead of rehashing the same events from still one more perspective, this book could easily stand alone and barely touches on the events of the first series. Shannon is married to a man she adores, has a twelve-year-old son who has been the pivotal point of her life since he was born, and she has a troubled, drug addicted twenty-one-year-old stepdaughter whom she loves and wishes to help. The stepdaughter, Keisha, left her mother’s house two weeks ago and hasn’t been heard from since, though Shannon has called her daily without a response.

Finally the call comes, in the middle of the night, begging Shannon and her father to come get her. This is the beginning of months of turmoil for their family as Keisha lies and manipulates, her father insists on a tough love contract, and Shannon believes Keisha just needs unconditional love and someone to believe in her. Shannon tries so hard to trust Keisha, hides important facts from her husband, and has little time to devote to her son.

As a professional pharmacist she knows better than to trust an addict, but just can’t believe someone she loves and whom she believes needs her, can’t be loved into turning her life around. Her involvement in the book club is lackluster, though she is close to Ruby who is her aunt. Through another book club member who is also a customer of the pharmacy where Shannon works, she becomes aware of still another member’s drug problem. She knows what to do and has the right instincts, but can’t seem to trust her instincts as well when it comes to Keisha.

Becoming an enabler to a drug or alcohol addict appears to most of us to be a stupid thing to do and we’re so sure we’d never be so foolish. The fact is for most addicts there’s someone who loves or fears them enough to try to smooth their path, people who need to be needed and who unconsciously see the addict as helpless or ill, someone who needs help and love. A loved one’s addiction makes the enabler feel indispensible, loved, and needed. Most of us don’t want a loved one to go to jail, be seriously injured in an accident, or be publicly embarrassed, so we step between the negative behavior and the natural consequences of the addict’s actions. Without consequences the addiction continues.

Kilpack’s Shannon is skillfully drawn as a good woman who cares deeply for her family, but has a tendency to over worry and take too much responsibility. She’s intelligent, a little socially inept, getting by on too little sleep, feels her son letting go of their overly close bond as he becomes a teenager, is overloaded by her husband’s business slump which has left her working overtime to support her family, and has a deep need to feel appreciated.

Along with realistic characters, Kilpack has created a skillful picture of addiction, the conflicting demands of family life, and a plot line that flows smoothly and easily until the reader realizes before the characters do that changes have occurred or were there all along unseen, and that Shannon has pushed herself into a corner, put her marriage and career at risk, and has created problems rather than solved them.

Josi lives in northern Utah with her family. She’s the author of a highly popular culinary mystery series with the tenth volume, Rocky Road to be released this month. (She couldn’t resist throwing in a recipe at the end of Shannon’s Hope.) She has also written a number of stand-alone novels and has been the recipient or finalist for several awards.