Missionary Moment: Lost in the Woods 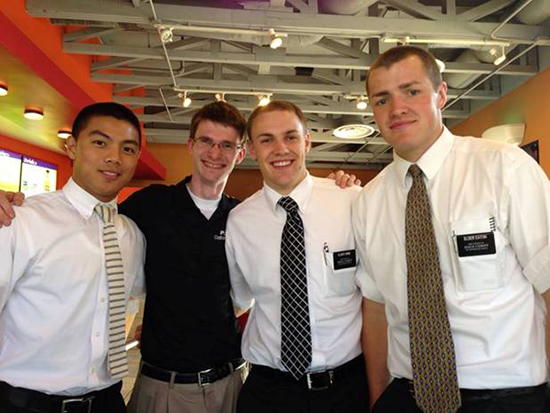 After eating dinner at a local restaurant, I felt like taking a long walk, so I decided to explore some trails in the woods located behind the restaurant.  However, as I walked alone, it grew dark, and I soon realized that I was lost in the woods near a massive apartment complex.  I did not recognize any landmarks.  I then saw a man waving at me from the apartment parking lot.  He was dressed in a white shirt and tie.  He and his companion were smiling and appeared friendly.  They looked to be about my age.

As I approached the two friendly strangers , they introduced themselves as Elder Gregg Karren, from Canada and Elder Aaron Kirkham from Pocatello, Idaho.  We talked under the street light about religion and faith, which I enjoyed.  They joked with me that they first thought I was a missionary because I was also wearing a white shirt.  I told them about an orchestra concert that I would be performing in a few days.  Elder Kirkham wrote it in his planner and said they would try to attend and watch me perform.

Elder Kirkham then gave me a Mormon.org card with their telephone number so that I could keep in touch with them.  I finally figured out how to get out the complex, and  I made it safely home. I then texted the missionaries, “Can you meet with me tomorrow, say, 6:00 p.m.?”  They quickly responded affirmatively.  There was something about them and their friendly nature that seemed very attractive to me.  I wanted to learn more about their message.

So we met again the following day, July 3, 2010. The elders then taught me about The Book of Mormon and about how the book was translated by Joseph Smith from ancient records.  The missionaries invited me to read The Book of Mormon and pray about its truthfulness.  I accepted their challenge.   I was so impressed with their message and the things I was feeling in my heart that I even invited myself to attend church the following day.  The elders immediately arranged a ride for me.

When I attended my first LDS church meeting on July 4th, I felt like I really needed to be there. The Spirit was so strong and the testimonies of the members were amazing.  The elders explained that this was a Fast and Testimony meeting.  When it concluded, Elder Karren leaned over and asked me, “So how do you feel?”  I told him truthfully,  ” I feel right at home; this is where I need to be.”  He smiled.

I met with the missionaries regularly after that and checked up with them daily by phone and text.  I read the entire Book of Mormon in just 12 days. I knew it was true within 3 days.  On Saturday, July 31, 2010, I entered the waters of baptism, one month after my “accidental” meeting with the missionaries. My baptism was the greatest day of my life. The room was jam packed, because so many of the local members wanted to show their love and support for my decision.  One year later I was called to serve a mission for the church!

I know that I am a part of Christ’s true church!  It was such a blessing and tender mercy to meet the missionaries while coming out of the woods late one night. Now I know why I received an impression to take a walk and then got lost until the elders arrived!  They rescued me spiritually!  I know that The Book of Mormon is true and that we have a living prophet to lead and guide His Church.

Thanks for sharing, CJ!