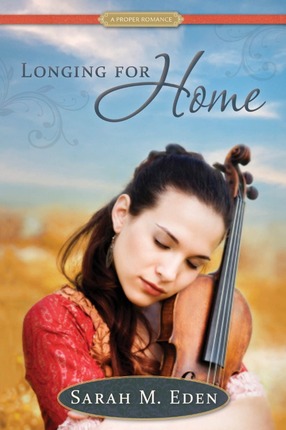 In a departure from her greatly loved Regency Romances, Sarah M. Eden has written Longing for Home, a General Fiction novel which will appeal not only to her romance fans, but to men and women who enjoy historical fiction and to those who simply like a good story.

Kate Macauley is a young Irish woman who survived Ireland’s Great Famine, but in the process paid a terrible price for her survival. Though she was only a child, Kate holds herself responsible for the death of her younger sister and for the loss of the family farm. Added to her load of guilt is the theft of her father’s violin. When he took her to a nearby city and forced her into servitude, she took the violin, believing he would come back for it, and she would see him again. He never returned or made any contact with her in the following eighteen years. Over the years she received only a handful of brief letters from her mother, but never a message from her father.

After leaving Ireland for America where she believes she can earn more money and eventually buy back her father’s farm, thus buy back his love and forgiveness, she works in Baltimore for two years and earns little. When an opportunity arises to travel west to work for a much higher salary, she accepts the post, only to be fired as soon as she arrives because she is Irish. She manages to persuade Joseph, the rancher/businessman who hired her, to reconsider. Their agreement is broken and she is fired again when she learns he has two young daughters he expects her to care for along with being his housekeeper. Remembering her sister’s death, she refuses to be responsible for children.

Leaving Joseph’s house in a downpour, she struggles to find the home of the two men, Tavish and Ian, who gave her a ride part of the way from the railroad to the remote Wyoming community. She finally takes refuge in a barn. In time she is returned to Joseph’s home, but only until he can arrange for another housekeeper.

The town is sharply divided between the Irish and those who live on the “Red Road.” Joseph barely maintains peace by staying neutral and hiring an Irish housekeeper places the balance between the warring factions in a precarious condition.

Kate is accepted and even admired by the Irish, but becomes the focal point of the hate and bigotry of the other half of the community. For the first time since becoming a servant at the age of eight she finds acceptance and feels as though she is once again part of a family. A letter, the first in three years, from her mother turns her world upside down and leaves her with a terrible choice to make.

I didn’t find Kate a particularly likable character, but it is a mark of Eden’s talent that I felt great sympathy for her and cared what happened to her. Her slow and painful growth as a person who has suffered a great deal is played out in exquisite detail, only marred at the end by a too hasty conclusion to the story. Tavish and Joseph are wonderful characters, though I would have liked more of the story to share their thoughts and feelings. The characters are developed well and show moving growth throughout. The author is extremely talented in her ability to create characters so believable, the reader can’t help wanting to know them on a personal and real level.

Parts of this novel are too drawn out, yet the ending is so abrupt it’s less than satisfying. Remarkable research has gone into this story and it portrays a genuine segment of American history most people today know little about. Some novels stay with the reader long after reaching the last page; this is one of those books. It receives my hearty endorsement.

Sarah M. Eden has a Bachelor’s degree in research, which may explain why the language and background of her books feel so authentic. She, her husband, and their children live in Utah where she is actively involved in supporting them in their activities, spending hours at the library, writing, and she recently enjoyed a dream/research vacation with them in Ireland.

LONGING FOR HOME by Sarah M. Eden, published by Shadow Mountain an imprint of Deseret Book, 432 pages, Paperback $15.99, also available on CD and for e-readers.