LDS Fiction: Belonging to Heaven is Big in Scope 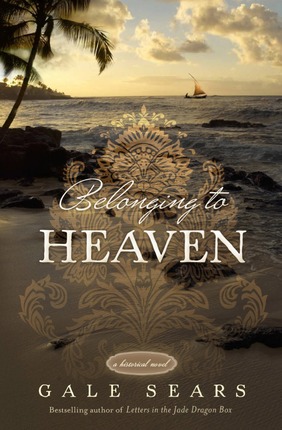 How can I describe Gale Sears’s new book Belonging to Heaven? It’s Big! I’m not referring to its over four hundred page length. It’s big in scope, in content, in love, sacrifice, faith, and in friendship. It also represents a huge time commitment to research for historical accuracy and for background and cultural accuracy.

Belonging to Heaven is the story of a place that is almost mythical in legends as a paradise on earth. It is also the story of two men. Jonathan Napela is a descendant of Hawaii’s ancient royal line, a man of importance in his community, and the husband of beautiful Catherine (Kitty) Richardson. George Cannon is an English immigrant who endured the persecution in Nauvoo, knew the Prophet and his brother personally, and walked from Nauvoo to Salt Lake when the Saints were driven from their city, then was called on two missions–first to California’s gold fields, then to Hawaii.

George is deeply committed to preaching the gospel in the Sandwich Islands as the Hawaiian Islands were called in the 1840s and 1850s. The tropical environment is like nothing he’d seen before and though he has been advised he is to teach the white population, it is the Hawaiian natives he is drawn to. He feels inspired to learn the language and to go on a walking tour of the island. Toward the end of his tour, he meets Jonathan who had a dream that a white man would come with a message for him.

George goes on to baptize hundreds of converts and develops a firm friendship with Jonathan. Jonathan’s wife is always supportive, though she never actually gets baptized. The local ministers create many problems for the missionaries and the natives who join the Church. They even cause Jonathan to lose his post as a judge. The two friends undertake the mammoth task of accomplishing the first translation of the Book of Mormon into Hawaiian.

Long after George returns to Utah where he becomes secretary to Brigham Young, marries, and rears his own family, Jonathan and Kitty learn that she has leprosy. When she is sent to the lepers colony of Moloka’i, he can only accompany her at great peril to his own life. He learns through great personal sacrifice that service to others is the purest expression of love.

This book is based on the true stories of George Cannon and Jonathan Napela, two men who have been honored greatly by the Hawaiian people, the Catholic Church , and The Church of Jesus Christ of Latter-day Saints for their service and love to the Hawaiian people.

Sears presents a masterpiece in her careful research, not only of the lives of two great men, but in the background, topography, culture, and legends of a once independent nation which became America’s fiftieth state. Not only is the book rich in historical information, but is a captivating story. Sears draws the reader in with characters who are realistic, kind, caring and sometimes naive, but who also exhibit the flaws, weaknesses, and insecurities found in ourselves. Some of the incidents, especially those dealing with the treatment of lepers, is painfully harsh. On the other hand, some of the generosity depicted is almost unbelievable.

Gale Sears is known for her in-depth research. She has received numerous awards for her work and a short Christmas story she wrote a few years ago will become a movie for this coming Christmas season. Christmas for a Dollar is currently in production. Sears received her BA in playwriting from Brigham Young University and a master’s degree in theater arts from the University of Minnesota. She and her husband, George, are the parents of two children and live in the Salt Lake Valley.

BELONGING TO HEAVEN by Gale Sears, published by Deseret Book Company, 438 pages, hardback $24.99, also available on CD and for e-readers.