Treasures of the RestorationClimbing the Mount of Miracles | Meridian Magazine

Treasures of the RestorationClimbing the Mount of Miracles 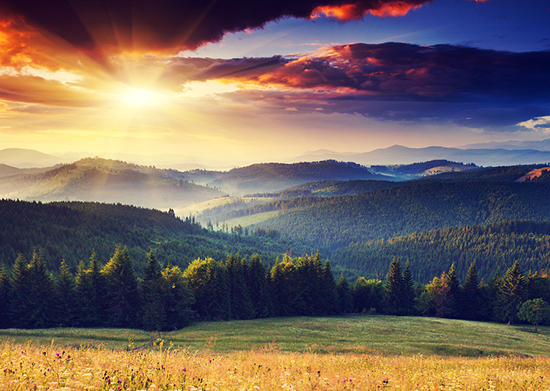 Humans have many amusing abilities. Perhaps none is more intriguing that the ability to casually authenticate our own beliefs while labeling as bizarre and absurd those different from our own-those beliefs with which we disagree.

This hypocritical human tendency showed itself prominently during the 2012 presidential campaign. One editorialist wrote: “Mitt Romney would have us believe that Joseph Smith was a prophet and that he was given golden plates by an angel with the truth written on them. Mitt has got to be lying to us. He cannot possibly believe this.” (emphasis added)

I’m guessing that the writer of the editorial, one Mr. John H. Nelson of Horatio, Arkansas, believes absolutely that Elijah brought fire from heaven, Elisha cured Naaman of leprosy, and Moses parted the Red Sea. Why are his spectacular miracles more credible than those of the Restoration? Why do his miracles make sense and ours are foolish?

We all set boundaries on our faith. Each of us decides where to draw the line between holy miracles and absurd gullibility. We draw the line based on our experience and beliefs. If we were raised with biblical miracles, they probably don’t sound outrageous in adulthood. If we grew up hearing the miracles of the Restoration, they seem entirely natural and like a continuation of God’s work on the earth.

Maybe the question for those who grew up hearing about biblical but not Restoration miracles is: Why should the miracles stop? Why would God stop showing His hand in the human story? The LDS answer is that He never has stopped. The miracles continue.

Research shows that Latter-day Saints in America are dramatically more likely than fellow Americans (96% to 47%) to believe that miracles occur today just as in ancient times. (See A Portrait of Mormons in the U.S. by the Pew Forum on Religion and Public Life.) In fact, LDS scripture teaches that miracles are the measure of our faith.

It is by faith that miracles are wrought; and it is by faith that angels appear and minister unto men; wherefore, if these things have ceased wo be unto the children of men, for it is because of unbelief, and all is vain. (Moroni 7:37)

For LDS the thing that requires explaining is any absence of miracles-not their presence. We do not see God dramatically changing His modus operandi anywhere in history. He has always been a God of miracles (Mormon 9:19). It is true that He accommodated His children’s immaturity sometimes by providing milk when they were not ready for meat; but He has always acted in human history in ways that defied human explanation.

The Challenge for the Saints

It is tempting for us to be smug in our attitude toward other Christians: “We still have miracles and you don’t.” However, I wonder if we, too, tend to limit God’s willingness to orchestrate miracles in our lives. I suspect that God might challenge us to be even more open to His power. I wonder if the reason we do not experience some of the miracles described in scripture is that we have placed them outside the boundaries of respectable credibility.

Ancient people who were not overawed by the powers of science may have been far more willing to turn to God’s power than we are. Alma fainted into a trance-like state and communed with angels. Lehi and Nephi had marvelous visions. Might the Lord be able to provide us a deeper form of communion with the divine if we were open to it? Might we, like Enoch, have power over the forces of nature if we were ready to use that power in holy ways? Might we, like Joseph Smith, experience far more heavenly influence in our lives if we stretched ourselves? Or do we, like the children of Israel, sit at home worshiping traditional truth while only the brave and faithful climb the mount to see God?

God hath not revealed anything to Joseph, but what he will make known unto the Twelve, and even the least Saint may know all things as fast as he is able to bear them.

As much as anything, the Restoration may be an invitation to engage in vigorous dialogue with Heaven. We may be living far beneath our privileges in this area. President Uchtdorf asked the brethren of the Church: “Are we as priesthood holders living below our privileges when it comes to the sacred power, gifts, and blessings that are our opportunity and right as bearers of God’s priesthood?” (April 2011 General Priesthood Meeting)

In terms of modern miracles, we LDS are perched precariously above the bulk of the Christian world but below the scriptural standard. Would God have us climb farther up the mount of miracles? Would He have us more fully appreciate the myriad of miracles in our daily lives while seeking the will of God to know how else we could draw heavenly power into the world around us?

For behold, I am God; and I am a God of miracles; and I will show unto the world that I am the same yesterday, today, and forever; and I work not among the children of men save it be according to their faith. (2 Nephi 27:23)

Thanks to Barbara Keil for her contributions to this article.

Brother Goddard will be presenting three series of classes at BYU Campus Education Week: The Complete Parent; Some Surprising Discoveries in Marriage; Thriving in Life: Distinctive LDS Doctrines that Lead Us to Greater Joy. They will be taught in the evenings of August 20 to 23. For more information or to register, go to: https://ce.byu.edu/edweek/ Please come join him!

Sign up for free E-mail Series with Helpful Ideas

If you are interested in ideas for personal well-being, strong marriages, or effective parenting, you are invited to sign up for a free resource we have created at the University of Arkansas Cooperative Extension Service. Navigating Life’s Journey is a weekly e-mail series that offers helpful ideas based on research. To sign up for any or all of these messages, go to

You may be interested in Brother Goddard’s newly revised books: The Soft-Spoken Parent: 55 Strategies for Preventing Contention with Your Children and Modern Myths and Latter-day Truths. You might also enjoy his popular Drawing Heaven into Your Marriage. All are available at online booksellers.

In desperate need of a miracle of healing for our friend and brother in the faith who accidentally ingested peanuts while alergic to them. This 18 year old young suffered oxygen deprivation for over 15 minutes. I would have more faith in healing miracles if I'd witnessed them more often. No doubt that the will of the Lord can do anything, but will he do anything for this young man. Anything less than a half recovery doesn't seem to be a miracle for me. A full recovery or something close to it would be awesome and faith promoting. Can the Lord do anything? We believe, oh Lord help thou our unbelief!

I agree with Hal Cooper's comment about the increase of miracles in our lives. I personally experience small miracles almost every day in the form of information coming to me to fulfill my calling as a ward mission leader, as well as events that move people to the Church. It is almost astonishing to me that whenever a question about a gospel doctrine or practice comes to my mind, within 24 hours I will have information on the subject even without asking. I could go on and on. Perhaps it is because I am getting older and the Lord is more merciful to old people, but the miracles occur so fast I can hardly keep track. It is truly a "Marvelous Work and a Wonder."