Summer in the Washington, D.C. area where we live means lots of residential moves as government and military families with changing assignments relocate in time to get settled before school starts.  Several years ago new neighbors in a townhouse development around the corner from us had the moving story to end them all.

This family was anxious to get into their new home, although repairs were not quite complete in an upstairs bathroom.  The work was scheduled to be completed within 24hours, so the landlords gave permission for the family to move in and spend their first night.

The bathroom’s whole bathtub and shower had been removed, leaving an open hole in the floor.  The bathroom door was kept closed as repairmen and moving men came and went.  True to their word, the new tub/shower was installed by the mid-day. With the hub-bub of moving, kids, and all those boxes, however, no one noticed until after 10:00 p.m., that Shasta, the cat they had owned for 12 years, was missing.

They started calling her name inside the house, then went outdoors, calling and calling.  They went to the kitchen and grabbed a stack of cat food cans and went around the house, opening the pop-top cans, a sound that always brought her running.  No cat, no cat, no cat – just increasing tears and panic from overly tired kids and Dad running around the new neighborhood in his pajamas.  Mom was trying to put the kids to bed and consoling them with her “shh … shh, it’ll be OK” murmurings when 10 year old Zach said, “Mom!  You shhh!  I hear Shasta’s bell!”  “No, honey, she replied – Dad will find her.”  “No, Mom!!!”  “Please stop talking and listen.  Listen!”

The pieces, of course, fell into place quickly.  Shasta had gotten into the bathroom, down the bathtub hole and into the crawl space.  The repairmen, not knowing, had gone ahead and installed the tub and sealed her inside.  So then there were phone calls, apologies, laughter, relief and best of all, a cheerful repairman at midnight to get the cat out ASAP!

In and of itself, that’s a great and entertaining story, but there’s a powerful lesson that’s easily applied to many areas of our lives, including the choices required for a healthy body. That lesson is simply this- What would have happened if Shasta hadn’t had that bell on? 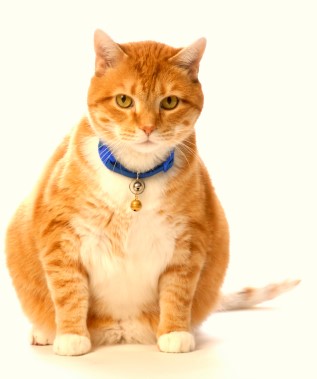 According to one ancient fable, told in many different versions, a group of mice (or rats) had been troubled by sneak attacks from a cat. The mice held a meeting and decided that there was a simple way for them to receive early warning of the cat’s approach. All they had to do was to put a bell around the cat’s neck. They were all pleased with their decision till one farsighted mouse spoke up and said that the idea was fine, but who would bell the cat?

Although putting boundaries around unhealthy eating may seem simple, obvious and a no-brainer too many, for those of us who are compulsive eaters or addicted to sugar or diet soda, the word “daring” is exactly right for the power required to take long-term action on bad habits and addictions.

The dare:  for six months they would carefully follow the Weight Watchers plan.  If it didn’t work, then the myths were true.  If it did, well … the potential seemed too good to be true!  In those six months, she lost 50 pounds.  Her mother lost a great deal of weight also.  Over the next year, they both reached their goal and put down the falsehoods.  They learned about healthful eating, portion control and exercise. They learned about being honest with themselves and their bodies.

Her before and after pictures are still in my heart and mind.  The first one, sitting in an over-sized baggy dress with her mother.  The second one, down nearly to her goal weight, in white capris and a red top at a miniature golf course, laughing and smiling.

Back to us … what if there had NOT been a bell on Shasta? The answer, of course, is that she would probably have perished and they would never have known how.  In that light it didn’t seem daring at the time to put on that collar with a bell, yet it saved her life.  Where can we secure bells when healthy choices are bothersome, inconvenient or boring… the choices that extend or even save our own lives?

Here’s a question for you: What are your bells? How do you know to take action when the bell is just a gentle tinkling rather than a clanging alarm?

If you read my June article on jeans, then they’re an excellent bell! LINK TO ARTICLE CLICK HERE
So are photos, your energy level, what you’re choosing to wear, what you’re eating…. and whether you’re exercising. You know the bells as well as I do.

To keep them from ringing too loudly, here are my go-to aids:

1. Accountability!  Weekly Sacrament, then yearly Tithing Settlement and other interviews provide necessary accountability. In the same way, health progress and success require some kind of regularly scheduled weigh-in (one that works for you) or regular trying on of “true-test” jeans, slacks or outfit.  No need to wear it, just try it on regularly.  How it fits is a ringing bell.

2.  Exercise!  An old poster in the gym of my children’s elementary school has centered me through the years-

It helps me control my appetite
9.  It counters anxiety and depression
10.  It provides a source of fun and entertainment.

3.  An inspiring photo.  Either of you at a realistic weight (please, please please – not overly slender!!!!), or with a cutout from a magazine with your head pasted on, or go to the link I provided last time:  www.WeightMirror.com

4.  Your wedding ring, or your heart.  Simply touch your wedding ring or put your hand to your heart as a reminder that it’s not just about you – it’s your family and your eternity that will be blessed as well as your physical body.

5.  And best of all?  As I told a woman who asked me this week:  “What do you think is the secret to lasting weight loss?”  Love, hope and respect even charity, for your body as a precious gift from God.  With that charity will come the drive to find the program and foods that are best for you, as well as the power to apply the answers.

Can you hear the bells for your sacred health and wise eating?  If you can’t, go get a few little bells at the craft store and put them on the kitchen window sill as reminders.  Then just listen, they’re there when you when you dare, with prayer, to tie them on.

Carolyn Allen is the Author of 60 Seconds to Weight Loss Success – One Minute Inspirations to Change Your Thinking, Your Weight and Your Life, available at her website.

She has been providing mental and spiritual approaches for weight loss success both online and in the Washington, DC community since 1999 presenting for Weight Watchers, First Class, Fairfax County Adult Education and other community groups. She is the owner MyMiracleTea.com, an herbal detox tonic in keeping with the Word of Wisdom, now used by Meridian readers and missionaries everywhere.  CLICK HERE.

She is a mother of five and the grandmother of a growing number of delightful grandsons and granddaughters and lives with her husband, Bob, in Springfield Virginia, where they serve as the nursery leaders.

A goodly number of years ago. I was sitting ina recliner and got up to do something. Our kitten went missing while I was up. We could hear it meowing, we called, NO kiiten. After about 20 minute of searching I sat back down for a few moments, pushed the recliner back. The kitten jumped into my lap. It had been stuck under the chair.. Cats do not have owners, they have servants.