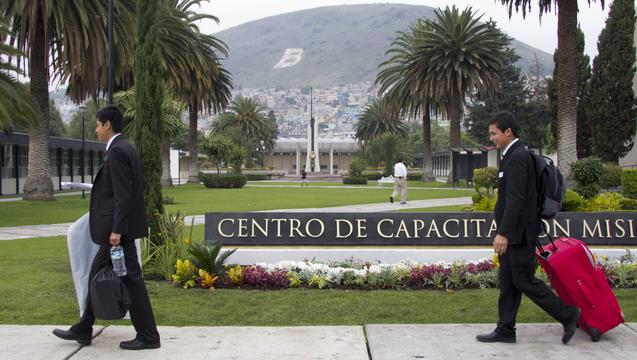 On Monday, the Mexico City MTC moved from a smaller building near the Church’s Mexico City Temple to a 90-acre campus that recently housed a private Church high school, the Benemerito de las Americas. At the MTC’s old location, around 125 missionaries were trained at a time, most from Mexico and Central America. The new location can accommodate over 1,000 missionaries – nearly 10 times more, and the second highest of all MTCs in the world. As the Church trains an unprecedented number of new missionaries this summer, groups of several hundred North American missionaries will join missionaries from Central and South America at the Mexico MTC, all preparing to teach about Jesus Christ and the Church in Spanish.

Mexico MTC President Carl Pratt said while the move will be an adjustment, the larger MTC will enable more missionaries serving in Spanish-speaking areas to train together, which will result in more effective training.

At the Church’s 15 missionary training centers, missionaries receive religious instruction and language training and learn teaching skills. They also develop a respect and cultural understanding for the areas and countries where they will serve before traveling to destinations in more than 150 countries.

In the Mexico MTC, which will become the Church’s second-largest training center after the Provo, Utah, MTC, the missionaries who are learning Spanish will train for six weeks; those who already speak Spanish will train for two weeks. The latter group of missionaries will come mostly from Mexico but also from other countries in Central America and South America. After the missionaries complete training, they will serve in Spanish-speaking missions in Central America, South America and the United States.

A record-high 70,000 missionaries are currently serving around the world, and thousands more will be trained at MTCs worldwide this summer. The recent increase in the number of missionaries serving occurred following the lowering of age requirements for mission service, announced by Church President Thomas S. Monson last October.

When the move to the new location was announced in January, Elder Russell M. Nelson said the success of 18-year-old missionaries called from Mexico since 1999 was a significant consideration in the decision to change the missionary age worldwide.

“Thank you, Mexican Saints and families,” Elder Nelson said, “and thank you to the 18-year-old elders from Mexico, who pioneered the change in age.”

Church leaders made the decision to relocate the Mexico MTC after considering every immediate alternative that could alleviate the demand at the Church’s other missionary training centers around the world, including the MTC in Provo, Utah.

In addition to classrooms, the new MTC facility has 50 homes and two large dormitories that will be used to house missionaries. It also includes kitchen, dining and exercise areas. To assist with the high volume of missionaries this summer, about 30 teachers from the Provo MTC will work in Mexico in the coming months for six weeks at a time. Eventually, the Mexico MTC will employ up to 150 part-time teachers, and all will live in the area.

North American missionaries assigned to serve in Mexico will continue to train at the Provo MTC. “If they have a difficult time getting a visa through a consulate or an embassy, that normally has to be done in their home country, so those will be the ones trained in Provo,” President Pratt said.

President Pratt was born in Monterrey, Nuevo Leon, Mexico, and served as president of the Church’s Mexico South Area from 1997 to 2001. He said he’s excited to see the missionaries arrive to train at the new MTC.

“It’s an emotional thing for me to have this happening here, because I was born in Mexico and I’ve always loved it,” he said. “It’s a tremendous privilege and a blessing to be involved in all of this.”

The Church currently operates mission training centers in Mexico City, Mexico; Provo, Utah; and 13 other locations (see list below). All MTCs follow the same standard training curriculum.  Missionaries receive training for either two weeks in their native language or six to eight weeks in a second language.

This is really exciting. I was a missionary in the Southeast Mexican Mission 1962-1964. We had about 200 elders and sisters in the whole mission, which is now part of 9 missions and only 12,000 missionaries world wide. I live in Mexico now and love it and am so excited to see the advances the church has made, not only in numbers, but in blessing the decendants of Father Lehi and those who inhabit this great country. God is truly mindful of his saints here and is blessing them abundantly with the fruits of the gospel. My wife's family now has five generations of active members of the church. We can only go forward. God bless us one and all. Jim Kinsey