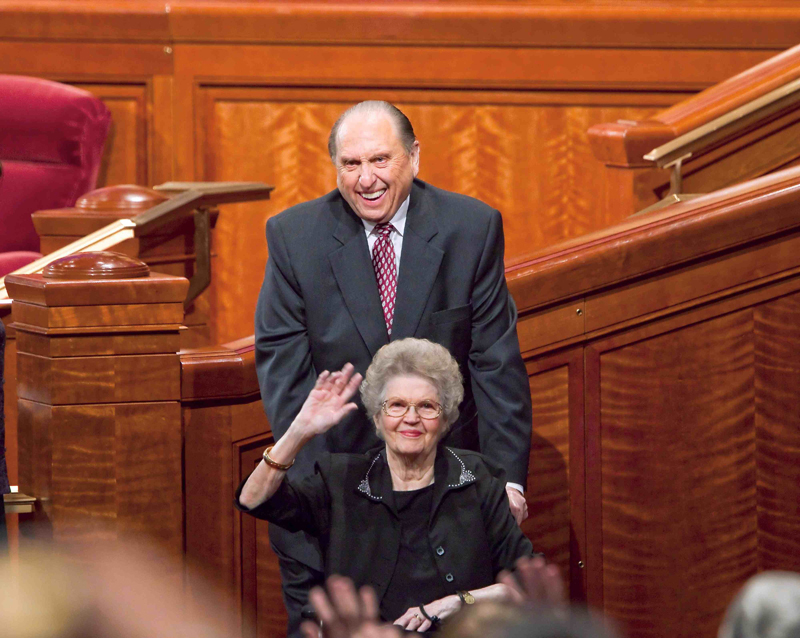 Frances B. Monson, wife of Thomas S. Monson, President of The Church of Jesus Christ of Latter-day Saints, passed away at 6:35 a.m. this morning in a Salt Lake City hospital surrounded by family. She had been hospitalized for several weeks and passed away peacefully of causes incident to age. Sister Monson was 86 years old. Funeral arrangements are pending.

Recognized by her husband as the family’s beacon of love, compassion and encouragement, Sister Monson lived a Christ-centered life in word and deed. She will forever be remembered for her kindness and quiet, sustained support of her husband in his Church duties.

Born on 27 October 1927, Frances Beverly Johnson was the youngest and only daughter of Franz E. Johnson and Hildur Booth Johnson’s five children. Her parents were delighted to have a little girl in the family whom they promptly named Frances, after her father Franz.

She grew up in Salt Lake City, Utah as a child of the Great Depression where she learned the value of hard work and thrift, which served her well throughout her life. She graduated from East High School and the University of Utah where she excelled in math and science. When asked why she enrolled in these difficult classes she replied with a twinkle in her eye, “… because that is where all the cute boys were.” Frances was also an accomplished pianist and was often seen playing tennis in Liberty Park during her teenage years. Later, she worked in the accounting department of a large department store to help pay for her college education.

It was also during her university days she met a handsome, strapping young man also of Swedish descent, Thomas Spencer Monson, at the time known as Tommy. “The first time I met Frances, I knew I’d found the right one,” he would later say about their courtship. They met in 1944 and were married on 7 October 1948 in the Salt Lake Temple.

The couple was blessed with three children: Thomas Lee, Ann Frances and Clark Spencer. The children soon learned that they had a very special mother. She helped her sons learn about, buy and raise Birmingham Roller pigeons, at one point helping her son to travel to England to meet a Birmingham Roller expert. She allowed one son to keep a pet snake in the bathtub. Most mothers would shudder at the word snake, let alone have one in the tub. The herd, gaggle and flock of family pets eventually included chickens, more pigeons, a dog, geese and other animals.

Daughter Ann Dibb said her mother was always good at bookkeeping, budgeting and “being mindful of where the best bargains could be found.” Ann’s mother followed the Church’s provident living advice of thrift and self reliance, making her grocery money go farther by researching and buying items on sale and then storing them at home. Up until recently she continued to read both Salt Lake newspapers looking for coupons and bargains.

She was known as the family assembler and fix-it person. Early every Christmas morning found Frances assembling bikes, toys and doll houses and on other occasions fixing an electrical switch or plumbing leak. Ann said this was something her father readily admitted was her mother’s talent, not his.

She served in the Relief Society and Primary and spent many hours preparing lessons for those callings. She also served alongside her husband when he was called to preside over the Church’s Canadian Mission, headquartered in Toronto, Ontario from 1959 to 1962. Both concur that the mission was a beautiful experience that gave them many opportunities to learn and grow both spiritually and intellectually.

Frances was blessed with an endearing sense of humor, a part of which President Monson shared in a general conference talk: “Several years ago my dear wife went to the hospital. She left a note behind for the children: Dear children, do not let Daddy touch the microwave’ – followed by a comma or the stove, or the dishwasher, or the dryer.’ I’m embarrassed to add any more to that list.” Her recipe for life included plenty of encouragement, kindness, and hard work, with a dose of humor thrown in for good measure.

Most importantly, Frances will be best remembered for the love and support she showed to her husband and family and the service she rendered to others. Ann said, “She dearly loved my father and recognized his talents and the gifts that he’d been given and took pleasure in supporting him and helping him magnify the talents that were his.” She completely supported her husband in all of his Church duties. She also delighted in being a mother continually teaching her children the importance of sacrifice and serving the Lord.

Ann shared a tender example of her mother supporting her father in his Church callings. As a newly-called member of the Quorum of Twelve Apostles, the then Elder Monson was assigned to speak in general priesthood meeting. Frances tried to stand in the doorway of the Salt Lake Tabernacle to listen to her husband speak, but the ushers wouldn’t allow it, so she stood as near to the window as possible to hear the talk. She loved to listen and show her support, and accompanied him many times on the visits to the elderly and those with poor health.

Frances radiated patience and compassion when serving others. She tenderly cared for her mother who suffered from cancer for more than six years. In April of 1988, the Sisters of Charity of St. Joseph’s Villa, an elder-care facility, presented Frances and her husband with the Continuum of Caring Humanitarian Award, honoring both of them for their dedicated and untiring service to the senior citizens of Utah.

Never purposely in the spotlight, Frances Beverly Johnson Monson, was always gracious, kind and supportive in everything she said and did. Her quiet influence felt around the world will be missed.

My heart aches for President Monson, thinking of how he will miss her, and how lonely he'll be even with the millions who love him.

Sister Monson was an amazing lady and will be missed.I have learned so much from President and Sister Monson. My thoughts and prayers goes out to President Monson and his family.