Celebrating Marriage: A Child Speaks Out 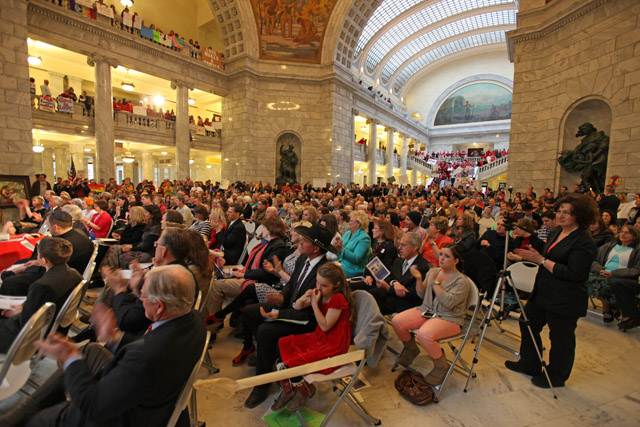 A crowd came to the Utah State Capitol Rotunda Tuesday night to celebrate marriage, marking the first of two days when the U.S. Supreme Court heard its oral arguments on the marriage cases before it concerning Prop. 8 and the Defense of Marriage Act. The theme was “Every child deserves a mom and a dad.” Similar celebrations were held in other states across the country.

An equal number of protestors wearing red t-shirts with “=” signs and placards filled the stairs of the capitol and hung over the hallways above the floor, often chanting.

The program was emceed by Alan and Suzanne Osmond with Governor Gary R. Herbert addressing the crowd. 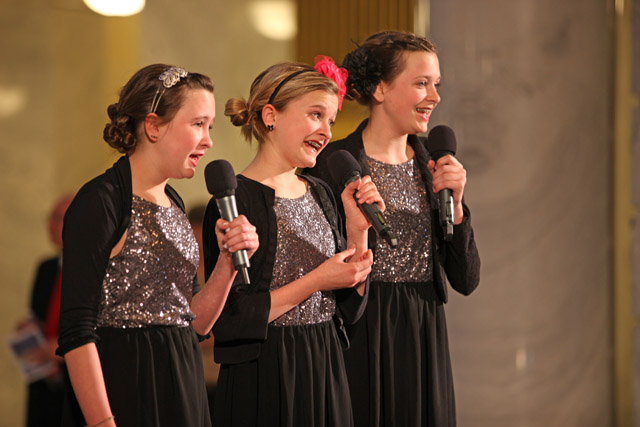 Speakers included various religious leaders and politicians with entertainment provided by family groups like “The Osmond Girls”, a third generation Osmond singing group. We’ve included several of the talks in today’s features, but here we quote the words of 13-year-old Amelia Summerhays, who captured a child’s point of view with a touch of humor: 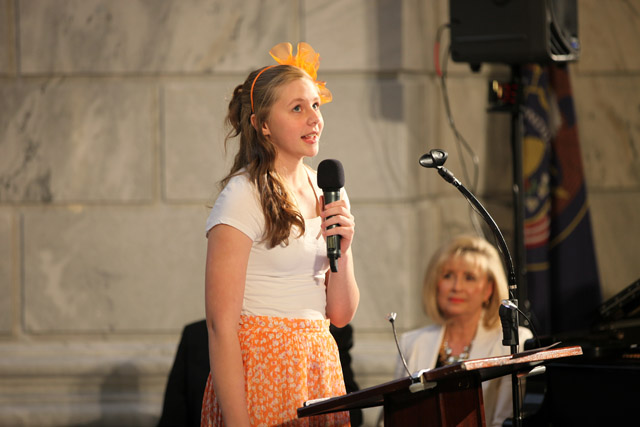 “As a thirteen-year-old, I’ve got it all figured out why I need a mom and a dad. When Mom says no to ice cream, I can go ask Dad. And when I want to invite boys over, Dad says no, so I go ask Mom.

“But really, I’m here to talk about why every child deserves a mom and dad. From my mother, I have a pattern to follow, and I can learn what it means to be a woman. Certain understandings can only happen between a mother and daughter. I would pattern my cooking after my mom’s, but she burned dinner twice last week. Actually, she lit it on fire. She isn’t perfect. No mother is, but in my world, she can’t be replaced.

“My father protects me and helps me to figure out the immature minds of those boys I want to invite over. My dad’s example and advice helps me see the male perspective and brings a balance to my life as a young woman.

“When I was eight or nine, I had a close friend whose parents were getting divorced. She asked me, “If you had to give up one parent, which would you choose?” I could not decide. My mom and dad both have their strengths and weaknesses, but when it comes down to it, I need both parents.

“As a thirteen-year-old, it’s funny to watch adults fight about this issue. Sometimes adults act like selfish children. Most of what I hear in the current debate about marriage is all about adults rights. I’ve noticed that children’s rights are often ignored. Children are defenseless, so shouldn’t they be the main focus in this debate? When we favor the wants of consenting adults over the needs of children, who cannot consent, something is very wrong.

“In my US history class, studying Thomas Jefferson was sometimes difficult. He was always talking about “inalienable rights” and saying things like “we hold these truths to be self-evident.” It took m e a couple of tries, but I think I get it now. Here’s why:

“On the day I was born, I automatically had a relationship with my mother and father. I’ve heard that my mom was exhausted but still insisted on holding me close. Dad was bouncing off the walls, calling everyone to tell them the good news. All this, and they had only known me for a matter of seconds. That’s the power of a biological bond. It happens naturally. That’s what self-evident’ means.

“Whether you call it nature or God, each of us exists only through a mom and a dad. Every person has that exact same birthright. If ever I was endowed by my Creator with certain unalienable rights,’ this is it-to be born with a mom and dad. Why? Because it is impossible to be born any other way. Traditional marriage is designed to protect this inalienable right given by our Creator. When we redefine marriage, we begin to fight against the inalienable rights of children. Tonight I am here to represent all children, and I would like to say one more thing in our behalf. We hold these truths to be self-evident, it takes a mom and a dad to create a child, so it takes a mom and a dad to raise one.”

Jared, First, I really don't think we should equate people in a committed same sex relationships with thieves nor do I think that allowing homosexuals to legally recognize that they are in a committed relationship is in any way promoting anything goes. I believe that churches like ours and every other should be able to define marriage based on the beliefs of their religion, but I don't think our government has the right to decide who can and who can not marry. I certainly do want the government telling me who I can or can not love. I understand that the fear is that religious leaders will be forced to perform homosexual marriages, but at least for now that is just a fear. I would gladly stand up and fight for our right as a church to define marriage as being between a man and a woman, but not or government. I know that is approaching mucky gray waters, but I just don't think we can be the land of the free and see everything as black or white. What I was trying to say about children comes down to the old mote and beam analogy. I just don't think we can point a finger at others when we are so far from perfect. I think we all need to protect the children in our country so they can all grow up safe and happy. If I were to make a list of things that most concern me about issues that face our children today I just can't say same gender issues would be on my list of concerns. What does concern me is that our children need to learn to be tolerant not just of homosexuals but of everyone who may be perceived as different. Isn't that the very essence of living a Christlike life? Shouldn't that be what we are teaching our children? I have watched my own two children who are disabled melt the hearts of many who at first are unkind to them because of their differences. It is my prayer that we might all seek to learn more so that we can understand each other better; I think we would all find that we are really not all that different.

I am 100% against gay marriage - BUT is an orphan/foster child better off being raised by a LOVING (and there are some - I have seen them) homosexual couple who clothe, feed, house and love them - then in the foster care "system" or in a neglected environment (and there are MANY of these! I have seen them, too!) This scenario has bothered me since the very beginning of all this gay marriage stuff! I do NOT have the answer - only the question.....Amelia is so right - IF the mom and dad are "normal and perfect, God loving and family oriented" THAT 100%will not happen on this mortal earth and, at this time, I can only wish for such! (for myslf, also)