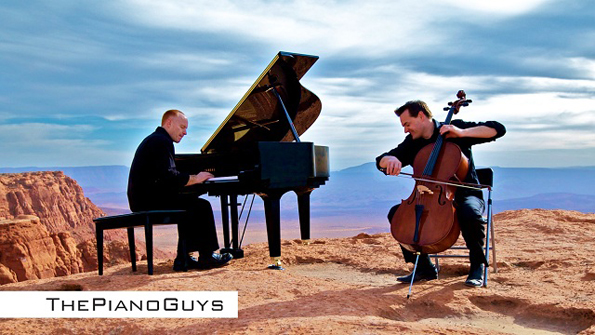 Internet sensations (and Latter-day Saints) John Schmidt (on the piano) and Steven Sharp Nelson (on the cello) have been taking YouTube by storm; their Piano Guys page has, at the time of this writing, nearly 1.5 million subscribers and over 204 million video views. Due to their immense popularity (and their well-received Christmas video for the Church) most Meridian readers need no introduction to this duo. For those of you who are out of the loop, the short version is that they combine classical music with pop, rock, and film scores to create a sound at once timeless and contemporary. It’s literally music teens enjoy as much as their parents and grandparents, if you can imagine such a thing.

I had the pleasure of receiving review copies of the two albums they’ve made together so far: YouTube Hits Vol. 1 and the self-titled The Piano Guys. These CD’s have both been on constant rotation in my little family. My wife enjoys classical, while I’m more of a rock n’ roll kind of guy; we both love the music and simply haven’t tired of it. My six-year-old stepson whines if I try to put in anything other than Piano Guys right now. If this reads like an infomercial, so be it: you can study to this music, exercise to it, jam out to it in the car, and just close your eyes and relax with it.

Though the duo soared to popularity on the strength of their well-produced YouTube videos, their music stands very well on its own. The albums share five excellent songs between them; however, each album also has eight additional tracks which are unique to it.

Both albums contain the following tracks (click on the links to see the music videos): “Michael Meets Mozart” (a mash-up between the stylings of Mozart and Michael Jackson.), “Moonlight” (my favorite of all the tracks, Beethoven with hints of modern espionage), “The Cello Song” (inspired by Bach), “Rolling in the Deep” (combining Gustav Holst with the music of pop artist Adele), and the extremely fun “Cello Wars” (two cellos duel and duet to the various themes from the Star Wars films, supported by a thumping beat that could give the song traction at dance clubs).

YouTube Hits Volume One (2011) also adds the moving “Without You,” the ominous “O Fortuna,” “Bring Him Home” (a lovely piano/cello arrangement of the Les Miserables favorite), a robust take on the “Charlie Brown Melody,” the marvelous mash-up “Rock Meets Rachmaninoff,” the much-beloved piano showcase “All of Me,” and new arrangements of Extreme’s “More Than Words” (blended nicely with “Jesu, Joy of Man’s Desiring”), and the classic childhood “Twinkle Lullaby.”

The Piano Guys (2012) gives us, in addition to the five shared tracks, the stirring “Titanium/Pavane,” the Coldplay/African chant mash-up “Peponi” (which features vocals by the great Alex Boye), the Bourne Identity-inspired “Code Name Vivaldi,” the majestic “Beethoven’s 5 Secrets,” the soothing blend of “Over the Rainbow/Simple Gifts,” the original “Arwen’s Vigil,” a gorgeous instrumental version of Christina Perri’s popular love song “A Thousand Years,” and the inspiring “What Makes You Beautiful.”

For more information about The Piano Guys, and to purchase their music as well as concert tickets, please visit: www.thepianoguys.com.

For more reviews, articles, and fun videos by this author, please visit www.mormonmovieguy.com. Don’t forget to look for my book, 250 Great Movies for Latter-day Families, coming to LDS bookstores in the fall of 2013.

In addition to having great talent, these men are all good members of the church and are not ashamed to share their beliefs. Two of them live in our ward; they are always gracious about sharing their talents, and are two of the funniest guys I know. Three cheers for The Piano Guys!!!

I use them in my elementary music classes. 5 piano guys playing the inside of the piano, shows how to play the piano and inspires more than I could teach- especially when the 1st grade girls start singing "What makes you beautiful". Then there's the "Cello Wars" that gets them hooked, "Me and my Cello", and "Peponi" with Alex Boyee, the list goes on and on...We will soon run out of Cello's to sell. thanks you guys