She’s only 21 and started singing just three years ago, but vocal performance student Rebecca Pedersen has already captured one of opera’s greatest prizes.

Pedersen was recently named one of six winners of the Metropolitan Opera National Council Auditions. It’s the most prestigious opera competition in North America.

“You go through a lot of stress and hardships and things that make you evaluate if you really want an opera career,” Pedersen said. “Now I have a little taste of what it would be like. I realize now that I’ve got a lot of work ahead of me before I can have that career, but I really do want that career.”

In what was her first ever vocal competition, Pedersen became the second youngest winner in the 60-year history of the prestigious event.

“It’s kind of like the super bowl of opera competitions,” said BYU vocal performance assistant professor Darrell Babidge. “The Metropolitan Opera is the biggest opera house in the country, one of the major opera houses in the world. Winning this competition really does mean that the company is invested in them for the future.”

The journey to the Met started off with auditions in Salt Lake, then on to the next round in Denver and then to the New York semi-finals and finals. In the end, it was Pederson finding her way to the winner’s podium out of a field of 1800 contestants. 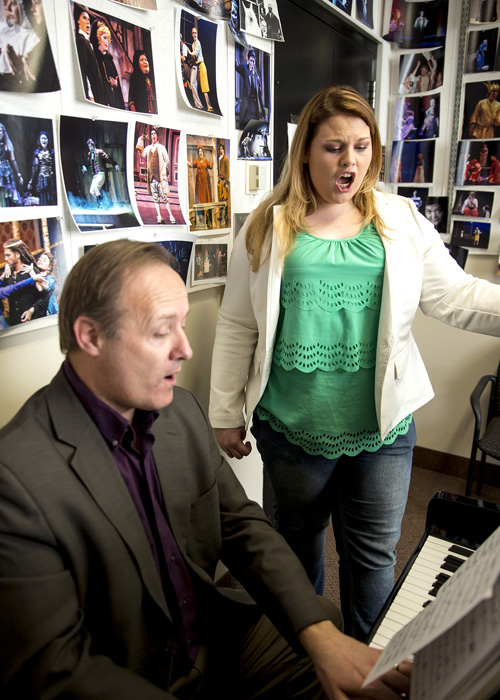 Babidge said the original plan was just to go to the district round and get used to the concept of competition.

“I knew that she could go far, but not that she would have this growth spurt in technique so quickly,” he said. “But every round she brought it to the table, got into the zone and did so well. It was a only a surprise as in it happened so quickly.”

Opera companies swarmed Pedersen immediately after her performance in the semi-finals with offers which would lure her away from her studies at BYU and immediately into an opera career.

“As a singer you dream of the time when you go out and sing and everyone wants you,” Pedersen said.

But still, she plans to continue her studies at BYU through graduation in 2015.

With Pedersen still so new to singing, it’s taken some expert coaching from Babidge and his wife Jennifer Welch-Babidge to get her where she is today.

“When she came to BYU, I knew she had a really great instrument, but there was a lot of polishing to do,” Babidge said. “In the past six months, she’s really come into her own. She’s worked really hard to get to this point.”

Pedersen said she appreciates so much the help she’s received.

The future looks bright for Pedersen. She and Babidge have been in talks with different summer programs, opera companies and even an agent.

“She doesn’t need to rush anything,” Babidge said. “Usually people will do anything just to be heard by one opera company. So many people are interested in her.”

While Pedersen is young and has so much ahead of her, she’s dealt with a lot in her life. She said because of different circumstances she’s faced, she had built up a lot of anger and became closed off to others around her. Her singing may be her ticket to the future, but it’s also been healing for her past.

“I found singing as a release,” Pedersen said. “Ultimately it’s brought me closer to God and been healing. I’m able to share all of myself when I sing. I’m not good at doing that in my relationships, but in singing I can give, and I like that.”

Wow, I cannot imagine going to my very first vocal competition - The MET - and winning it! And yet Rebecca did just that. Brava! Brava!