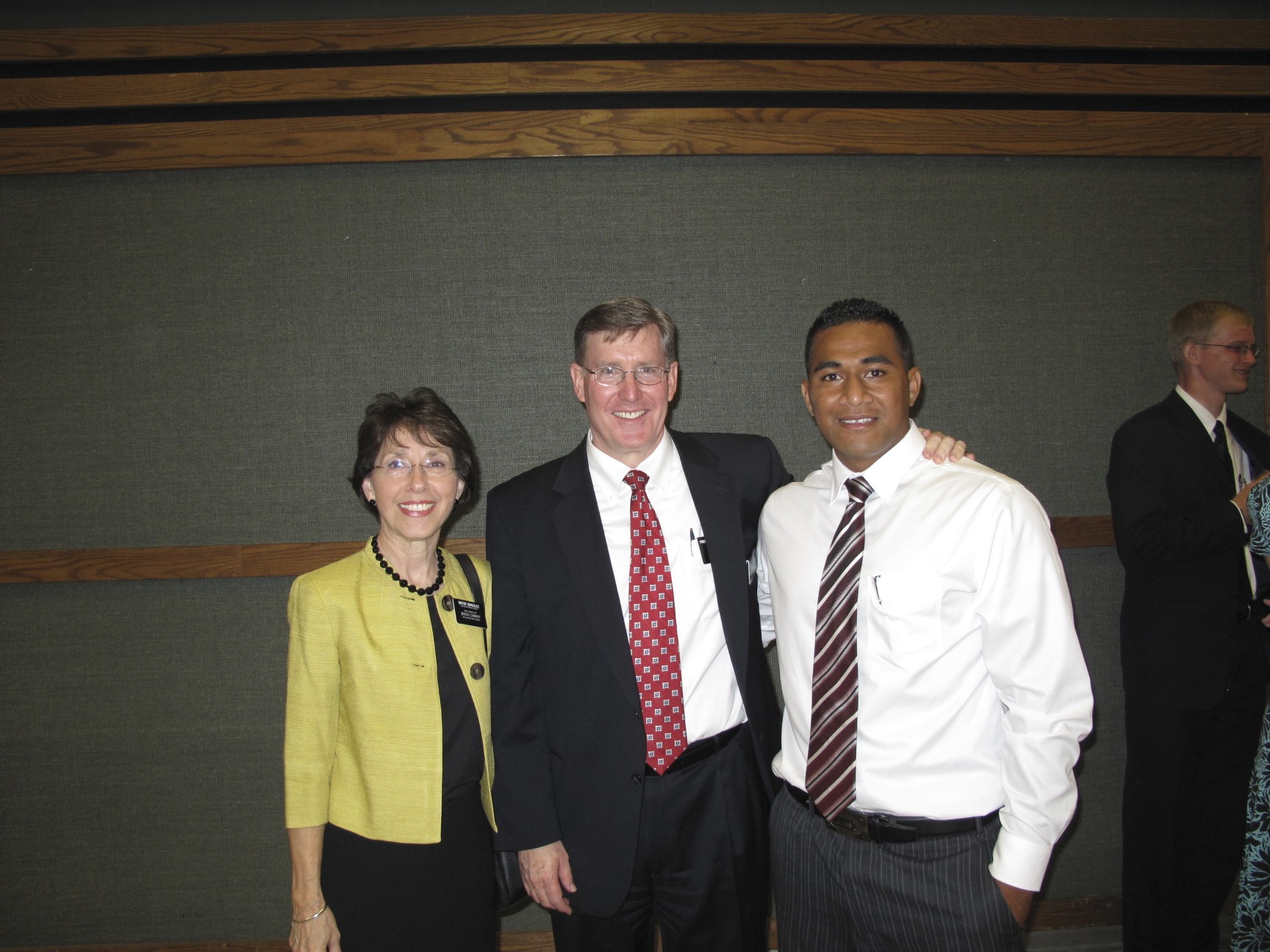 My wife and I were blessed with the privilege of serving a mission together in the California Fresno Mission where I had been called to preside.  We witnessed first-hand the Lord’s intimate involvement in using His servants to accomplish His purposes and to bring the message of the Restoration to His children and enable them to take full advantage of the Atonement.

Our mission was a life changing experience for us and while we have been home now for almost two years, not a day goes by that we don’t express gratitude for the call to serve.  The following experience clearly illustrates that the Lord is in charge of His missionaries and assigns them to their mission field of labor and specifically to areas to work within their assigned missions.

Elder Peter Moala is from Tonga.  He was raised in a Latter-day Saint home of goodly parents and I’m sure he was as excited as any missionary would be when opening his mission call from a prophet.  Elder Moala opened his call letter and learned he was being called to serve in the California Fresno Mission.  He arrived to the mission full of faith and eager to serve.  My predecessor, John Beck, was the mission president when Elder Moala arrived in the mission field with a group of other new missionaries- all full of faith and eager to serve the Lord.

President Beck, going through a process that all mission presidents follow, sought the Lord’s inspiration to know where each new missionary would be assigned within the mission and who would be his/her companion.  This process started with prayer, and continued with prayer, and included looking at each missionary’s photograph on a large transfer board, reviewing pertinent information about the missionary, and pondering each missionary’s strengths, weaknesses, and asking questions like “where can this Elder (or Sister) bless the lives of others?”  It is a process that mission presidents worry and pray about as they carefully contemplate where each missionary should work, who their companion should be, the ward they should be working in, their health, and leadership opportunities.

This “transfer” process occurs every six weeks in the mission field.  And, when all factors are considered and then multiplied by almost 200 missionaries – each with individual needs and talents – this can at times be overwhelming.  Above all else, the most important consideration is the quiet whispering of the Spirit.  It is God who knows where He wants His missionary.  Elder Moala was assigned to work in an area with many prepared to hear the gospel message and he had a great companion who helped train him as they invited everyone with whom they came in contact to “Come Unto Christ.” Elder Moala grew in stature, in confidence, and was very obedient to the mission rules.  He was eventually transferred to another area with another companion and continued enjoying his service as a missionary.  During one particular transfer cycle, President Beck felt impressed to assign Elder Moala to labor in the City of Patterson, California, a town of about 20,000 residents in central California.  Located about an hour south of Stockton along Route 5, it is known as the Apricot Capitol of the World.

Unknown to President Beck – or to Elder Moala – Elder Moala’s sister, Sulieti Lelenoa, lived in Patterson.  Sulieti left Tonga over thirteen years ago, moved to the United States. She eventually met a good man, Josiah, who was not a member of the Church.  They married and began their life together as husband and wife.  She stayed in touch with her family in Tonga, but had not seen them in 13 years. The family did not know where in the U.S. she lived (Tonga being a small island, everyone knows everyone else. They did not have a full grasp on the size of the U.S. and how far Utah (where they thought she was) was from California.)

Sulieti and Josiah were expecting their first child. Naturally excited, they started planning and discussing how they would raise their children.  Religion was discussed.  Sulieti expressed her desire to raise their child in the Church of Jesus Christ of Latter-day Saints, the faith of her upbringing.  Her husband, not a member of the Church, wanted to raise their child in his faith tradition.  Whenever they discussed religion, they never came to an agreement.  Sulieti must have been pressing her husband because at one point in their discussion regarding religion, because her husband stated, “Sulieti, I’ll join your church when your brother knocks on our door!”  Obviously her husband was aware that Sulieti had a younger brother who would be of missionary age, but he must have felt confident regarding the unlikely chance of her brother showing up in Patterson.

On Thanksgiving Day in November 2007, Elder Moala and his companion, Elder Adams, having no other immediate appointments, began knocking on doors in a neighborhood of the City of Patterson.   When they knocked on her front door, Sulieti opened the door and saw the two missionaries standing in front of her.  She looked at a familiar face, saw the name tag, dropped what she had in her hands and immediately rushed to hug a younger brother she had not seen since he was nine years old!

Elder Adams stood in shock as he saw this unknown woman hug his companion!  The missionaries were invited in and returned regularly as they taught the restored gospel anew to Elder Moala’s sister and to her husband who agreed to be taught.  Sulieti’s husband felt the Spirit confirm the truthfulness of the gospel message and he was baptized and confirmed a member of the Church.

When my wife and I arrived in Fresno we met with all the missionaries to introduce ourselves.  We learned of Elder Moala’s wonderful experience in teaching his sister and her husband.  We were grateful to have followed President and Sister Beck in the mission and quickly recognized their inspired leadership in establishing a mission culture of obedience with over one hundred missionaries just like Elder Moala.

One day while working with the missionaries, I received a phone call from Sulieti.  She introduced herself on the phone to me as Elder Moala’s sister.  She mentioned that her husband had been a member now for a year and that they were planning to be sealed in the Oakland California Temple.  She asked if Elder Moala and Elder Adams could attend their sealing.  With many “transfers” having occurred since that knock on the door on Thanksgiving Day, neither now served in Patterson, and were at opposite ends of the mission with different companions.  Another factor was that Oakland was not within the mission boundaries.  After communicating with the Missionary Department, special permission was given to allow both Elder Moala and Elder Adams travel to Oakland where they were able to witness Josiah, Sulieti, and their baby son, sealed together as an eternal family.

Is the Lord’s aware of us and He is involved in the assignment of missionaries?  I know that He is!  The Lord directed the calling of Elder Moala to the United States, to the California Fresno Mission, and to City of Patterson.  The missionaries were obedient to the Spirit and inspired as to which neighborhood to visit.  Such is the importance of serving a full-time mission and following the Spirit in all that we do and say.  As we are taught in Alma 16:16, “The Lord did pour out his Spirit …to prepare the minds of the children of men, to prepare their hearts to receive the Word which should be taught among them…that they might not be hardened against the word, that they might not be unbelieving…”  It was abundantly evident to our entire mission that the Lord has poured out his spirit on this sweet family and softened their hearts to prepare them to hear the gospel.

The statistical possibilities of this divine rendezvous occurring in Patterson are amazing.  Assuming the family knew their daughter was living somewhere in California, the odds were still well over 1 in 300,000,000 that Peter would be assigned from Tonga to the very town and street where his missing sister was living.  It was also a tender mercy that the elders knocked on Sulieti’s door when she was at home, and following Josiah’s declaration  regarding when he would ever join the Church.

This true experience has, as Elder Gerald Lund calls it, God’s divine signature written upon it, for this mission call and transfer were both clearly orchestrated in heaven, not by man.  We shared this story with each arriving group of new missionaries, as divine evidence that God knows each missionary and that their assignments were divinely inspired by a Prophet of God.

Thank you for sharing. I, too, was baptized in California Fresno Mission. It has been 50 years since a dear friend, Lawrence Page, baptized me. What a blessing the Gospel of Jesus Christ has been in my life.

Thank you President Gonzalez for all you do and for sharing this wonderful account.