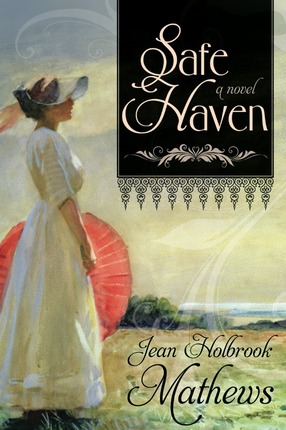 Safe Haven is the newest historical novel by Jean Holbrook Mathews. It begins in England with the death of Susanna Thayer’s father. His death leaves his wife and two children still living at home with no means of supporting themselves. They sell their furniture and finally their home in order to eat. Susanna’s mother and little brother go to live with an older brother who is just beginning his law practice and has a tiny apartment over his office. Susanna accepts employment at a textile mill far from home when her engagement to her childhood friend, Jonathan, is dismissed by his father and he is persuaded to marry a wealthy cousin.

Life at the mill is extremely hard and allows her little freedom, however she learns of a new American religion, attends lectures, and is eventually baptized. She spurns the advances of a man who uses her membership in the Church as an excuse to have her and her friend fired. The two women travel to New York to stay with an elderly aunt until they can arrange passage on a ship that is headed to California where they have been told other members of the Church plan to establish a new community. She learns the situation with her aunt is not as she once thought and Jonathan makes another brief, unhappy appearance in her life.

The ocean voyage around the Horn takes six months and their arrival in California is one of hope and disappointment. Elder Brannon who was the leader of the group aboard the Brooklyn shows more interest in making a fortune than in the church and learning that Brigham Young has no intention of continuing on to California changes many in the group’s expectations. Susanna has to make some serious decisions about her future and decide whether to continue her journey to Salt Lake or remain in California.

The men in Susanna’s life have disappointed her one way or another so many times and each time she thinks she has found a safe haven from fear and poverty, she is disappointed. She doesn’t live in a time when self-reliance is easy or acceptable for a woman. She isn’t certain she can rely on her own ability to support herself or her faith to comfort and sustain her through the trials she faces. She’s a strong and likable character who staggers at times under a too heavy load of disappointment, bereavement, hard work, deceit, loneliness, and fear for her own survival. Discouragement leads her to the brink of giving up. Reviving dreams and daring to hope reveal the strength of her character. She is a character who instills hope and faith in those who read her story. There are other admirable characters in the story, but there are some despicable ones too, ones the reader may feel disappointed not to be a party to their receiving their just deserts.

The book is divided into sections covering each phase of Susanna’s life and journey. The action escalates at an enjoyable pace, drawing the readers into not only the protagonist’s life and the dilemmas she faces, but the historical aspects of that time period as well. It is carefully researched, filled with fascinating details, but never bogs down into the history lecture some historical novels tend to do. Time transitions are handled well and I thoroughly enjoyed the time I spent reading Safe Haven.

This is Jean Holbrook Mathews’s fifth book for the LDS market. She loves history, especially LDS Church history. She taught public administration and state government at the University of Missouri, has served as administrative director for an international foundation, and has traveled extensively. She and her husband served an LDS mission for nearly two years in the Philippines.

SAFE HAVEN by Jean Holbrook Matthews, published by Covenant Communications, soft cover, 276 pages, is available from the BYU Bookstore and Amazon and Kindle.