The largest recorded meteor strike in a century roared over Chelyabinsk, Russia at hypersonic speed, injuring an estimated 1,200 people mostly from broken glass from the tremendous shock wave. The numerous fragments of the meteorite landed over a large mostly uninhabited area creating many small craters.

This event happened just a few hours before the small asteroid 2012 DA14 was tracked by NASA as it passed within 17,200 miles of earth on a highly inclined orbit going from south to north. Its orbit was adjusted by the earth’s gravity in this close flyby from 368 days to 317 days for its next orbit. The asteroid was visible in binoculars and small telescopes in Australia and followed the orbit and timing exactly as predicted by scientists.[1]

Because the orbital trajectory of these two events are so different, the asteroid going from south to north at an almost vertical angle to the plane of the earth’s orbit, and the meteor from north-east to south-west, they are classified by astronomers as independent events. However, the occurrence of two “once in a century” events within a day of each other is certainly very unusual. 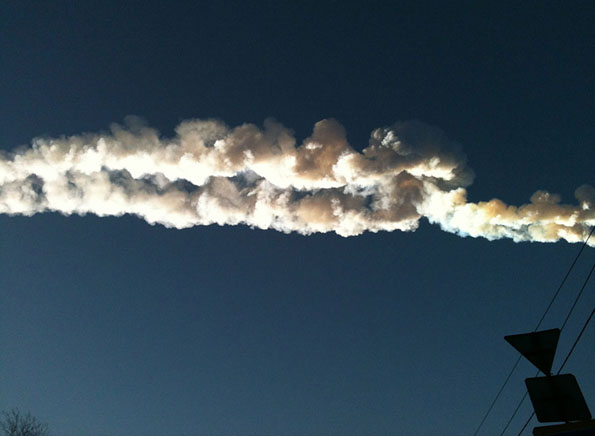 A meteor now estimated to be 55 feet in diameter and weighing 10,000 tons (the weight of a Ticonderoga class Navy Cruiser) streaked across the sky over Chelyabinsk, Russia at a speed of about 40,000 mph. About 1,200 people were injured from the effects of the shock waves, mostly from shattering glass, as the fragments of the meteor zoomed overhead.[2]

Here are some other interesting accounts of the meteor complete with pictures and videos. [3] 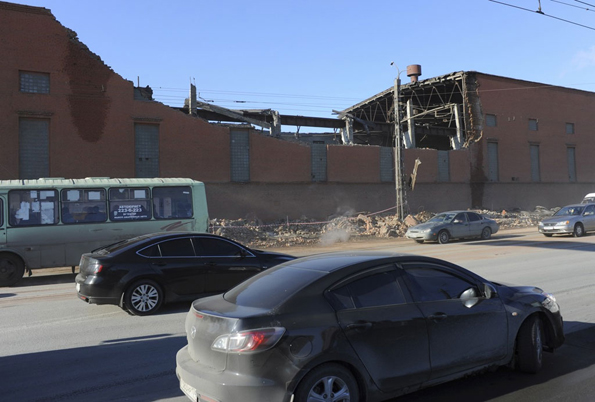 This picture shows damage to a factory from the meteorite in Russia. Even though the main fragments finally landed in remote areas, debris and shock waves caused considerable damage and injuries in the area around Chelyabinsk. Most injuries were from broken glass. With damage like this, it is amazing no one was killed.[4]

It was exciting to tune into the NASA site at noon MST February 15th to see the tracking of the asteroid 2012 DA14 as it crossed earth’s orbital plane exactly as predicted. My article on the asteroid flyby can be read here .[5] 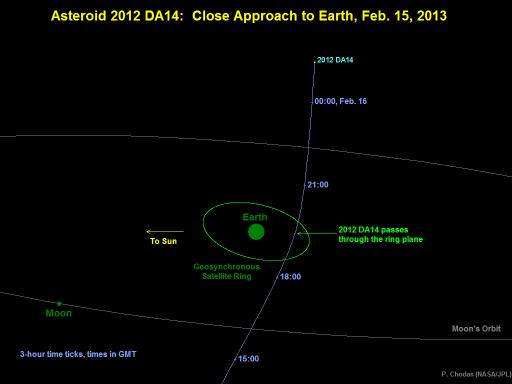 Both of these events were very rare and caught the attention of the worldwide media. The meteor was not discovered and tracked long beforehand as the small asteroid was. The meteor was too small to easily find and track and yet still packed the power of a 500 kiloton bomb. It did not fall into the ocean (six-sevenths of the earth’s surface) nor did it fall in a complete wilderness area as the Tunguska event did in 1908. The meteor streaked close overhead brighter than the sun above a city of over a million inhabitants but did not directly hit the city nor cause any fatalities. Could it be a warning shot across the bow, as it were?

The much larger 150 foot in diameter asteroid 2012 DA14 was the largest asteroid to approach the earth this closely since astronomers have begun to keep track of near earth objects that might impact earth.

Do these two events qualify as signs and wonders from heaven? I visited John Pratt’s calendar spreadsheet and neither February 15 nor February 16 contains any ancient calendar alignments.[7] Yet, many significant events pass without any alignments at all. In a broad sense, very rare and unusual natural events in my opinion may qualify as signs and even more so when multiple rare events coincidentally happen at the same time.

Hopefully, as significant last days signs are sent for our benefit or just as a reminder that “all things denote there is a God,” (Alma 30:44) we will not become as the Nephites shortly after the birth of Christ.

This account in the Doctrine and Covenants seems to me to indicate that the Lord takes responsibility for celestial and other events categorized as “signs and wonders” as part of his overall plan for the last days to bring about man’s salvation and eternal life.

“And they shall see signs and wonders, for they shall be shown forth in the heavens above, and in the earth beneath.” (D&C 45:40)

“The meteor, which was about one-third the diameter of asteroid 2012 DA14, was brighter than the sun. Its trail was visible for about 30 seconds, so it was a grazing impact through the atmosphere.”

“The small near-Earth asteroid 2012 DA14 will pass very close to the Earth on February 15, 2013, so close that it will pass inside the ring of geosynchronous weather and communications satellites. NASA’s NEO Program Office can accurately predict the asteroid’s path with the observations obtained, and it is therefore known that there is no chance that the asteroid might be on a collision course with the Earth. Nevertheless, the flyby will provide a unique opportunity for researchers to study a near-Earth object up close.

“Asteroid 2012 DA14 will be closest to Earth on February 15, 2013 at about 19:24 GMT (2:24 p.m. EST or 11:24 a.m. PST), when it will be at a distance of about 27,700 kilometers (17,200 miles) above the Earth’s surface. This is so close that the asteroid will actually pass inside the ring of geosynchronous satellites, which is located about 35,800 kilometers (22,200 miles) above the equator, but still well above the vast majority of satellites, including the International Space Station. At its closest, the asteroid will be only about 1/13th of the distance to the Moon. The asteroid will fly by our planet quite rapidly, at a speed of about 7.8 kilometers/second (17,400 miles/hour) in a south-to-north direction with respect to the Earth.”

“As for 2012 DA14, this could be its last close pass. Earth’s gravitational field will significantly alter the asteroid’s orbit around the sun, reducing its orbital period from 368 to 317 days. This will mean most of its orbit will be inside that of Earth’s.”

Note: a meteor in the sky becomes a meteorite when it hits the earth.

“CHELYABINSK, Russia – More than 500 people were injured when a meteorite shot across the sky and exploded over central Russia on Friday, sending fireballs crashing to Earth, shattering windows and damaging buildings. People heading to work in Chelyabinsk heard what sounded like an explosion, saw a bright light and then felt a shockwave according to a Reuters correspondent in the industrial city 950 miles east of Moscow. A fireball blazed across the horizon, leaving a long white trail in its wake which could be seen as far as 125 miles away in Yekaterinburg. Car alarms went off, windows shattered and mobile phone networks were interrupted.”

“Cruisers
Cruisers are modern guided-missile vessels that are used primarily in a battle force role.

“Final numbers may may take time, but some 1,200 people are believed injured in Russia by that object from space.  Most people probably gave the idea little thought until today. Never before have so many people been reported injured by such an extraterrestial visitor.”

“NASA managers, at a teleconference, say the meteor that broke up over Russia had the force of a 300-kiloton bomb, and exploded 12 to 15 miles above the ground. But they had no warning, they said, because they simply don’t have the resources to look for objects that size.

“‘Defending the Earth against tiny asteroids is not currently our goal,’ said Paul Chodas, research scientist in the Near Earth Object Program Office at NASA’s Jet Propulsion Laboratory in Pasadena, Calif. ‘Even DA14 is on the small side. Small objects are very difficult to detect, and therefore defend against.'”

“A meteor streaked through the skies above Russia’s Urals region Friday morning before exploding with a flash and boom that shattered glass in buildings and left about 1,000 people hurt, authorities said. Described by NASA as a ‘tiny asteroid,’ the meteor’s explosion created a blast in central Russia equivalent to 300,000 tons of TNT, the space agency’s officials said Friday, adding that the incident was a once-in-100-years event.”

“About 1,100 injured as meteorite hits Russia with the force of atomic bomb,” Associated Press, February 15, 2013,

“A 10-ton meteor streaked at supersonic speed over Russia’s Ural Mountains on Friday, setting off blasts that injured nearly 1,100 people and frightened countless more. … The meteor — estimated to be about 10 tons and 49 feet wide — entered the Earth’s atmosphere at a hypersonic speed of at least 33,000 mph and shatered into pieces about 18-32 miles above the ground, the Russian Academy of Sciences said in a statement.”