The Work and the Glory Shattering Records | Meridian Magazine

The Work and the Glory Shattering Records 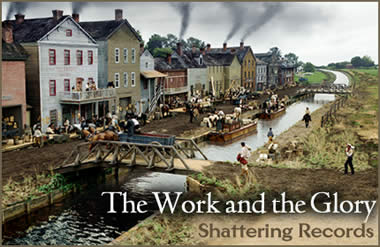 Like a ball rolling downhill, the recently released The Work and the Glory movie continues to gain momentum.  The movie is a wild success – an even greater success than the producers of the movie thought it would be.

In its first twelve days in the theaters, The Work and the Glory pulled in $642,892 at the box office.  This is an amazing feat, considering that such a high percentage of the target audience wouldn’t even consider going to the movies on Sunday.

In fact, The Work and the Glory was ranked 18th in the nation during its opening weekend.  This is unheard of for a movie that is playing on only 32 screens in Utah – which is hardly one of the top media markets in the country.  Despite its limited release, the film grossed more than $200,000 in box office sales its first two days in theaters.

The film’s success should be no surprise to fans of The Work and the Glory series of books, who have stood in long lines to get into the theatres to see the movie again and again.  Theatre owners reported that four tickets to The Work and the Glory were being sold for every ticket that the next most popular movie was selling.

Dale Harvey, general manager at Megaplex 17 at Jordan Commons, said. “We haven’t seen these kinds of sales for an independent film – ever.  We are more than pleased with the response to this film.”

Dean Hale, head of distribution for Excel Entertainment Group, agreed.  “This kind of response is unprecedented for a limited-release, independent film,” he said.  “Unless a film opens in a major market like New York or Los Angeles, it never makes the top twenty.  To do it on a holiday like Thanksgiving made it all the more impressive.”

The success of the movie virtually assures that at least a second film will be produced.  With nine books in the series, there can potentially be nine films based on Gerald N. Lund’s popular characters.

If there’s one person who is probably not surprised by the success of The Work and the Glory movie, that person is author Gerald N. Lund himself.  Elder Lund, whose interest lay in writing books set in New Testament times, was approached by a businessman and convert to the Church, Kenneth Ingalls (Kim) Moe, who asked him to write the story of the restoration of the Gospel.

Even though Kim offered to pay Elder Lund’s expenses, including the hiring of a research assistant to help Elder Lund get the historical accuracy that was needed, Elder Lund was not convinced until he took the matter to the Lord in prayer.  He took a day off work and, fasting, drove up a canyon near Bountiful to consult with the Lord.  He got a response that he should, indeed, devote himself to the project, so he put his reservations aside and never looked back.  If the Lord wanted him to write the books, Elder Lund knew that the destiny of the project was in His hands.

Elder Lund has two dreams for his Work and the Glory series.  First, he hopes that the first film will make enough money to justify that the others be made.  This wish, at least, is on the way to being realized.

His second wish is that the movies that are made of his books will appeal to LDS readers and non-LDS readers alike.  If The Work and the Glory can be a missionary tool as well as a tool that helps Church members develop a love of church history, his fondest dreams for the books will come true.

Elder Lund is currently serving as a General Authority in the Europe West Area Presidency of the LDS Church. He was able to go to Utah for the premiere of his movie, and he enjoyed it immensely. He talked to the press about the film when he was in the United States for October conference.

He said that seeing his book go through the process of becoming a movie was a lifelong dream for him, because he has been a movie fan all his life.  “I’ve always liked to believe that I write cinematically,” he said, “but I believe the cinema really is the ideal format for this story.  It was written with a film in mind, believe it or not.” 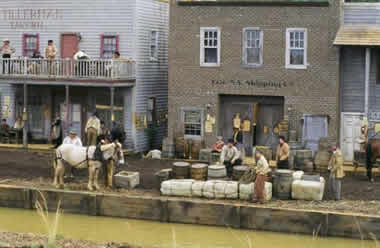 The Erie Canal looks as muddy in the movie production as it must have looked in the days of Joseph Smith.

One thing that made it possible for Elder Lund to walk away from the process before it was finished was that he “trusted Scott [Swofford, the producer] and Russ [Holt, the screenwriter and director] to do the story justice. Their passion for it was quite obvious to me from the beginning.”  He said that the staff went to such a level of detail that when Elder Lund walked inside the store in the movie set, he pulled open a drawer and discovered documents bearing the signature of one of his fictional characters.  This was not something the movie needed; rather, it was something that made the fictional world as real as possible for the men and women who were recreating the book for the big screen.

“They went to that kind of detail,” Elder Lund said.  “It was just very impressive.”

An outdoor scene is revealed as an indoor set in the production of The Work and the Glory.

Pillar of Light, which is the first volume in The Work and the Glory series, and the book on which the movie was based, was written to tell the story of how the restoration of the Gospel affected people in 19th Century America.

“The story was first told in one-room cabins and along country roads, not in presidential palaces or the halls of Congress,” wrote Elder Lund in the preface of that first book. “It was farmers and their frontier wives who first heard of Joseph’s vision and picked up the challenge to accept it and carry its message forth to the world.”

It was Elder Lund’s vision to speak for those long-dead people.  “How did these simple, honest people react? What did they think?  How did they feel?  The answers to these questions are not easy.  Joseph Smith was like a great stone in a river, splitting the waters that come against it.  Some who come in contact with him burned with testimony, others burned with fury.  Some were so moved that they forsook all – families, farms, and, in some cases, their lives.  Others were so moved to scorn and hatred that in some instances they resorted to murder.  It is this story – the story of individuals and families pushed up against a man and his claims to heavenly revelation” that the first book in the series, and the movie, tells.

The task that Elder Lund set for himself was to help modern Latter-day Saints put themselves in the shoes of his characters.  “Many modern Latter-day Saints are second- and third- and, in some cases, sixth- and seventh- generation Mormons,” he wrote.  “Belief in the Restoration is as natural to them as speaking their native language.  But many have quietly wondered, If I had been living back then, how would I have reacted? What would I have done?  Would I have believed? Pillar of Light is an attempt to answer those questions without seeking to proselyte or defend.  It simply tells the story from the point of view of one who believes Joseph Smith was all that he claimed to be.”

Although The Work and the Glory is a movie that is based on a fictional work, Elder Lund is quick to remind viewers that it is also a work of history.  Although the protagonist Steed family is fictional, the story of the restoration of the Gospel is true.  Another thing that is true is that each of us has to decide for ourselves, just as the individual members of his fictional family had to do, how we feel about Joseph Smith’s life and work – and what his heavenly visitations mean to us as individuals.

“While the Steeds are fictional, the choices they faced, the emotions and conflicts generated by that encounter with Joseph are not fictional – not for them, and not for their children and their children’s children .. To everyone who hears [the Joseph Smith] story, whether at mother’s knee or sitting across the table from two young men with short haircuts and missionary name tags, the question is essentially the same as that faced by the Steeds in 1827: What will be my response to Joseph Smith and his story of a pillar of light?“

Despite the commercial success of the film, theatrical reviews have been lukewarm.  Film critic Eric D. Snider described The Work and the Glory as “overwhelmingly average,” a movie that “teeters dangerously close on the edge of boredom.”  Deseret Morning News reviewer Jeff Vice said the “plotting and a few of the performances are just so-so.”

Utah filmgoers strenuously disagree with the tepid reviews, however.  A viewer poll at www.movieweb.com gave The Work and the Glory 4.7 stars out of a possible five.  And even the professional reviewers raved over the performance of Jonathan Scarfe, who played Joseph Smith in the film.

Snider said Scarfe was “charismatic” and “personable, yet as enigmatic” as Joseph Smith was supposed to have been.  “Even if you don’t believe Joseph Smith was a prophet,” he wrote, “in watching Scarfe’s performance, you can see how others might have.”  Vice said that Scarfe has “big screen presence,” as do a few of the other actors.

As the creator of the book and its fictional characters, Elder Lund, said he was “very, very pleased” with the theatrical production.  A fan of Sam Cardon, Elder Lund was particularly fond of the musical score.  He said the actors were exactly as he envisioned them when he was writing the books, and he couldn’t be more enthusiastic about the cinematography. 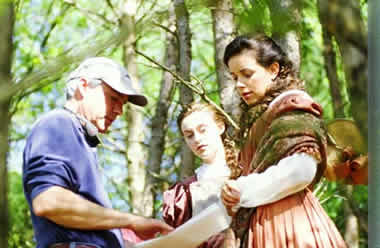 Young actresses receive direction on how to play a scene in the movie.

He, too, was impressed with Scrafe’s performance as Joseph Smith.  “As he talks, it really works for me,” he explained.  “You just feel his agony in trying to let people know” about his experiences with God and Jesus Christ and the Angel Moroni.

Elder Lund was fascinated with the way the Joseph Smith character told his story to others.  “‘Look, I know what you’re going to say when I tell you this,'” he quoted.  “I’ve watched that about 10 times now. I really love that.”