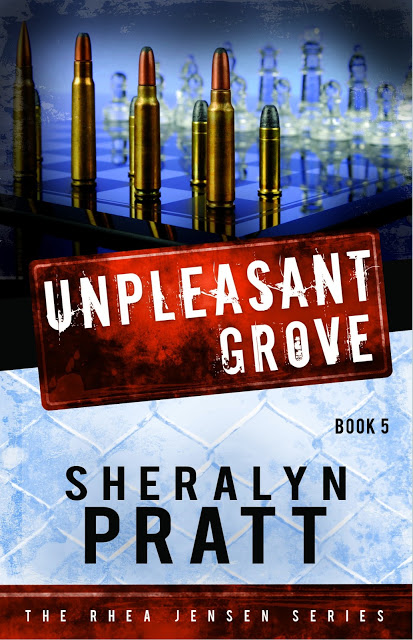 Rhea Jensen is lying low. Though a highly skilled private investigator, she isn’t taking any cases. She’s called a break in her relationship with Ty, her fianc. She’s miserable and it’s all because she’s waiting on repercussions from breaking her arrangement with the syndicate that trained her and thinks they own her. She knows they’re capable of killing her or destroying the lives of those she loves such as Ty, her best friend, Kay, or her father back in California. So Sheralyn Pratt sets the stage for her latest mystery novel, Unpleasant Grove, starring Rhea Jensen.

Kay, a flamboyant television reporter, persuades Rhea to act as her intern in investigating a murder no one seems too concerned about, which gives her something to do, but she feels her hands are tied since she can’t use any of the resources she’s been trained to use in solving a case.

The dead man was the presumed killer in the death of a Pleasant Grove woman, a murder that was never resolved due to a lack of evidence. The assumption doesn’t ring true for Rhea and she has reason to believe the lead detective is lying about certain evidence. The harder she pursues finding who killed the murdered man the more convinced she is that his death is linked to the murder of the Pleasant Grove woman and he didn’t kill her.

The discovery of someone spying on Rhea brings Ty back into an active role in her life. He’s determined they’re still getting married while she’s afraid of what the syndicate will do to him if she doesn’t keep him away. A little reverse spying convinces her the spy isn’t acting alone, but is part of a larger ring. That’s all she needs; two syndicates out to get her.

Rhea is an interesting character. She adheres to a strong set of personal ethics, but easily tosses aside any ethical questions that interfere with getting the job done. She’s highly offended by the syndicate using any and all means to obtain their goals, but does the same in obtaining hers. She’s quirky, tough, brilliant, physically strong, loyal, yet has a softer feminine side. Ty is a good match for her. He’s a physical fitness instructor and is almost as devious as she is when it comes to achieving what he believes is right.

Pratt keeps the tension high through all of the Rhea Jensen books, but there are a couple of slow spots in this one where Rhea is doing more thinking than doing and where the romance elements take a stronger position than the mystery. She is a stronger mystery/action writer than romance writer, but these few slowdowns aren’t really detrimental to the story. The author uses a large amount of technological gadgetry that may leave readers thinking, “Wow! Is that really possible?” The overall plot arc in Unpleasant Grove builds effectively and makes for a more than satisfactory read.

Sheralyn Pratt has tried her hand at a wide array of jobs. She has worked in musical theater, been a karate instructor, a freelance writer, private investigator, a traveler, and has always been a part of the publishing industry. She currently lives in Salt Lake City, but considering this year’s winter, she’s considering changing that.