One Thing, One Word and One Year

It’s been two weeks since my last article, “Ring Out Wild Bells to a Healthier Year“, where I shared my thought that most of us overestimate what we can do in one day, and underestimate what we can do in one year. I encouraged you to have a special “just for you,” new 2013 calendar and set of small reward stickers for healthy living and progress this year. Then to choose just one (and I really mean JUST ONE) small thing to do health-wise each day to mark with a sticker.

Got your calendar? Got your stickers? It’s not too late! Whether you do or not, the year will pass. If you do, how exciting it will be to look back in January of 2014 at not only a calendar filled with stars, but on a year where you did “one small thing” enough times to make a BIG difference. If it sounds juvenile, there are very few of us who don’t need something fun and bright in our lives, along with a way to visually measure our efforts and achievements. Of course you can always mark your regular calendar with a penciled in notation of your choice each day.

Brookie Dickerson, a Meridian reader from Arizona wrote to tell me that it was just what she needed: “My one small thing is to spend 20 minutes a day on my treadmill. Although it’s just been a few days, more than once I found myself putting it off and then remembered I wouldn’t get a star if I didn’t just DO IT! I’m determined that by the end of the year, I’ll have a calendar full of stars and not only improved health, but this good feeling of accomplishment. Doing this one small thing’ for a sticker is prompting me to spontaneously make other smart choices as well.”

Another reader wrote, “I am now in my 90’s and looking back on my life. Can you imagine the changes I could have made and the things I would have to show for my life if I had adopted this one small thing’ calendar plan many years ago? It’s a keeper!”

My own calendar is where I can see it 1,000 times a day. It’s rewarding indeed to see those stars adding up and knowing that, as President Hinckley says, “The course of our lives is seldom determined by great, life-altering decisions. Our direction is often set by the small, day-to-day choices that chart the track on which we run. This is the substance of our lives – making choices.” (Gordon B. Hinckley, Stand a Little Taller, Page 13). 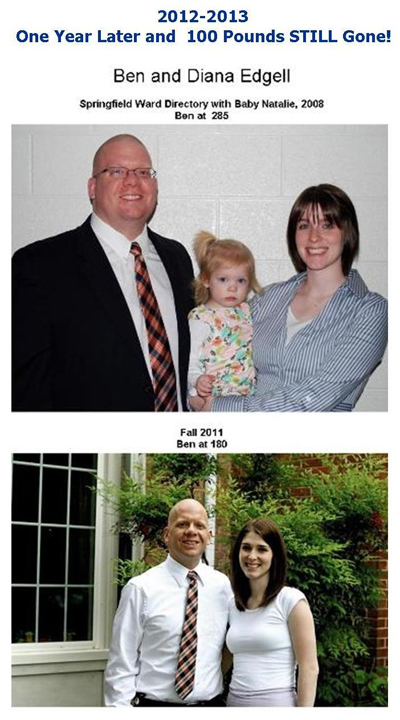 With that, it’s exciting to report on Ben Edgell, who was featured last year on January 11, 2012, (How an LDS Father Lost 100 Pounds  after losing 100 pounds. It was – and still is – an incredible journey both spiritually and physically for him and his wife Diana.

One year later, the weight is still off!

Diana, who became a certified personal trainer during the time Ben was losing the weight, recently taught a class in our Ward’s Relief Society Evening Activity “Living with Purpose”. She introduced the class with Ben’s decision to do just “one small thing” – He walked 10,000 steps with a pedometer provided by his employer in order to get discounts on his insurance. It led to additional choices that eventually led to losing 100 pounds, and led both of them to a lifestyle they will embrace for a lifetime. What a different (and probably longer) life they will have to report to our Heavenly Father at the end based upon the choices they have made.

Diana shares that one year later Ben is even more inclined than she is to find clean, healthy recipes for the family to enjoy. They are still lifting weights and have now built a home gym in their basement where they can work out at home together early each morning. The couple has two pre-school daughters who are learning healthy habits, the importance of exercise and loving the healthy foods that they are growing up with. Diana’s personal business as a certified personal trainer is growing and she is finding great joy in working with seniors who are finding that strength training is the best thing they can do to build their bodies and energy. (You can learn more about them at their blog. Ben and Diana Edgell’s Blog)

Before Ben got started with his weight loss, he spent some time getting his head and heart wrapped around what he needed to do. He wrote a creed that he carried in his heart for several months. It grew, like the seed in Alma 32, until it became more than words, it grew into action.

Today’s plan for those of us who are seeking better health habits in 2013 is easier than writing a personal creed, it’s choosing a personal word. Just one.

In late December, one of my favorite internet authors, an extremely successful life coach for women in business for themselves, posted a blog on why she gave New Year’s resolutions the boot a long time ago. (Christine Kane article and one-word-discovery download e-book) As I read her entry, then her download, I just started to tingle with excitement.

Many years ago, I decided that, instead of making resolutions, I would pick a word that would guide me throughout the year. It would be my touchstone. It would remind me of living my life at the BE level. This didn’t mean that I didn’t take action. It meant that my actions were inspired from the BE level. In fact, I took more action than ever with this new approach!

Here’s the gist of it:

Get quiet over the next few days. And pick a word for the year.

Then, hold that word in your mind throughout the year, and let your word guide you to take action.

For instance, let’s say you are one of the many people who would normally choose “Get Organized” as a resolution. You look around to see clutter and crap all over your life. You’re tired of the chaos. So, you think, “I need to get organized. That should be my Resolution this year.”

But then you read this article. You decide to try it.

You sit with your clutter. You spend a few days pondering words that will inspire you. You realize in an “Ah-Ha!” moment that you tend to cling to lots of things. You’re scared to let go. So you choose the word “Release” because it inspires you in a bigger way than “Get organized.”

So, every time you approach your clutter you remind yourself of that word. “Release,” you say softly. You start to let the clutter go.

You realize that holding on is affecting your diet and health. “Release” applies to some of the extra weight you’ve gained as well.

Throughout the year, you can see clearly how much you hold on. “Release” is your touchstone.

It grows you throughout the year. It becomes your guiding force, not your harsh standard.

Your clutter became your teacher simply because you shifted your intent towards it. This wouldn’t have happened if you’d opted only to “Get Organized.” (The link to the full article and her download for choosing your word is at the bottom).

While she had said it might take several days to know what your “word of the year” would be, mine came almost instantly, in a moment of rare clarity. I know it is inspiration from my Heavenly Father. The word is “order”. As the first two weeks of the new year have passed, it is growing in importance for not only my physical health, but my spiritual health and other aspects of my life as well.

I cherish this principle already, and hope it will be meaningful for you! If you don’t have time to download do the wonderful discovery exercise she has included, just read the article make a simple prayer request. The word will be there, as it is for me.

Once you have your word, simply write it at the top of each calendar page. Easy. Let it guide and inspire your thoughts, actions and attitudes throughout this coming year.

One small thing, one small word, one small year! Say it with me: “If it is to be, it is up to me! So let great things will be in Two-OH!-one three!”

Carolyn’s Herbal Detox – a Great way to start the year off. Excellent for mental clarity as well as cleansing toxins for a healthy, clean start for 2013.
CLICK HERE

Carolyn Allen is the Author of 60 Seconds to Weight Loss Success – One Minute Inspirations to Change Your Thinking, Your Weight and Your Life. She has been providing mental and spiritual approaches for weight loss success both online and in the Washington, DC community since 1999 presenting for Weight Watchers, First Class, Fairfax County Adult Education and other community groups. She is the owner and president at MyMiracleTea.com, an herbal detox tonic in keeping with the Word of Wisdom. She is mother of five and the grandmother of a growing number of delightful grandsons and granddaughters and lives with her husband, Bob, in Springfield Virginia, where she serves as the Visiting Teaching District Supervisor. She has been writing for Meridian since 2007. Her favorite foods are broccoli — lots of it! and chocolate frosting … just a taste every now and then.  Her book is available at both Amazon.com and her website, CLICK HERE