A Time of Forgiving: A Christmas Musical has four performances. The remaining performances are Tues., Dec. 18th at Mountain View High School in Orem, and then Fri. and Sat. evening Dec. 21-22 at Kingsbury Hall in Salt Lake City. Go to the website for ticket information. 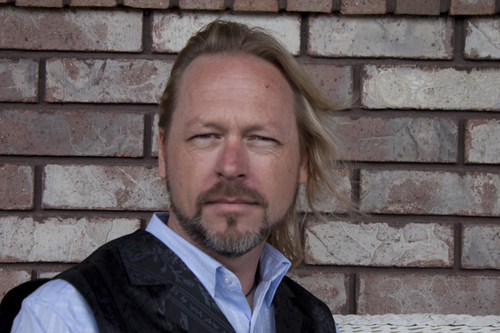 Paul “Cactus Jack” LAMARR is a name like Crocodile Dundee. You just know there is a story there somewhere. There is, and instead of keeping it to himself, the talented musician, singer and writer who calls himself just a “dumb carpenter” from Australia has created a new Christmas musical that he hopes will become a tradition.

Called “A Time of Forgiving”, Cactus wrote the musical to teach that everyone is worth redemption, no matter who they are. He says it’s his life story and more. “A lot of the scenes are based on my life,” he said. “Some of the scenes I’ve changed to protect my family, but what I hope to do is share the danger of prejudgment. We’re all guilty of that in some shape or form.

“This play is also my opportunity to share my testimony, which I don’t often get the chance to do.” Cactus is a Latter-day Saint but with his shaggy hair and beard, to some he may not look the part.

The play begins on Christmas Eve. Joshua and Laura have been married 15 years, and this is a night that has been significant for them. They met on Christmas Eve; they have a daughter who was born on this night, and now 12 hours before the musical begins, they have separated and he is not coming back.

Laura has been able to handle life as long as everybody else thinks that things are perfect, and, indeed, Joshua has been a jerk. By the end of the first act, it seems to the audience that Joshua is not redeemable.

Cactus says, “Remorse is different than guilt. Guilt causes people to hide, blame, avoid and judge. Remorse is taking ownership of what you’ve done, accepting the fact that no matter what you do, you have no right expecting anything from anyone else that you’ve hurt.

He said, “There is integrity in saying, I’ve messed up.’ Remorse requires you to understand that you can’t fix this on your own, and that you need your Savior.”

Cactus tears up as he talks about the creation of his play. “It’s hard to relive this stuff,” he admits. Still, there is nothing down about this play. It’s got magic and travel to the past, and music that is both new takes on old Christmas favorites and originals. Here are a couple of samples:

– Away in a Manger

He is originally from Utah, but he left in 1988 for Australia and didn’t come back until 2007, and for all intents and purposes he seems like an Aussie. Two years ago he had a life-changing moment when he decided he was going to sell everything he owned, come back to Utah and begin to do the thing he always wanted to do-to start his music career. He was self-taught in violin, piano, and guitar.

He hired a cabin in Park City where he could create a music studio with a grand piano, violin and guitar and began composing. Last year on Dec. 1, he visited Deseret Book with his own CD of Christmas songs. They told him it was much too late in the season for him to get into the system, so he said he walked to Temple Square, a place he likes to frequent for inspiration and solace.

Debbie Simmons, an executive there, called him while he was still there with a changed mind after she had listened to his work. “We’ll take 2,000 copies now,” she said. His album “That First Night: A Christmas Collection” jumped to number 1 on the Christmas list and by April he had delivered another CD called “A Carpenter’s Hymns”. He went on a 22-state tour

This gave him the boost to write his Christmas musical with the aim of making it a Christmas tradition. What he hopes is that the product is not the musical, but that life-changing moment in the audience’s seats when they feel the power of a character’s redemption.

To listen to more songs from “A Time of Forgiving: A Christmas Musical” click here.

Just an FYI that Cactus was born in Arkansas and raised in Texas. Cactus Jack's music is sooo beautiful. Thank you for this article!