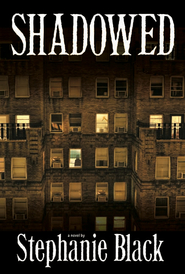 Fans always greet the release of a new book by four-time Whitney Award winner, Stephanie Black, with a flourish of excitement and so it is with her new thriller, Shadowed. Wealthy Catherine Clayton arrives in Riley to begin a free music program for the impoverished community that for economic reasons has had to cancel school music programs. Her first stop is at Flinders Elementary School where her close friend and former roommate, Danielle, is the principal. She finds a squad of police officers, an upset staff, and a badly vandalized school.

It doesn’t take long for one of the school secretaries and several others around town to let her know there was a flurry of vandalism around the town two years earlier which culminated in the murder of one of the school’s employees. Among the first people she meets are two men who are considered the strongest suspects in that murder. She soon finds she can’t avoid the constant speculation concerning the murder or the new round of vandalism and subtle threats.

Soon she finds herself questioning who the murderer might be too. Could it be the dead woman’s former fianc for whom Catherine is also developing strong feelings? Could it be the Romeo the woman had cheated on her fianc to date? Could it be the older secretary who seems to be obsessed with the victim? Could it be the woman’s own brother? There are a lot of suspects and when one of Catherine’s adult students is viciously attacked and almost killed minutes after leaving her studio, Catherine is among those who suspects the student’s jealous, abusive husband. The attack also leaves Catherine and several others wondering if the student was mistaken for Catherine. Yet how could that be when Catherine didn’t even know the victim and had never been to Riley before?

Black’s suspense novels tend to begin with pretty ordinary people doing ordinary things. Catherine isn’t ordinary in the sense that she’s extremely wealthy, but she plays down her wealth and tries to contribute to society as quietly and effectively as possible. As a musician she means only to enhance other’s lives through the gift of music which she can easily afford to share, though there are some who question her motives. She harbors a lot of insecurities and though she grows some in the story she’s never a strong, self-confident woman.

The plot moves slowly, though it does pick up the pace some toward the end. There are some interesting plot twists and Black is superb at providing logical reasons why a large number of people could turn out to be the villain, thus keeping the reader guessing. Many mystery/suspense readers, including me, love to try to guess the villain’s identity as early as the first chapter. I find this difficult in Black’s books, but this time I got it right, which didn’t spoil the book for me, but left me feeling a little smug. This is a book mystery/suspense readers won’t want to miss.

Stephanie Black was born in Utah but has lived in Arizona, Massachusetts, New York, Limerick, Ireland and currently lives in Northern California with her husband and children.