Voices of the Civil War: Evidence and Artifacts | Meridian Magazine

Voices of the Civil War: Evidence and Artifacts

“Our Country, our country – who would have ever of thought – that we would have seen such times.” (Letter from Gavin Drummond Hunt to Mary D. Craig, May 9, 1861)

The L. Tom Perry Special Collections of the Harold B. Lee Library at Brigham Young University has a new exhibition titled Voices of the Civil War: Evidence and Artifacts. The exhibition features highlights from the library’s collection of Civil War materials. Artifacts and documents in the collection show the impact of the war on the nation, on families, on individuals, and on the national culture. 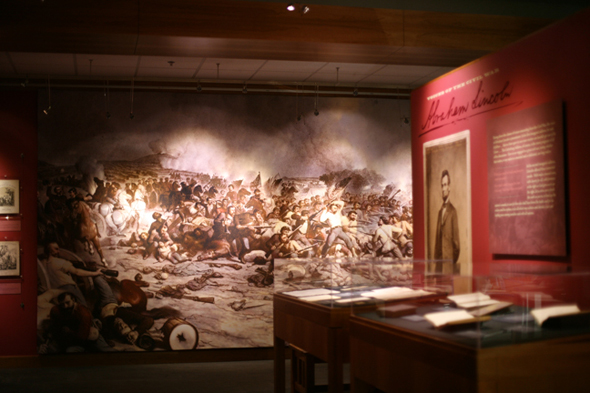 The library’s exhibition opens with documents and publications from the 1850s that anticipated the war such as Orson Pratt’s The Seer published in Washington D.C. and a copy of The Pearl of Great Price published in Liverpool in 1851 and moves onto a copy of the Deseret News from 1861 when, thanks to the Pony Express, news of hostilities reach “Great Salt Lake City.” 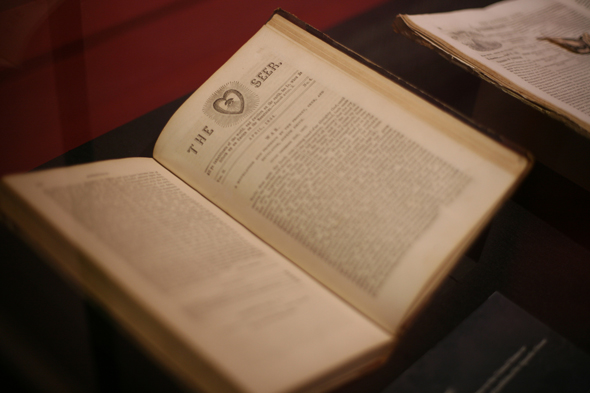 Visitors to the exhibit can read the letters between family members, both those serving in battle and those left behind at home. The handwritten letters between Elizabeth Kane and her husband Thomas Kane tell a much more personal story than the history we read in textbooks. 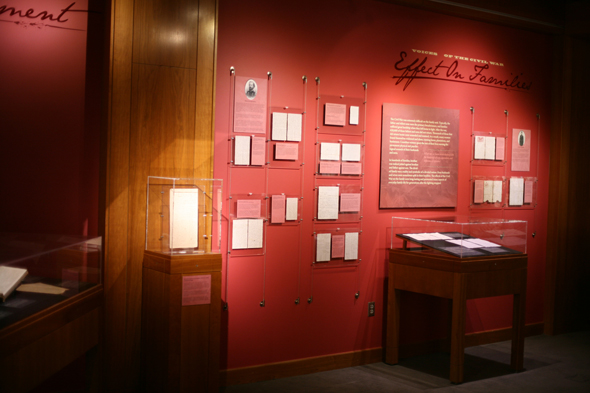 The exhibit also contains items from popular culture produced during the war. Sheet music with patriotic titles line one wall. In another case there are examples of famous works of literature that shaped the thought of the day such as Uncle Tom’s Cabin.

For many people this is as close to history as you can get when you stand inches away from documents from President Abraham Lincoln. You can see the touching pardon he gave to Andrew Ege, Jr., a young man who went away and joined the Confederate Army only to realize he had made a mistake, so he ran away to return home. His father knew that if he joined with the Union Army and he was caught he would be killed. It is believed that when the President learned of his story he issued a pardon for the boy on that same day. In the same case is a copy of the Emancipation Proclamation. 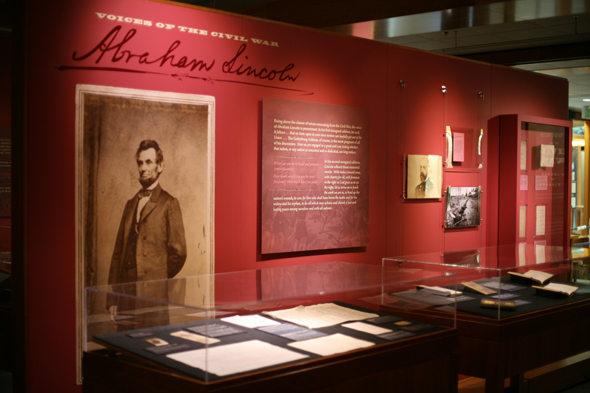 Artifacts from the war on display include a cannon ball, a union belt buckle, coins & paper currency, lanternslides illustrating famous battles, and a travel pass. And most impressive is a vast print of Peter Frederick Rothermel’s painting of Pickett’s charge in the Battle of Gettysburg. Stretching almost from wall to wall, it conveys the drama of battle. It is based on information the artist collected from those who fought. On level three of the library near the entrance there is a small “teaser exhibit” with an full size replica of a Civil War era cannon and the uniform of an artillery soldier. After viewing the cannon and a case with civil war newspapers, visitors are invited to visit the main exhibition on level 1 of the library. 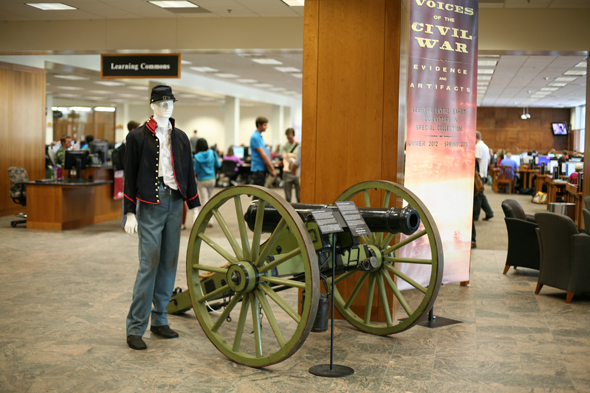 Typically, exhibitions in the L. Tom Perry Special Collections in the Lee Library are the work of one or two curators who team up with faculty members from the various colleges of Brigham Young University. The Civil War: Evidence and Artifacts exhibition differs in that all of the curators in Special Collections had relevant material in their collections they wanted to share with the public. For example, the BYU library holds one of the largest collections of material by Louisa May Alcott. The curator of the collection, Maggie Kopp, knew that Alcott is best known to modern readers for her book Little Women, but Alcott also wrote a significant work on her experiences during the Civil War titled Hospital Sketches. Curator Kopp made sure that book would be on display with other important books of the era.

The exhibition finishes with items that show the lasting impact of the Civil War on American culture. Artifact from famous Hollywood films such as Virginia City, Santa Fe Trail, and of course Gone with the Wind are included. The library holds the Max Steiner collection and visitors to the exhibition can view Steiner’s original pencil score for Gone with the Wind sitting side by side with a 1936 copy of Margaret Mitchell’s novel. Nearby is the battle flag used in the film She Wore a Yellow Ribbon from 1949. This exhibition gives the public a rare opportunity to see all of these items in one location. For their protection, the library will return these items to the safety of the Special Collection vaults at the end of winter semester 2013. 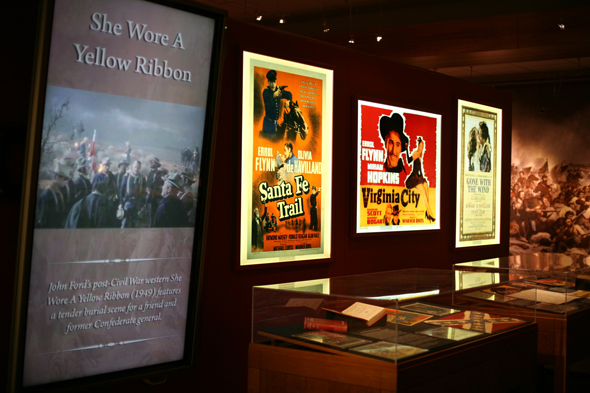 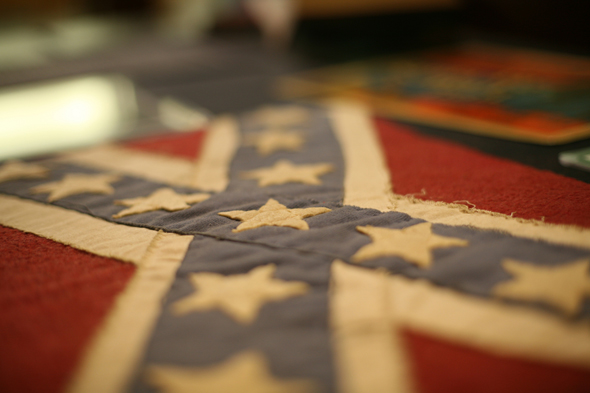 Voices of the Civil War: Evidence and Artifacts is open to the public and admission is free. The exhibition is open during regular Special Collections library hours, Monday through Thursday from 8:00 am to 9:00 pm, Fridays until 6:00 pm, Saturdays from 10:00 am until 6:00 pm. The L. Tom Perry Special Collections are closed on Sundays. For more information on hours and for directions you can visit lib.byu.edu

The library is creating an online version of the exhibition for those who cannot travel to see the original materials. It can be seen at lib.byu.edu