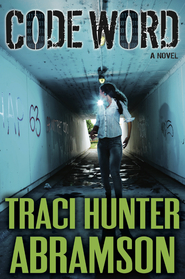 Carina Channing’s life spins out of control once again when the mafia murders her mother and she and her sisters are forced to flee their Denver home. It has been ten years since her mother ran from Chicago and her husband in a desperate effort to protect her daughters from The Family. So Code Word by Traci Hunter Abramson begins, then it jumps two years ahead to Miami where Carina is struggling to keep Gianna in college and Bianca enrolled in a prestigious swim class while working as a buyer for a department store.

Jay Wellman, the newest member of the Saints Squad, a prestigious Navy SEAL team, returns home to visit his parents in Miami following the team’s participation in the shooting of Osama bin Laden. The mission didn’t go quite the way the media reported it and Jay is having difficulty dealing with measures he had to take and his own near-death when the helicopter he rode in crashed. The experience made him acutely aware that he lacks some inner strength the other team members seem to have. Thinking a visit with his parents and a daily work out with his father’s swim team will help him relax and prepare himself to return to the squad, he’s taken by surprise by his instant attraction to the older sister of one of his dad’s students. Unfortunately she’s so focused on protecting her sisters, she’s convinced she has no time for men or dating, but Jay with a little help from Bianca keeps finding ways to get them together.

The entire squad gets involved when the mob locates Carina and she and Bianca must run for their lives.

Jay grows throughout the story as he learns to deal with the trauma he faces early on and gains an understanding of why the other men handle death better than he does and he gains a greater sense of who he is and what he stands for. Carina’s growth is more subtle as she struggles with issues of trust and independence. The plot begins on an intense note, levels off slightly for a brief time, then grows increasingly intense until the final scenes. The author does an excellent job of turning those tiny quiet moments in the story into those expectant moments when the reader knows they’re only the false lulls before the storm.

Having previously worked for the CIA, Abramson must clear her novels with that agency before they’re published, but her first hand knowledge of that organization lends credence to her novels and provides an exciting edge to her suspenseful mysteries. The Saints Squad novels each highlight a different member of a Navy SEAL squad made up of mostly LDS members and have proven to be highly successful with each one dealing with a modern suspenseful threat and each includes a romantic secondary sub plot. Code Word will not disappoint followers of the series and those who haven’t previously read any of the previous books will have no trouble getting into this one or any of the others because they are each a solid stand alone story.

Traci Hunter Abramson has written a dozen novels and has risen rapidly to be recognized as one of LDS fiction’s best mystery/suspense writers with her fans eagerly anticipating each new book. She lives in Virginia and is a former employee of the Central Intelligence Agency. She is married, has four children, and coaches a high school swim team.