Mitt Romney Pledges to Restore the Promise of America 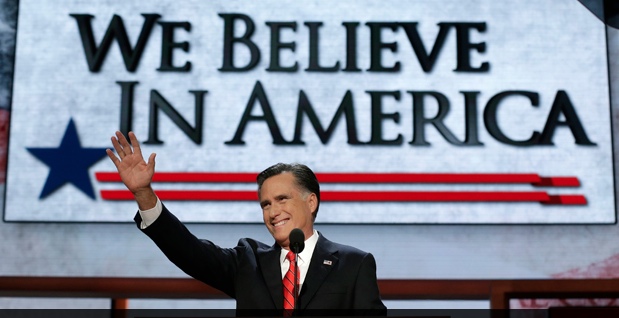 After walking down an aisle where delegates and well-wishers at the Republican National Convention regaled him with handshakes, greetings and hugs, a smiling Mitt Romney ascended the podium and said with some emotion, “I accept your nomination for President of the United States of America.”

It was a history-making night for Latter-day Saints who have never seen one of their own in such a powerful position. The route to get here has seen the LDS Church spotlighted and sometimes misconstrued for the sake of politics, but it also has opened avenues for Latter-day Saints to speak up about who they are. Many of us muse about what a Mormon in the White House might mean from the mundane to the profound. Who will get to be Romney’s home teachers? What will it mean to have a former bishop and stake president guide the nation not only from his desk in the Oval Office but also from his knees?

Mitt with his good deeds to neighbors, his early morning bishopric meetings and his large family is someone whose impulses we comprehend. But apparently everyone doesn’t see him so readily.

Where his critics have called him cold, unconnected with his audience and unlikeable (since they could not call him corrupt or incompetent), Mitt’s job at the convention was to demonstrate that he was someone they could trust, someone with a warm, human side, and most of all someone with the competence to rescue a nation that many see as heading in a disastrously wrong direction.

In his speech, which was interrupted several times with applause and chants of “USA, USA” Mitt appealed to a nation that has seen rough times in the last four years with an emotional pledge that he would restore the promise of America.

In this it seems he succeeded.   Certainly the delegates loved him, but the surest measurement will be if there is a bump in the polls in his direction in the next few days. (According to Reuters: “Romney and Obama have been running close in polls ahead of the election, but the convention so far has given Romney a boost. The latest Reuters/Ipsos online poll showed him moving into a narrow lead over Obama — 44 percent to 42 percent among likely voters. The Republican had entered the week trailing Obama by four percentage points.”).

Pundits called his speech solid, well-delivered and well-received. Fox News’ reporter Chris Wallace said,”There’s an old saying that you campaign in poetry, you govern in prose. I’m not sure it ever soared into poetry . . . but it was a workmanlike job, and it certainly got the job done.”   Though he intended to analyze the speech for its strong and weak points, in the high emotion at the end, with 100,000 balloons and 500 pounds of confetti raining on the auditorium, and a stage filled with Romney family, he said that you see these beautiful grandchildren and an analysis just seems silly.

Michael Reagan tweeted, “When Dad died, we lost America’s cheerleader. Now we have another one.”

Romney came across as someone out to fix things that have been broken, as a patriot who believes in America and its people and as someone who sees the strength of America being in its families, its founding and the God that endowed us with liberties.

Rather than attacking Obama, he said, “I wish President Obama had succeeded because I want America to succeed. But his promises gave way to disappointment and division. This isn’t something we have to accept…”

Romney said that for too many Americans good days are harder to come by than before and gave a litany of things that have changed negatively for us in the last four years-from the price of food to the doubling of gas prices.

“How many days have you woken up feeling that something really special was happening in America? ” he asked.

In an obvious appeal to the swing voters he said, “Many of you felt that way on Election Day four years ago. Hope and Change had a powerful appeal. But tonight I’d ask a simple question: If you felt that excitement when you voted for Barack Obama, shouldn’t you feel that way now that he’s President Obama? You know there’s something wrong with the kind of job he’s done as president when the best feeling you had was the day you voted for him.”

Romney’s appeal was not ideological so much as personal, a reaching out with help and a new plan to those who have suffered in a terrible economy.

He said: “Today, four years from the excitement of the last election, for the first time, the majority of Americans now doubt that our children will have a better future.

“It is not what we were promised.

“Every family in America wanted this to be a time when they could get ahead a little more, put aside a little more for college, do more for their elderly mom who’s living alone now or give a little more to their church or charity.

“Every small business wanted these to be their best years ever, when they could hire more, do more for those who had stuck with them through the hard times, open a new store or sponsor that Little League team.

“Every new college graduate thought they’d have a good job by now, a place of their own, and that they could start paying back some of their loans and build for the future.

“This is when our nation was supposed to start paying down the national debt and rolling back those massive deficits.

“This was the hope and change America voted for.

Why, he said, did we deserve better? Because we are working harder than ever before and getting so much less. We keep holding on because we are Americans and we don’t quit. 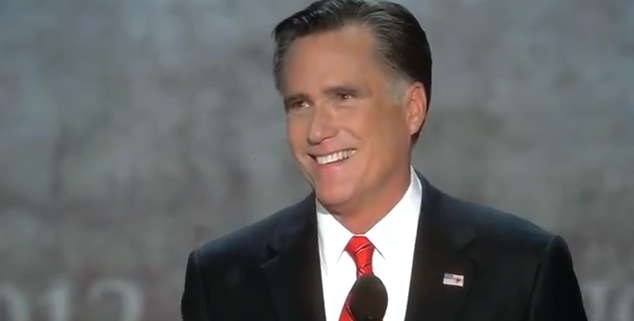 His message that he is a doer who can get things done was portrayed in his history. At 37 he started Bain Capital and from that original group of 10 came some of America’s great companies like Staples and Sports Authority. He was portrayed not only as smart and team-building, but also frugal. In the film that introduced him, a son mentioned that they always went to Mom for money, because Dad watched every penny. It is well-known that when he headed the Olympics, the lunches of the board went from an expensive catered affair to pizza slices they purchased themselves.

Looking to make headway with the constituents he has to have, he appealed to Hispanics and women in his speech.

“My mom and dad were true partners, a life lesson that shaped me by everyday example.

When my mom ran for the Senate, my dad was there for her every step of the way. I can still hear her saying in her beautiful voice, “Why should women have any less say than men, about the great decisions facing our nation?

He also mentioned with emotion the single rose that his father had left every day for his mother on her bedside table. 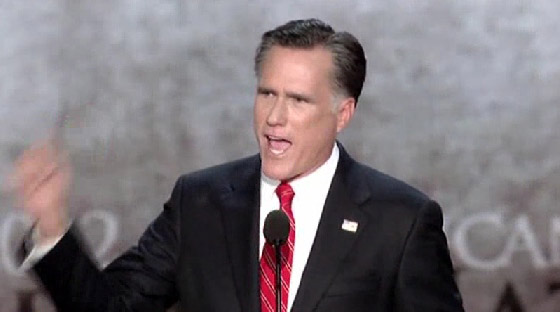 The job of portraying the real Romney was not just left to the candidate. Before his speech a line-up of business colleagues, friends from Church and Olympians spoke in his behalf.

Grant Bennett, a counselor to Mitt, said The Church of Jesus Christ of Latter-day Saints has an unpaid, lay clergy. While raising his family and pursuing his career, Mitt Romney served in our church, devoting 10, 15, even 20 hours a week doing so.

“Like all Mormon leaders, he did so on his own time and at his own expense.

“I was an assistant to Mitt when he was our pastor. As we began working together, Mitt asked, “How early can I call you in the morning?” I said 6 a.m.

“I regret my answer – for several years, Mitt became my alarm clock.

“A typical morning call: “Grant, it’s Mitt. I’m at the airport. Hazel Young tripped last night and bruised her hip — please visit her this evening and give her my love; I’ll arrange for meals and I will visit her on my way home from the airport tomorrow.”

Bennett said, “For one or two evenings each week and several hours every weekend — week after week and year after year — he met with those seeking help with the burdens of real life, burdens we all face at one time or another: unemployment, sickness, financial distress, loneliness.”

“Drawing on the skills and resources of those in our congregation, Mitt provided food and housing, rides to the doctor and companions to sit with those who were ill.

“He shoveled snow and raked leaves for the elderly; he took down tables and swept the floors at church dinners.”

Ted and Pat Oparowski spoke of the tragedy of learning that their 14-year-old son was struck with non-Hodgkins lymphoma, a disease that would take his life. Mitt visited him frequently and David, knowing that Mitt was a Harvard-trained lawyer, asked if Mitt would help him write a will. He wanted to make sure that some of his prized possessions such as his skate board on model rockets went to his best friends.

The Oparowski’s said, “That is a task that no child should ever have to do. But it gave David peace of mind…How many men do you know would take the time out of their busy lives to visit a terminally ill 14-year-old and help him settle his affairs?”

Fellow former ward member Pam Finlayson spoke of her daughter Kate who was born three-and-one-half months early. Because Mitt was her bishop, he was one of the few who could come into the Intensive Care unit. She said, “I will never forget that when he looked down tenderly at my daughter, his eyes filled with tears, and he reached out gently and stroked her tiny back.

“I could tell immediately that he didn’t just see a tangle of plastic and tubes; he saw our beautiful little girl, and he was clearly overcome with compassion for her.”

Mitt gave a five-point plan for his presidency including (1) energy independence by the year 2020, (2) giving citizens the skills they need for the jobs of today and the careers of tomorrow, (3) making trade work by forging new agreements, (4) cutting the deficit and putting America on track for a balanced budget, and (5) championing small business and reducing their taxes.

He said that “a united America can unleash an economy that will put Americans back to work, that will once again lead the world with innovation and productivity, and that will restore every father and mother’s confidence that their children’s future is brighter even than the past.”

That was the optimistic hope that many Americans who have been troubled with the downward tilt or our country needed to hear. It was a good night for Mitt.