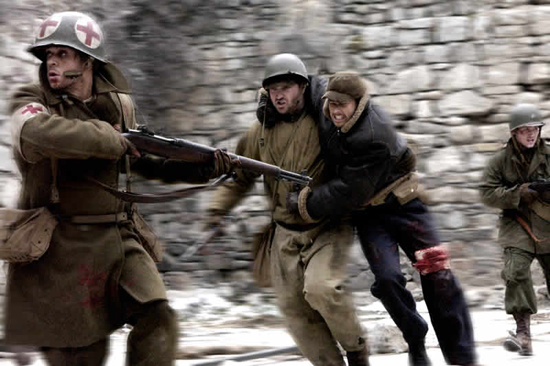 Beginning with the under-seen dance romance Out of Step, director Ryan Little has been establishing himself as one of the premier talents in Mormon Cinema. Two of his films, Saints and Soldiers and Forever Strong, are considered beloved classics by many viewers, boasting excellent production values and fine performances. This weekend Little’s new film, Saints and Soldiers: Airborne Creed, begins its theatrical run. He was kind enough to answer a few of my questions about his new film, his back catalogue, and what motivates his art.

Jonathan Decker: Ryan, I appreciate your time, as I know you’re gearing up for your big premiere. The first Saints and Soldiers is widely regarded as one of the finest examples of Mormon Cinema, though by keeping its themes more broadly Christian it definitely holds wide appeal. Why did you choose to revisit this world?

Ryan Little: I wanted to do another WWII film because it is a great way to honor those who have sacrificed so much for this country and our freedoms.  That is very fulfilling to me.

JD: Is this a direct sequel? Are there any returning characters, or is does the name Saints and Soldiers imply that this is becoming a series of unrelated faith-based war films?

RL: This is not a sequel.  It carries the name Saints and Soldiers so that people know that it belongs to the brand.  The film is a new story about humanity hidden in the depths of war.  Corbin Allred who was in the first Saints and Soldiers is also in this film; however, he is playing a much different character than last time.

JD:  Can you ever see yourself doing a trilogy?

RL: I don’t know.  We will see how this one does.  If people really like it then we will consider doing another.

JD: The first film got very good reviews, was a hit at numerous film festivals, and was a powerful experience for many individuals who’ve seen it. What has been the most meaningful feedback you’ve received on this new film?

RL: We did show Airborne Creed at a festival in LA last month and received both the Grand Jury Award and the Audience Choice Award so that is very promising, but the most meaningful feedback is when a WWII Veteran walks up to you after they see the film and thanks you for telling their story and doing it right.  That means everything to me.

JD: In many faith-based films believers are “saved” and good while unbelievers are worldly and bad. Meanwhile, too often in Hollywood films nonbelievers are portrayed as rational and moral while believers are fanatics, idiots, or hypocrites. Think this gives your films broad appeal. In Forever Strong and Saints and Soldiers, you avoid these false dichotomies. These films do portray, in a matter-of-fact way, individuals whose faith in God is clearly a positive influence on them, their sense of integrity, and how they treat other people. At the same time, characters who aren’t especially religious are still portrayed as decent and human. I think this realism and acknowledgment of universal human virtue and struggle gives your movies broad appeal. What experiences have led to the shaping of this worldview and its manifestation in your art?

RL: I believe that most people are good in nature; they just need an opportunity for others [to be able to] see that.  I think we all come to cross-roads in our lives.  It is the decision we make at that moment that defines who we are.  I like to believe that most people will make the right choice if they really stop to consider what each path has to offer them.  We simply put our characters at those cross-roads and watch to see if they will follow their heart.

JD: Speaking of Forever Strong, I understand that that film has earned quite a following over time. Sports movies are often tired exercises in clich, but that film transcended that, I thought, because of strong characters, its direction, and some truly fine acting. What are some of your favorite memories of that shoot?

RL: I think what makes Forever Strong memorable is not just the story of how we need to be stalwart and strong but how each cast and crew member was effected by hearing that on set each day.  It just became a part of us.  I think we all are better people for working on that film.  It was a real blessing.

JD: A little gem of yours that I think deserves a larger audience is Outlaw Trail: The Treasure of Butch Cassidy, a family-friendly adventure film about Boy Scouts in Utah that, if I may say so, seems to have been inspired by the opening sequence of Indiana Jones and the Last Crusade.  I thought it was great, old-fashioned fun. How did you come to get involved in that project, and why, in your opinion, should more people give it a look?

RL: I have to admit that Raiders of the Lost Ark is my favorite film of all time.  I’m sure that Last Crusade is certainly one of many influences on that film.  No doubt.  When I was given the script to consider it just sounded like a lot of fun. [It seemed like] something that I would watch with my kids.  I love movies that families can enjoy together.  We don’t have enough of those, sadly.

JD: Back to Airborne Creed, what are your hopes for the film and the affect it has on people? What has it come to mean to you?

RL: I really hope that Airborne Creed reminds people about how important it is to honor those that have laid down their lives for our freedom.  There is no greater sacrifice.  If people get that out of this film then I feel like we have succeeded.  Just like Saints and Soldiers, this film is another reminder to me that there is a lot of power in making movies that can make a lasting effect on those that see them. This is one of those films that I believe can inspire people to be better and do better.

Our thanks at Meridian to Ryan for his time and insights. We wish him much success in bringing uplifting movies to our screens. For more from this author please visit <a href="https://www.