Well, what say we kick things right off here with a moral dilemma? It’s the Sabbath Day- quite a nice one, actually, bright blue sky, fluffy white clouds dragging their toes over the Rockies, quaking aspens whispering just beyond the soles of my bare feet, which are up on the rail of the porch, which is my office half the year. Which is where the dilemma begins.

This is the porch where I WORK, no matter what it looks like I’m doing to passersby. (No, I’m not doing anything to passersby, except occasionally waving-read it again, it’ll make sense. It always does.) So it feels like work, it looks like work (to me), and in most measurable ways is exactly the same as work. And it’s Sunday. Hence, the moral dilemma. 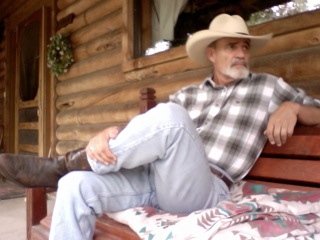 [The Meridian Editors have asked that we include engaging illustrations in our columns. This is the porch under consideration. Thank you.]

But I’m not getting paid. Does that make it okay? Don’t know. Remember, I already mentioned my CD-in-progress. So somebody reads that and says “What CD-in-progress? Can I buy it? Can I pay three times what I paid for all these other CDs that I own? Maybe it’s that new LDS Pop! Why, it’s gotta be, if he’s writing about it on Sunday-maybe I should pay quadruple!” See what I mean? Or the play I’m rehearsing for in the following sentence. I get paid just the same whether you come or not, but what about the increase in fame on account of me mentioning it?

And what about the inevitable (when you were a kid, did you used to think it was “in-uh-VITE-able?” I did-that was back when the great cosmic question came rolling down at me off the Cheerios box like a stone cut from the mountain without hands: “What the heck is riboflavin,’ anyway?”) groundswell write-in campaign that will certainly inundate UVU, with demands like “Dear UVU, y’know how you’re constantly pressuring me to enroll, with all those billboards and signs on the sides of buses and things? Well, hire that one Meridian Columnist with the questionable Sabbath commitment and you’ll have my letter of intent faster than you can say Rah! Rah! Wolverines, Advance’!”

(At a Thanksgiving dinner early in my marriage-stop me if I’ve told you this one before-we were talking about how lame the modern cheerleaders’ exhortations were getting. I mean, “B!” Then the next cheerleader evokes from the crowd a colossal “Y!” Then, yep, everybody yells “U!” Then there’s a big “Yuh!” or “Ugh!” or “Guh!” or something equally visceral before the outburst of free-form encouragement and general affirmation, flavored with a layer of disapprobation for ((of?))the other team. I thereupon shared with the other thanksgivers my den yell from when I was a cub scout and my mother was my den mother. She had attended West High School in Salt Lake City and had taken State in running hurdles ((of course, the only other high schools in the state at that time were East and Granite-which I think is now a charter school for the horticulturally-gifted. Still…)). She taught us this one, with “West High” at the end changed to “Den One.” It rocked. I began, vigorously, “With a vivo, with a vyvo…”

at which point my father-in-law, who had been in the kitchen for some reason, bounded into the dining room and joined in, “With a vivo, vyvo, vum!”

Both of us chanting:

“Johnny get a cat trap bigger than a rat trap!”

“Johnny get a rat trap bigger than a cat trap!”

Since that moment my father-in-law and I have gotten along astoundingly well.)

Oh no-now I’m virtually engaging in raucous and light-hearted battle yells on the Sabbath! Argh! (And now I’m swearing! Where will it end?!)

Wait. A sudden easy reassurance just crept over me that this may be an appropriate Sabbath activity after all. I fell asleep. Not very long, but long enough to assure me of my place in the high priests group. (My wife asked me after church today how my lesson went. I said “Great! Half the brethren were riveted and bold and inquiring and testifying and catharting all over the place!” She asked “What about the other half?””Dead asleep. Peaceful.”)

A gentle summer rain has just begun. That’s a sweet blessing. Am I being blessed for writing kindly about the high priests? That’s an awful lot like getting paid for being religious. More moral dilemma. You’ll remember that King Benjamin put it all in terms of earnings and indebtedness, which doesn’t help me work through this At All.

Okay, here’s what’s at the base of this whole dilemma. What do you do when your daily bread, such as it is, flows from exploring and celebrating the gospel? The CD above? For which I’ll be charging no more than the Grateful Dead charges for their latest? All about redemption, grace, faith, obedience, miracles, hope-mainly hope. The play?All about the restoration of the kingdom. For decades, my job description has read like it came out of the General Handbook of Instructions, and my corporate mission statement is a shameless rip-off of the Thirteenth Article of Faith. President Kimball probably should never have given that one Shakespeare talk, cause hey, that’s where I’m at. Or Consecration. This would all be simpler if I’d never heard of that one.

You write a play. Maybe you get paid, maybe you don’t-but you were supposed to. You write a song-maybe it’s never a hit, but for the price of a 99 cent download, somebody cried or smiled or felt some hope. You conduct a choir, for all the very same reasons you do everything else, and the subject of getting paid never even comes up.

Money just doesn’t happen to be part of that picture, but it’s all the same work- like bearing cryptic testimony monthly in Backstage Graffiti. All the same work. Every now and then, sort of like when the missionaries put on their Levis and play a little touch football on preparation day, you take time off and do a Disney movie or narrate an interminable audiobook about accounting.


Maybe the difference is that today when I did most of my work, I was wearing a tie. I should have worn a tie out here on the porch. I own several (several ties, one porch). I don’t wear a tie for anything else I do, unless the costumer insists that my character would wear one. Maybe that’s it. Maybe I can feel just fine about writing this column on the Sabbath- as long as I bear testimony somewhere in it that I love the Lord and His children and that I’m a believer in the Restoration. But didn’t I say that already? Could you tell that that’s all true? Well of course. Why else would I do this?

Thanks for abiding this introspection. Or vent. Or confession.Or whatever. I feel a lot better about my Sabbath observance. I’m going to go in the house now and watch the Olympics.