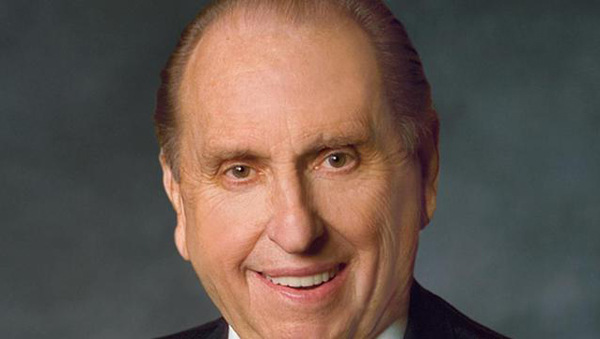 “Golden Days: A Celebration of Life” is the theme of the upcoming 85th birthday celebration for President Monson, to be held at the Conference Center Friday, 17 August, at 8 p.m.

Beloved Broadway selections and other favorites will be performed by guest artists, singer and actor Dallyn Vail Bayles, renowned tenor Stanford Olsen and singer and actress Rebecca Luker with the Mormon Tabernacle Choir and Orchestra at Temple Square.

“We are very pleased that these talented solo artists will be joining the choir to honor this great man,” said choir president Mac Christensen. “I happen to know the songs being performed will delight President Monson.”

Actress and recording artist Rebecca Luker recently starred in the world premiere of Maury Yeston’s Death Takes a Holiday, for which she received an Outer Critics Circle nomination. On Broadway she has appeared in and received Tony nominations for Mary Poppins, The Music Man and Showboat. She also performed in Nine, The Sound of Music, The Secret Garden and The Phantom of the Opera, in addition to appearing on television.

Distinguished American tenor Stanford Olsen, who made his Metropolitan Opera dbut on an hour’s notice as Arturo in I Puritani opposite legendary soprano Dame Joan Sutherland, is one of the world’s outstanding and versatile classical vocalists. His accomplishments in opera, concert, and recital span a career of nearly 30 years at the music world’s highest levels, singing with such opera companies as La Scala, San Francisco, Australian National Opera and Deutsche Oper Berlin.

Dallyn Vail Bayles is a professional actor, singer and recording artist. He most recently performed with the Broadway touring company of The Phantom of the Opera, where he understudied and performed the roles of the Phantom and Raoul. He also performed in China, Korea, Canada and the United States with the Broadway tour of Les Misrables. Bayles portrays Hyrum Smith in the films Joseph Smith: The Prophet of the Restoration and Emma Smith: My Story.

The evening will also take a nostalgic look back at President Monson’s illustrious life from his childhood, marriage, and stint in the Navy during World War II to his decades of service.

All 21,000 tickets have been distributed for the program. Standby tickets for those without tickets will not be issued. However, patrons are invited to stand by for last-minute seating. The standby line will form at the north gate on Temple Square prior to the event.

The program will also be shown at various LDS stake centers over the Church satellite system on Saturday, 18 August, with subsequent rebroadcasts to many areas of the world.

BYUtv International will broadcast the performance in Spanish and Portuguese Saturday, 18 August, at 7 p.m. and Sunday, 19 August, at 8 a.m. and 4:30 p.m. MDT.

KBYU Eleven will air the program on Sunday morning, 19 August, at 7 a.m. MDT.