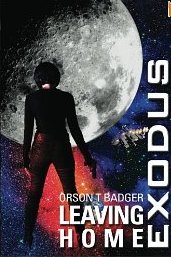 Leaving Home, Vol. 1 of Exodus by Orson T. Badger is a dystopian science fiction novel written to portray the evil that befalls a society that fails to protect freedom. Except for a few hidden sanctuaries the world has fallen under the control of the Enlightened League of Nations, ELN, a small elite group who control every aspect of people’s lives, including education and career choices, sets a strict curfew, and forbids religion, unauthorized books, and any activity not specifically approved by the ELN. Disobedience is punished by immediate death without trial. The elderly and handicapped are routinely executed. A sadistic man, Morstyn, is given unlimited power to torture, execute, and enslave anyone even remotely associated with the small enclaves of people who value freedom or who have religious beliefs.

David and his wife are followed from a secret academy they’ve been attending and must flee for their lives. Their efforts to reach one of the sanctuaries results in their being transported to the dark side of the moon where the Freemen are building a great ark space ship to take people fleeing from the ELN to a distant planet. They have concluded that their only hope for regaining liberty and control of their own lives and to give their children an opportunity to live free lies in leaving earth to pioneer in space in a voyage destined to take more than 800 years. He is an electronic engineer and she is a doctor who are quickly absorbed into the colony where they work hard to further the colony’s goal.

A bionic clone woman, working for the ELN, manages to penetrate the secret colony. She, Miah, is a programmed killer and though neutralized through most of this volume appears set to play a major role in future books in the series. She is responsible for alerting Mostyn to the colony’s existence and the Ark project which in turn sets off numerous strategies to destroy the project which results in a space battle.

This story is set twenty years in the future and for me suspends belief a little too far socially, politically, and scientifically. The Church plays no role whatsoever and I’m sure this is to make the book more appealing to those who don’t subscribe to LDS religious views, but share the author’s conservative political views.

It was hard to feel attached to any of the characters because the story is told from so many points of view and with such a large cast of characters it was difficult to keep them all straight or discern much growth in any of them except David who does become more confident and realizes his lifelong dream of becoming a pilot. The fiction arc works well, but there are long stretches where the story moves very slowly with too much detail that is not really pertinent to the story. There are also many really great action scenes, but some readers may be disturbed by some of the more gory sequences.

Badger was born in Utah, but has lived in several other states and Korea and has worked in various fields. He currently is an architect. This is his first novel. He is married and has four children, three of whom are serving LDS missions.