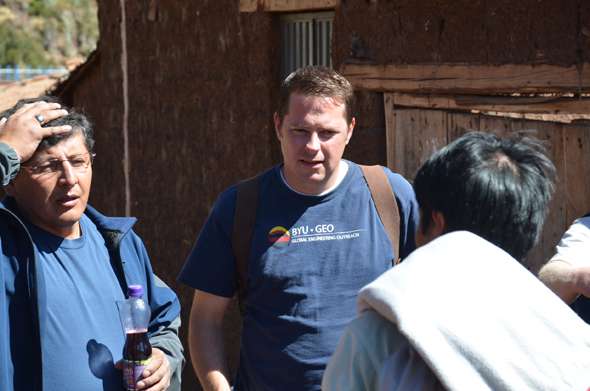 Mattson is part of a select group of researchers across the country awarded this year’s Presidential Early Career Award for Scientists and Engineers. Mattson now joins 2007 honoree Adam Woolley as the only two BYU professors to have received the award.

“I am delighted by this singular recognition of Professor Mattson’s work,” said Academic Vice President Brent Webb. “This award recognizes his strong technical skill and creativity, and the university looks forward to his continued outstanding teaching, student mentoring and scholarship.”

Mattson, a co-director of BYU’s Mechanical Engineering Capstone program, was nominated by the National Science Foundation.

According to a citation accompanying the award, Mattson was nominated for “innovative research to enable product design for sustainable poverty alleviation, and for dedication towards establishing third-world outreach and learning experiences for engineering students.”

Mattson had just completed a 15-day trip to Peru with three students working on NSF-funded research when the announcement was made official by the White House Monday.

“It’s a real honor to have our day-to-day research efforts recognized by the President of the United States,” Mattson said. “This award reminds us of the important impact our research is having.”

The research goal of Mattson’s team is to discover how to best use engineering skills to develop products that help impoverished people lift themselves out of poverty.

Last year, Mattson led a group of engineering students who built a human-powered drill that successfully struck water in Tanzania. To read a story and watch a video about the project click here.

Mattson’s current efforts in Peru include overseeing the work of a bachelor’s student, a master’s student and a Ph.D. Student.