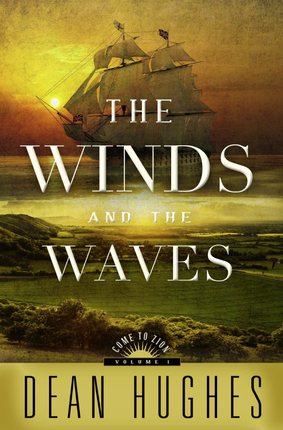 The Winds and the Waves by Dean Hughes is the beginning of a new series by the popular writer which begins in the 1840s, but simultaneously tells the story of the protagonist’s descendant four generations later. Will Lewis is frustrated by the English class system that dictates his life choices forcing him to follow in his father’s footsteps as a poor tenant farmer and placing the young woman he loves beyond his reach. He’s tired, too, of his father’s sanctimonious religious beliefs and the contradictions between the sermons he hears and the reality of his life and prospects. He works hard, especially after his father is injured in an accident. In one small burst of defiance he sets a couple of snares in the forested land adjacent to the small tenet farm, an act that is against the law since only the gentry can claim the game in the commons no matter how hungry and destitute the tenants are. Hoping for a rabbit or other small animal, he is appalled when his snare captures a fawn.

Even a fawn is more meat than his family usually sees in a year, but his father is irate and demands he get rid of it. He buries the animal, but it is too late. He was seen poaching and is evicted from the farm. The squire condescendingly allows his family, parents and six siblings, to stay. He begins a long journey, walking to one of the major cities in hopes of finding factory work. He’s homesick, hungry, and without shelter on the journey which ends with poverty, stench, and a view of the worst behaviors of humankind possible. The factories aren’t hiring and he begins to compare himself to the Prodigal Son found in the scriptures as he realizes the meager meals his mother prepared were far better than what he and thousands of unemployed city dwellers find each day. He not only misses his family, but he can’t get Liz, the young woman he loves off his mind. At last he finds work as a navvy, working long back breaking days building a roadway and tunnels for the railroad. He soon learns that even in this lowest of manual labor, there are those who think they’re better than others. One man sets out to be his friend and Will learns that they share some common views concerning equality. He also learns the other man is not generally liked because employers and other workers assume his views make him part of the union movement that is hated by the upper classes and feared by the workers.

When disaster strikes, leaving Will unable to work, he is fired. Sick and injured, he doesn’t know what to do until a powerful voice tells him to go home. Over and over when he feels too weak to continue, the voice repeats the admonition to go home. He starts the long journey though he is barely conscious most of the time. When he can go no farther, he is taken up in a carriage by a kind couple. Eventually he becomes the couple’s bailiff. He is disappointed to learn his family and Liz have become Mormons. The experiences he’s gone through have brought him closer to God, but he is skeptical of all religion, until he meets Wilford Woodruff and his heart begins to soften.

In contemporary times Abby and Jeff are a young married couple trying to decide what to do when Jeff loses his job and they discover Abby is pregnant. Jeff is offered a place to live by a family friend who bought a house in Nauvoo and needs someone to renovate it. Jeff is a computer programmer who would like to go back to school to get a doctorate in history so he can teach history on a college campus. Abby just wants him to bring in a steady paycheck and to settle down in one place. Jeff loves the history of Nauvoo and feels a connection to his long ago ancestor who lived there before the Saints were expelled from the city.

Hughes is one of the best when it comes to allowing his readers to feel and see what his characters experience. His depictions of the poverty of mid-nineteenth century England and the injustice of laws that kept vast numbers of people living lives lower than that of slaves are shown in heart-breaking detail. The bigotry and violence found on America’s outposts strips away any romantic illusions one might have of that frontier period. Nauvoo is little more than a muddy, disease infested swamp. The people are poor and living in hastily built cabins. The big difference is that the people in Nauvoo have hope and faith. They trust their hard work will pay off, granting them better lives.

The story moves at a comfortable pace and both stories hold the reader’s attention, though I’ll admit I like the earlier story and characters more than the contemporary one. It took awhile to warm up to the female leads in both segments. I found reading the story in two different time periods annoying. It was like reading two separate books at the same time. Some people do that on a regular basis and won’t be bothered by this at all, but I found that each time I got engrossed in one story, it suddenly switched to the other when I just wanted to continue with the one I was reading.

The ending leaves a lot of loose ends dangling, but since we know this is the first of a three book series, that is to be expected. Overall, The Winds and The Waves is both satisfying entertainment and thought provoking social commentary. It also takes a close look at how testimonies are built, the doubts and questions that may still linger after conversion, and how faith impacts spiritual growth.

Dean Hughes has published more than ninety books for readers of all ages. He is perhaps best known among Church readers for his Children of the Promise series. Hughes graduated from Weber State and went on to earn master’s and PhD degrees from the University of Washington. He has taught at Central Missouri State University and Brigham Young University. He and his wife, Kathleen, recently served a mission as public affairs representatives in Nauvoo, Illinois. They are the parents of three children and grandparents of nine. Dean and Kathleen live in Midway, Utah.

COME TO ZION, VOL 1, THE WINDS AND THE WAVES by Dean Hughes, published by Deseret Book, hard cover, 444 pages, $24.99, also available on Kindle